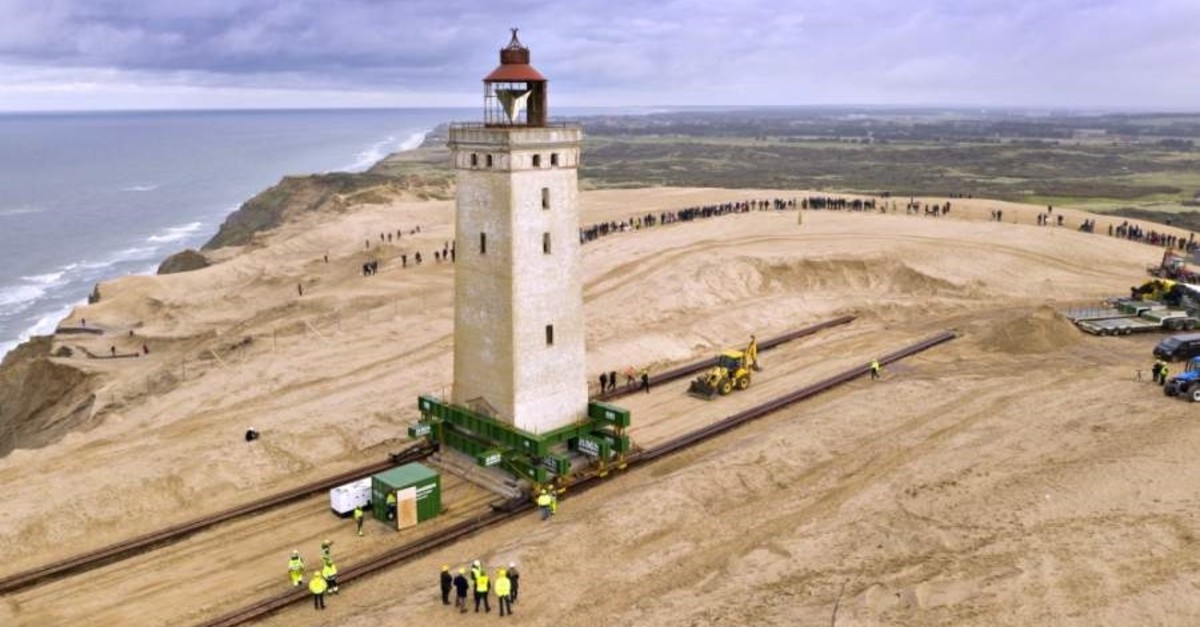 The Rubjerg Knude Lighthouse is being moved on tracks in Jutland, Denmark, Tuesday, Oct. 22, 2019. (AP Photo)
by Associated Press Oct 22, 2019 6:54 pm
A 120-year-old lighthouse was put on wheels and rails and moved back from the eroding North Sea coastline in northwestern Denmark on Tuesday.
The now-defunct Rubjerg Knude lighthouse was moved 70 meters (300 feet) inland, said Kjeld Pedersen, the mason in charge of the move, which took less than the expected 10 hours. Concrete will now be poured around the base of the roughly 1,000-ton structure.
The lighthouse is 23 meters (76 feet) tall and sits atop a cliff 60 meters (200 feet) above sea level.
When it first went into service in 1900, it was roughly 200 meters (656 feet) from the shore. But steady erosion meant that, by the time the move started on Tuesday morning, it was only about 6 meters (19 ½ feet) away.
Denmark's environment ministry spent 5 million kroner ($747,000) to save the building, which officials say would otherwise have to have been dismantled. Environment Minister Lea Wermelin has called the white, square lighthouse "a national treasure."
Local mayor Arne Boelt and the town of Hjoerring also chipped in to foot the bill.
The lighthouse ceased operating in 1968 and was briefly turned into a museum, including an exhibit about the structure's struggle against sand drift.
In the end, it was closed because of shifting sands which slowly buried the two buildings adjacent to the lighthouse. The lighthouse, however, still gets more than 250,000 visitors each year.
The move was broadcast live on major Danish news outlets.
In 2008, a nearby church was dismantled to prevent it from falling into the sea. The Romanesque Maarup Church, built on a cliff around 1250, was picked for scenes in "Babette's Feast," which in 1987 became the first Danish film to win the Oscar for best foreign language film.
Last Update: Dec 20, 2019 1:11 am
RELATED TOPICS