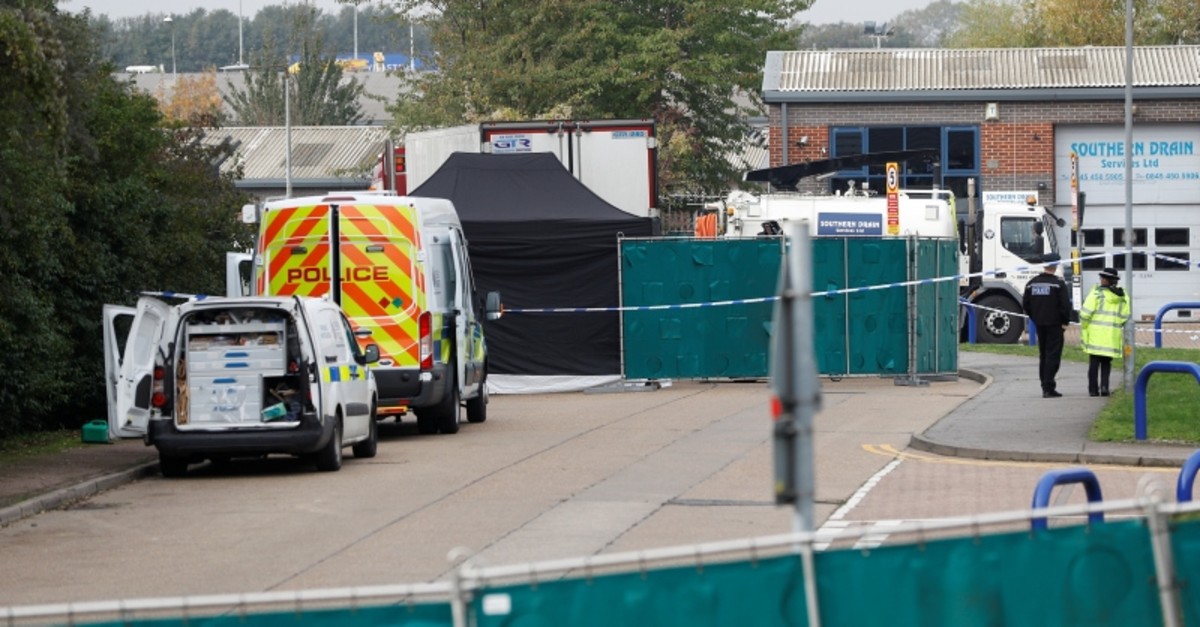 Police is seen at the scene where bodies were discovered in a lorry container, in Grays, Essex, Britain October 23, 2019. (Reuters Photo)
by Compiled from Wire Services Oct 23, 2019 11:49 am

A total of 39 dead bodies were found in a container east of London, highlighting another human tragedy that European countries choose to remain silent over, even with ongoing migrant deaths inside their borders

Police were reconstructing the final journey of 39 people found dead Wednesday in a truck container in an industrial park in England, attempting to piece together one of Britain's worst people smuggling tragedies.

A police motorcycle escort slowly led the Scania trailer-truck out of the park as darkness approached, taking it to a place where the bodies could be recovered. The driver of the trailer wore a full forensic suit and gloves as he guided the massive vehicle in the impromptu cortege past journalists.

"To put 39 people into a locked metal container shows a contempt for human life that is evil," said Jackie Doyle-Price, who represents the area where the truck was found in Parliament. "The best thing we can do in memory of those victims is to find the perpetrators and bring them to justice."

It was not immediately clear where the victims came from or how they came to England. The truck was registered in Bulgaria to a company owned by an Irish citizen, Bulgaria's Foreign Ministry said. Its point of origin was not clear.

British police said they believe the container with the people inside went from the port of Zeebrugge in Belgium to Purfleet, England, where it arrived early Wednesday. Police said they believe the tractor traveled from Northern Ireland to Dublin, where it took a ferry to Holyhead in Wales before picking up the container unit at the dockside in England.

The truck's driver — a 25-year-old man from Northern Ireland — was arrested on suspicion of murder. He has not been charged and his name has not been released.

The Belgian federal prosecutor's office said it's opened its own investigation.

"We have no idea at the moment how long the lorry (truck) spent in Belgium," said spokesman Eric Van Duyse. "It could be hours or days. We just don't know."

Britain remains an attractive destination for immigrants, even as the U.K. is negotiating its divorce from the European Union. In Parliament, Prime Minister Boris Johnson put aside the Brexit crisis and vowed that the people traffickers would be prosecuted to the full extent of the law.

"All such traders in human beings should be hunted down and brought to justice," he said.

Ambulance workers discovered the bodies after being called at 1:40 a.m. to a truck on the grounds of the Waterglade Industrial Park in Grays, 25 miles (40 kilometers) east of London on the River Thames. It was unclear who called the ambulance service.

No cause of death has been made public. Police said one victim appeared to be a teenager but gave no further details.

The number of victims was shocking, although it has become sadly common in recent years for small numbers of migrants to occasionally be found dead in sealed vehicles after having been abandoned by traffickers.

The tragedy recalls the death of 58 migrants in 2000 in a truck in Dover, England, and the deaths in 2015 of 71 migrants from Syria, Iraq and Afghanistan who were found suffocated in the back of a refrigerated truck that was abandoned on an Austrian highway close to the Hungarian border.

The National Crime Agency said its specialists were working to "urgently identify and take action against any organized crime groups who have played a role in causing these deaths." It said in May that the number of people being smuggled into Britain via cargo trucks was on the rise.

Richard Burnett, chief executive of the Road Haulage Association which represents truck drivers in Britain, said: "Our thoughts are with the families of the deceased but whatever the circumstances, it highlights the danger of migrant gangs people-smuggling on lorries."

"People trafficking is a vile and dangerous business," she said.

"Let's hope they bring these murderers to justice."

British Prime Minister Boris Johnson said he was receiving regular updates and sent his sympathies to the victims' families.

"I'm appalled by this tragic incident in Essex," he said.

"My thoughts are with all those who lost their lives and their loved ones."

"Home Office immigration officials will be working closely alongside them to establish how this horrific event came to happen."

Groups of migrants have repeatedly landed on English shores using small boats for the risky Channel crossing, and migrants are sometimes found in the trunks of cars that disembark from the massive ferries that link France and England, but Wednesday's macabre find in an industrial park was a reminder that trafficking gangs are still profiting from the human trade. Police were also investigating a separate incident in which nine people were found traveling in the back of a truck in southeast England.

European leaders have been tackling the refugee crisis both within Europe and along its borders, however the failure in coming up with effective policies has left the problem unsolved. The EU relies on Turkey to curb the arrival of refugees into Europe following a 2016 agreement to seal off the Aegean route after more than 1 million people entered the bloc.

The tragedy of refugees drowning in the Mediterranean Sea on their way to European shores has been coupled with the migrant deaths in places like Calais, France, within the borders of Europe. Asylum seekers from Syria, Sudan, Afghanistan, and Eritrea have made Calais a place in which they hope to use as a crossing point from France to the United Kingdom, whereas French authorities have been restricting their stay in the city while at the same time are demolishing their camps.

Due to the lack of a common response to migration inflows from northern Africa via the Mediterranean, migrants have been facing the same unwelcoming approach from EU countries. So far, every standoff about migrants rescued from the Mediterranean takes weeks to resolve, revealing the limits of EU tolerance and its inherent deficiencies in promptly resolving dire situations. Instead, they get caught up in intra-EU struggles on what to do with migrants saved at sea, while effectively dashing their European dreams.