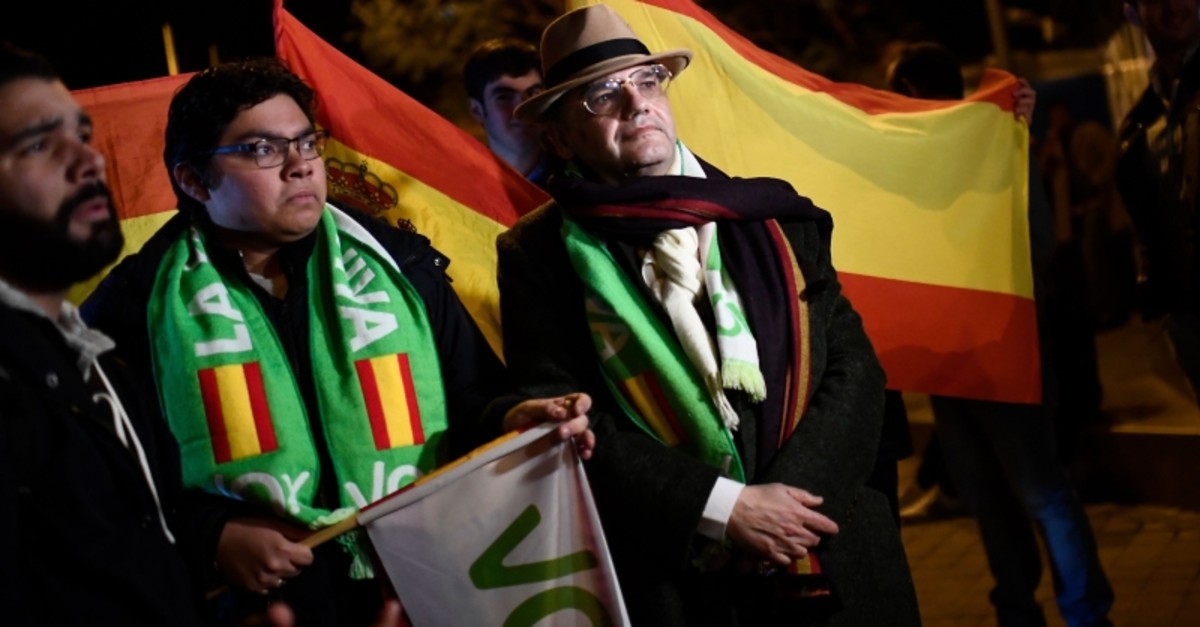 Supporters of Spanish far-right party Vox, hold Spanish flags as they gather outside the party's headquarters during the election night in Madrid on November 10, 2019. (AFP Photo)
by Nov 10, 2019 11:58 pm

Far-right Vox is projected to become the third-largest party in Spain's parliament after Sunday's national election.

It made its debut in parliament as recently as April, marking the first time a far-right party won more than one seat since the country's return to democracy in the 1970s.

A GAD3 opinion poll published shortly after mainland voting ended at 8 p.m. pegged Vox at 56-59 seats in the 350-seat house, up from 24 in the previous election in April. The actual results could still be different as such early surveys are not always accurate, though most other recent ones had projected a similar outcome.

It got its first foothold in office last December, winning 12 parliamentary seats in a regional election in Andalusia.

Vox is aligned with the broader populist movement that has also risen swiftly in other European countries, notably Italy, Austria, Germany, Denmark and France.

One of Vox's founding aims was "recentralization": rewriting the constitution to abolish regional autonomy and parliaments - a theme that has struck a chord with many after a failed independence bid by Catalonia in 2017 and unrest in the northeastern region triggered by the sentencing to jail terms of separatist leaders last month.

Positioning itself as vehemently anti-secessionist, it has berated the caretaker Socialist government for making deals with separatists to win their backing in parliament over the past year, and for failing to maintain order in Catalonia.

Vox has also capitalized on its opposition to the recent exhumation of Fascist leader Francisco Franco - whose legacy still divides opinion in the country 44 years after his death.

Following April's election, Vox struck pacts with the People's Party and center-right Ciudadanos to govern major municipalities including Madrid or Murcia, loosely based on their first regional pact in Andalusia. According to the GAD3 poll, Vox got more votes in Murcia than any other party.

Vox successfully lobbied to remove the former Madrid mayor's signature program - a low-emissions zone in the exceptionally polluted capital - from the governing agreement.

Several opinion polls identified Abascal as the winner of Monday's final pre-election debate as he delivered parts of his campaign message - on immigration, Spanish unity and wasteful public spending - largely unchallenged by his four rivals.

Spain's election board had blocked Vox from participating in debates before the previous election in April, making this Abascal's first time addressing such a large audience as 8.2 million viewers tuned in.

Abascal, 43, is a career politician from the Basque country. Echoing U.S. President Donald Trump's anti-immigration rhetoric, he has called for a wall to be built around the Spanish enclaves of Ceuta and Melilla and for neighboring Morocco to pay for it.

"I am a supporter of discrimination," he told 7TV Andalucia in 2017.

* Repeal the law on gender violence

* Pass a law to protect bullfighting