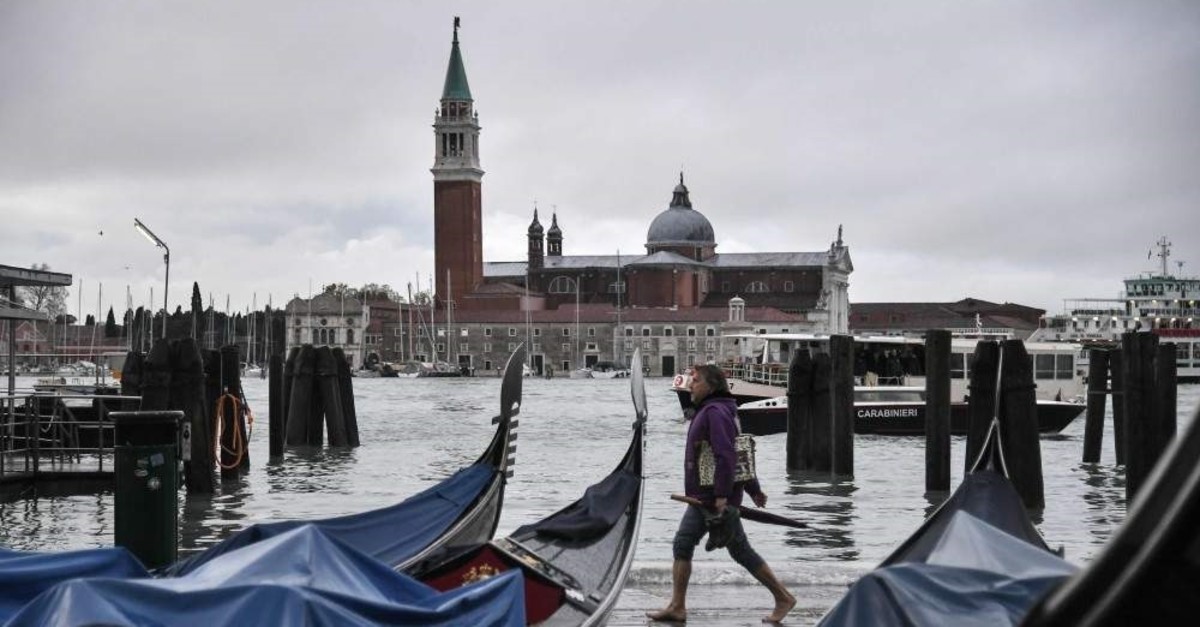 A general view shows flooded St. Mark's Square on the occasion of a high tide, in Venice, Italy, Nov. 13, 2019. (AFP Photo)
by Compiled from Wire Services Nov 13, 2019 11:01 am
Flooding in the canal city of Venice has reached the second-highest level ever, after infamous 1966 floods.
The high-water mark hit 187 centimeters (74 inches) late Tuesday, meaning more than 85% of the city was flooded. The highest level ever recorded was 198 centimeters (78 inches) in 1966.
Venice's mayor blamed climate change for the "dramatic situation" and called for a speedy completion of a long-delayed project to construct off-shore barriers. Called "Moses," the moveable under-sea barriers are meant to limit flooding of the city, caused by southerly winds that push the tide into Venice.
Mayor Luigi Brugnaro said that the flood levels represent "a wound that will leave indelible signs.
As emergency services took to the canals to survey the damage, Italian media reported that a 78-year old local had been killed by electric shock as the waters poured into his home.
The coast guard laid on extra boats to serve as water ambulances.
Tables and chairs set out for aperitifs bobbed along alleyways in the dark, as locals and tourists alike waved aloft inside-out umbrellas, the water slopping over the top of even the highest waders and wellies.
Water taxis attempting to drop people off at the glamorous and historic hotels along the Grand Canal discovered the gangways had been washed away, and had to help passengers clamber through windows.
At the sumptuous Gritti Palace, which has played host to royals and celebrities over the decades, including Ernest Hemingway, Elizabeth Taylor and Richard Burton, the decadent bar was largely underwater.
Rich tapestries were piled onto tables, while the waters lapped around velvet sofas and leather-bound books.
Since 2003, a massive infrastructure project has been underway to protect the city, but it has been plagued by cost overruns, scandals and delays. The plan calls for the construction of 78 floating gates to protect Venice's lagoon during high tides.
St. Mark's Square is particularly affected by the high tides, as it is located in one of the lowest parts of the city. The vestibule of the basilica was inundated with water, and authorities planned to watch the building overnight.
Last Update: Dec 20, 2019 1:39 am
RELATED TOPICS