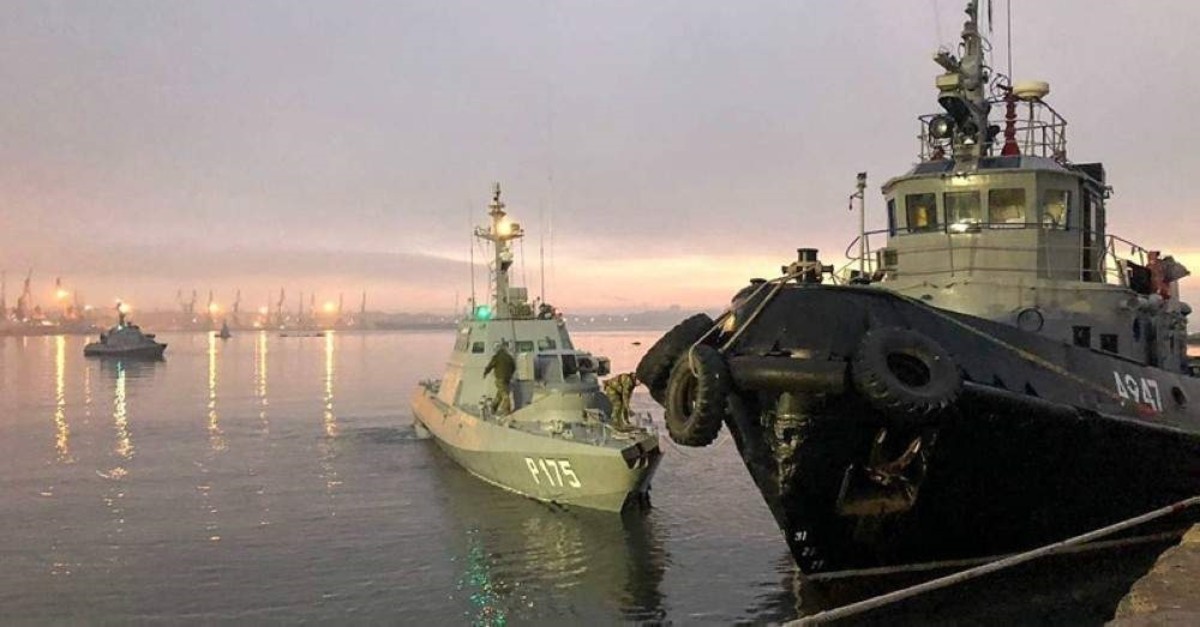 The Nikopol gunboat, the Berdyansk gunboat, and the Yany Kapu tugboat (L-R) of the Ukrainian Navy tugged to the Kerch Seaport. (Photo from the Crimean Branch of the Russian Federal Security Service/TASS)
by Compiled from Wire Services Nov 17, 2019 11:45 pm

Russia’s Foreign Ministry on Monday said three Ukrainian naval ships that were seized in a shooting confrontation nearly a year ago have been returned.

The two gunboats and a tug were taken by the Russian coast guard on Nov. 25, 2018, as they passed through the Kerch Strait that connects the Black Sea with the Azov Sea, en route to their home port in Mariupol.

The Kerch Strait runs between mainland Russia and Russia-annexed Crimea. Russia claimed the ships violated procedures for transiting the strait.

The Russian coast guard fired shots and seized 24 Ukrainian sailors. The sailors were detained for 10 months and returned home in September as part of a prisoner exchange.

On Friday, the French presidency announced a summit involving France, Germany, Russia and Ukraine in Paris on Dec. 9 to discuss ways to resolve the wider conflict in eastern Ukraine.
The summit was made possible by "major advances" since Volodymyr Zelenskiy was elected president of Ukraine in late April, the French presidency said.
Kremlin advisor Yuri Yushakov however did not give a date for the summit in a Russian public television broadcast on Sunday. He said only that it was "still under discussion, but certainly this year."
It was not clear when the interview was recorded.
Since coming to power, comedian-turned-president Zelenskiy has sought to revive the peace process to end a five-year-old separatist conflict in eastern Ukraine, which has claimed 13,000 lives.
Since October, the Ukrainian army and Russian-backed separatists in eastern Ukraine have been pulling back from key front-line areas of the conflict there, a precondition for the summit to take place.
Last Update: Dec 20, 2019 1:45 am
RELATED TOPICS