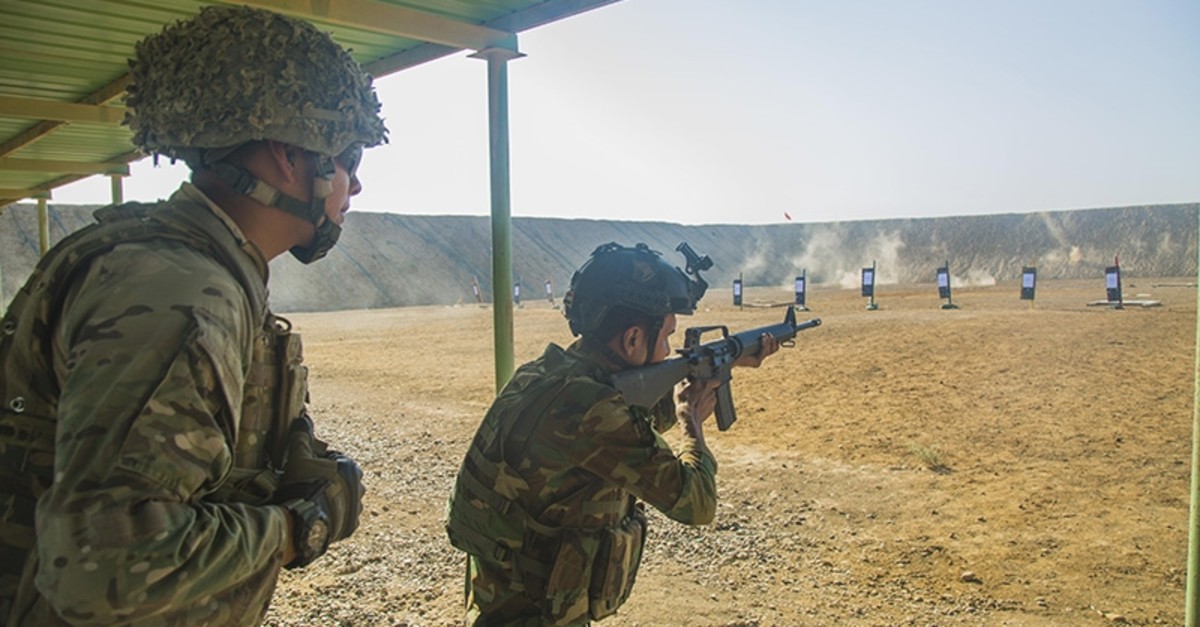 A British soldier supervises an Iraqi soldier assigned to the 71st Iraqi Army brigade as he fires an M16 rifle at a range at Camp Taji, Iraq, Oct. 11, 2015. (Public domain photo by U.S. Army Spc. William Marlow)
by Compiled from Wire Services Nov 18, 2019 1:39 am
A series of leaked government documents suggest the British government and military covered up credible evidence of war crimes by British soldiers against civilians in Afghanistan and Iraq, according to an investigation by the BBC and the Sunday Times.
Leaks from two government-ordered inquiries into the conduct of troops in the conflicts implicated troops in the killing of children and torture of civilians, the investigation found.
The allegations include murders by a soldier from the elite SAS unit, as well as deaths in custody, beatings, torture and sexual abuse of detainees by members of the Black Watch infantry unit.
Military detectives who unearthed evidence of the alleged war crimes told the yearlong investigation by the newspaper and the BBC's Panorama program that seniors commanders hid it "for political reasons."
"The Ministry of Defence (MoD) had no intention of prosecuting any soldier of whatever rank he was unless it was absolutely necessary, and they couldn't wriggle their way out of it," an investigator told the BBC.
The Sunday Times elaborated on the cases under investigation and said the crimes included the murder of three children and one young man shot in Afghanistan in October 2012 by an SAS soldier while drinking tea in their home, widespread abuse of prisoners in the 2003 summer at Camp Stephen, in Basra, Iraq and the deaths of two detainees in custody.
Another crime looked into by the investigators was the fatal shooting of an Iraqi policeman in August 2003, which was covered up based on a soldier's witness account. The soldier later said evidence was fabricated without his knowledge.
The MoD said the allegations were "untrue" and that the decisions of prosecutors and investigators were "independent" and involved "external oversight and legal advice."
The Service Police "have carried out extensive investigations into allegations about the conduct of U.K. forces in both Iraq and Afghanistan," and the independent Service Prosecuting Authority decided not to prosecute any of the cases referred to it, according to the ministry.
The accusations emerged from two war crimes inquiries – the Iraq Historic Allegations Team (IHAT) and Operation Northmoor, which dealt with Afghanistan – which ended in 2017 without any prosecutions.
The government closed the probes after a solicitor, Phil Shiner, who had recorded hundreds of allegations, was struck off from practicing law amid claims he had paid people in Iraq to find clients.
Amnesty International criticized the decision at the time and some former IHAT and Operation Northmoor investigators now allege Shiner's actions were used as an excuse to close down the inquiries as they found wrongdoing at high levels.
The Sunday Times reported military detectives discovered allegations of falsified documents that were "serious enough to merit prosecutions of senior officers."
It reported one of the SAS's most senior commanders was referred to prosecutors for attempting to pervert the course of justice before the inquiries were ended.
The newspaper said the revelations could result in a war crimes investigation at the International Criminal Court if Britain was deemed to have failed to hold its military to account.
Foreign Secretary Dominic Raab told the BBC on Sunday that despite the lack of any prosecutions, it had "got the right balance" in ensuring "spurious claims" were not pursued.
Last Update: Dec 20, 2019 1:45 am
RELATED TOPICS