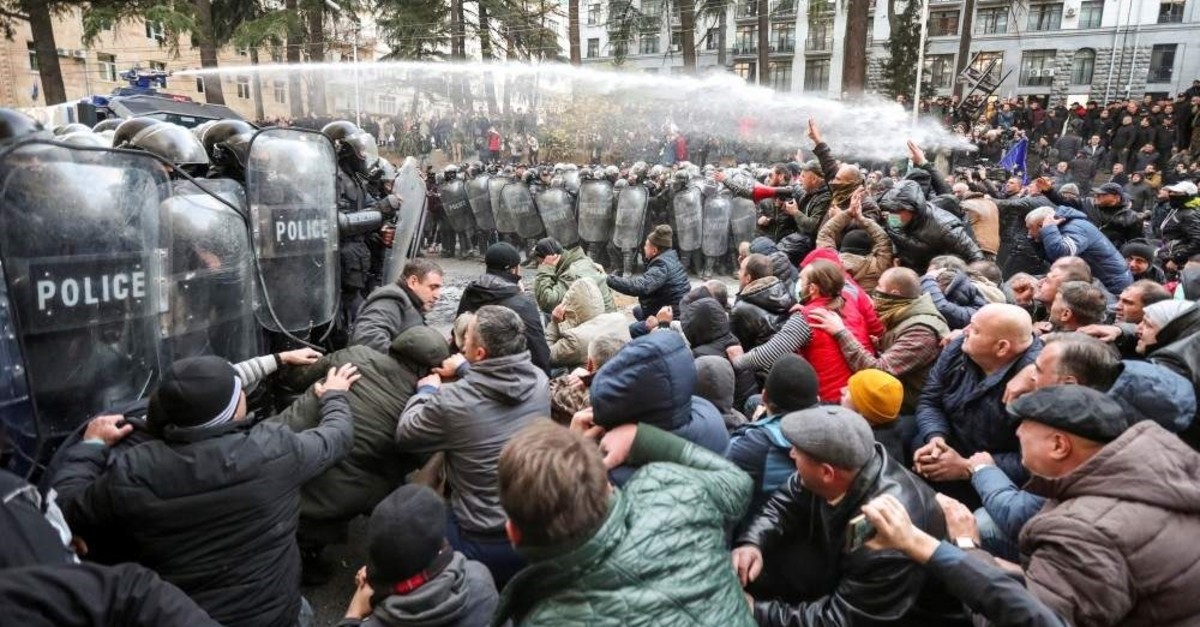 Riot police use a water cannon to disperse demonstrators during a protest against the government demanding an early parliamentary election, Tbilisi, Georgia, Nov.18, 2019. (Reuters Photo)
by Compiled from Wire Services Nov 18, 2019 7:04 pm

Police fired tear gas and water cannons to disperse thousands of protesters near Georgia's parliament and arrested several on Monday, the second day of sizeable protests over the failure of promised electoral reforms.

Officers in black helmets and riot shields advanced down Rustaveli Prospekt, Tbilisi’s main avenue, while other police jostled with demonstrators trying to storm into the parliament.

Police also cleared protesters away from the city's main thoroughfare, Rustaveli Avenue, where they have blocked traffic since last week.

The violence broke out a day after 20,000 people rallied in the center of the Georgian capital Tbilisi to protest against the government and demand an early parliamentary election.

Hundreds of police officers were then deployed to the scene, who gave protesters 30 minutes to disperse before using water cannon and then tear gas against crowds.

One group of protesters remained in front of parliament afterward, some giving speeches on a stage as police looked on.

The demonstrators have held a series of protests after MPs from the ruling Georgian Dream party MPs voted down legislation to hold parliamentary elections next year under a new proportional voting system.

The embassies of the U.S. and EU expressed solidarity with the protesters, saying in a joint statement they "recognize the deep disappointment of a wide segment of Georgian society at the failure of parliament to pass the constitutional amendments."

"We fully support the right to peaceful assembly and freedom of expression," they said.

At a protest on Thursday following the failed vote on the amendments, some 10,000 people rallied in Tbilisi, vowing to press ahead with "permanent" protests until their demands for snap polls were met.