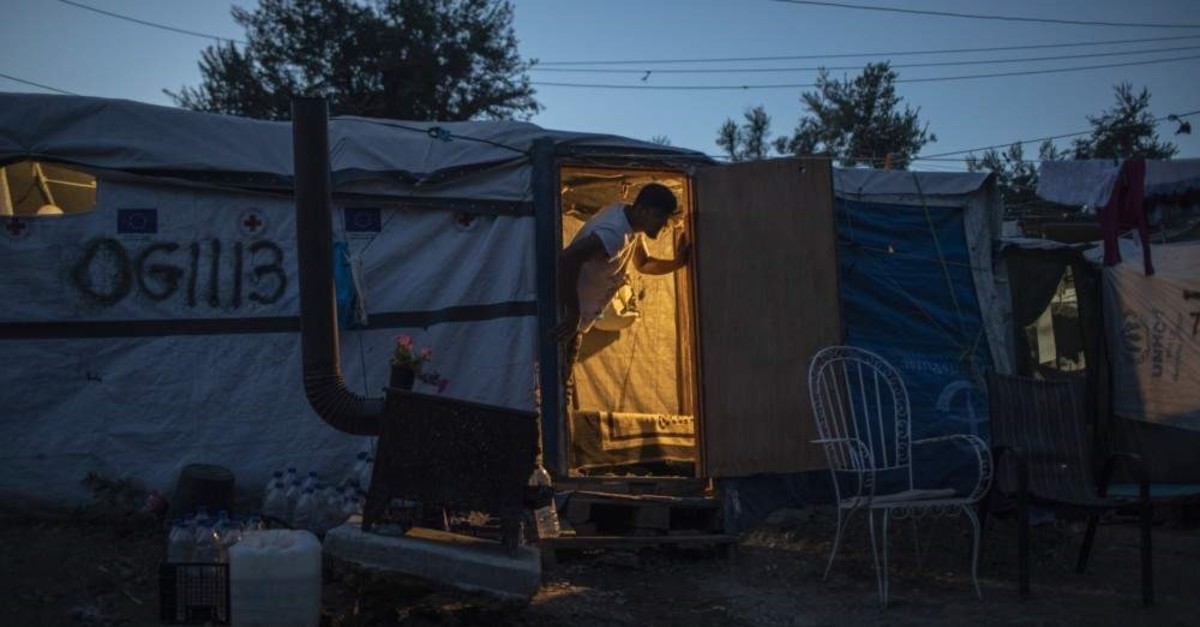 In this Thursday Oct. 3, 2019 photo, an Afghan man looks out of his tent at a makeshift refugee and migrant camp on the fringes of the overcrowded Moria camp on the Greek island of Lesbos. (AP Photo)
by Compiled from Wire Services Nov 20, 2019 3:52 pm

"Decongesting the islands is a priority at this stage," the government's special coordinator for migration Alkiviadis Stefanis, a former army general and chief of staff, told in a news conference.

"These actions are designed to show our determination in dealing with the migrant-refugee crisis," said Stefanis, who is also deputy defense minister.

The government wants to make borders "air-tight" and will hire 400 additional guards for the land border with Turkey and 800 for the islands, he said.

Three camps are to be closed on the islands of Lesbos, Chios and Samos, currently housing over 27,000 people under terrible conditions which have been repeatedly castigated by rights groups. They have a nominal capacity of just 4,500.

The Greek government said it would replace the camps with new closed facilities for identification, relocation and deportation with a capacity of at least 5,000 people each.

Smaller camps on the islands of Kos and Leros are also to be remodeled along these lines and enlarged, Stefanis said.

Instead of being allowed to move freely in and out of the camps, asylum-seekers will now be locked up until they are granted refugee status and relocated to the mainland, or they are rejected and sent back to Turkey, officials said.

In the new camps, asylum-seekers will stay in containers and have access to refectories, schools and places of worship, Stefanis said.

The government has vowed to relocate 20,000 asylum-seekers to camps on the mainland by early 2020.

Government spokesman Stelios Petsas said authorities would create these so-called "closed pre-departure centers," which would make it easier to control the movements of asylum seekers and prevent them from slipping across to the mainland undetected.

"A clear message should be sent to those planning, or thinking of coming to the country illegally when they aren't entitled to asylum," he said.

"They should realize... if they give money to a trafficker to bring them to Greece they will lose it."

According to government figures, there are over 37,000 asylum-seekers on the islands, and hundreds arrive daily, capitalizing on mild weather conditions.

The International Organization for Migration (IOM) says there are an additional 22,000 people in camps on the mainland, which are nearly full or already past capacity.

The new conservative government which came to power in July has already passed a law stiffening asylum requirements for migrants, which was criticized by rights groups as harmful to the interests of vulnerable asylum-seekers.

Stefanis on Wednesday also said new criteria would be issued for the operation of nongovernmental organization (NGO) groups helping migrants.

"Only those (NGOs) that meet the requirements will stay and continue to operate in the country," the migration coordinator said.

Referring to pending asylum requests, Stefanis said: "The numbers are huge which is why we introduced a law which from Jan. 1 will speed up the process."

Aid agencies have expressed misgivings about the new framework.

The government will also improve health facilities in areas receiving asylum-seekers, and set aside a fund of 50 million euros ($55 million) for works in municipalities who agree to cooperate.

There have been protests in several towns in northern Greece in recent weeks to block attempted relocations of asylum-seekers.

"It cannot go on like this," Mitsotakis told German newspaper Handelsblatt.

"Europe regards arrival countries such as Greece as a convenient parking spot for refugees and migrants. Is that European solidarity? No! I will no longer accept this."

Mitsotakis insists that most new arrivals to Greece are "economic migrants" from Afghanistan or sub-Saharan Africa rather than refugees from war-wracked Syria.