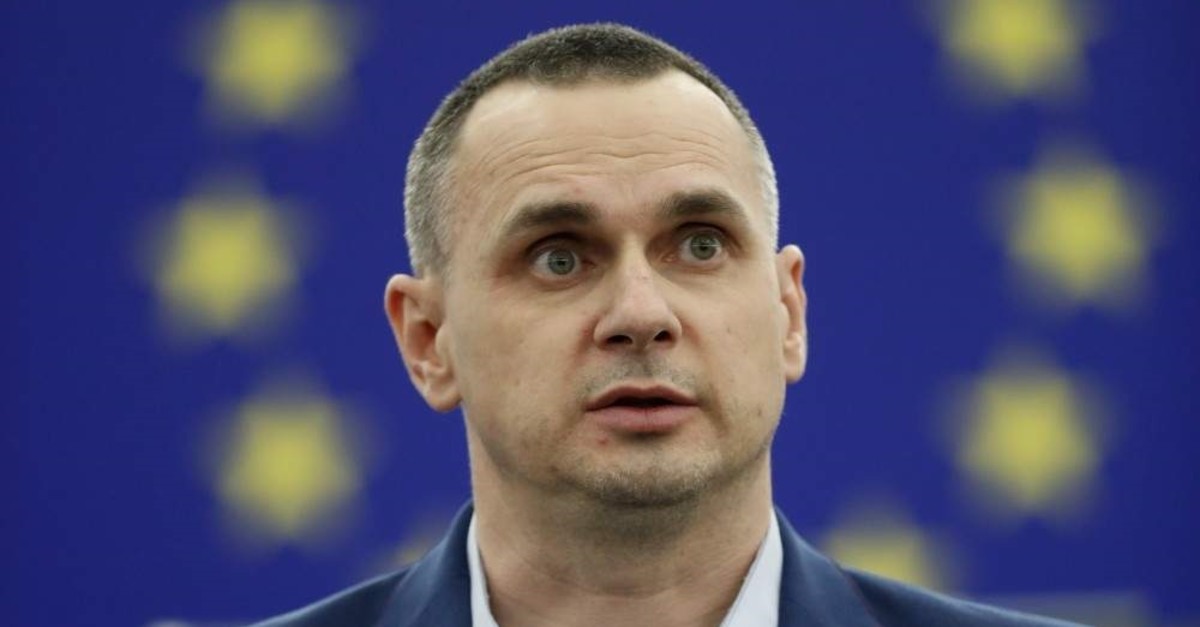 Ukrainian filmmaker Oleg Sentsov delivers his speech at the European Parliament Tuesday Nov. 26, 2019 in Strasbourg, eastern France. (AP Photo)
by Compiled from Wire Services Nov 26, 2019 4:32 pm
A year after he won Europe’s top human rights award, Ukrainian filmmaker Oleg Sentsov finally picked up the prize Tuesday, following his release from a Russian prison where he was held on terror charges.
Sentsov, who was arrested in Crimea after Russia annexed the Ukrainian territory in 2014, was awarded the Sakharov Prize for Freedom of Thought last year while he was still in jail.
"It's a huge honor and also a huge responsibility. I accept this prize as a prize for all Ukraine political prisoners who have been in Russian prisons," Sentsov told the European Parliament after it handed him the award.
Accepting the award at the European Parliament in Strasbourg, France, Sentsov warned European lawmakers to be wary of Russian President Vladimir Putin’s overtures as peace talks approach and called on them to remember the Ukrainians killed and jailed by Russia.
"I don't trust Mr. Putin and I call upon you not to trust him either. Russia and Putin will without a doubt cheat you. They don't wish for peace in Donbass or Ukraine. They want to see Ukraine on its knees,” Sentsov said.
Sentsov described Ukraine’s hopes for close ties with the European Union as "a question of survival as a nation,” and he urged the lawmakers to think twice before cozying up to the Russian president.
"Please remember thousands of those who have fallen in Ukraine. Please remember hundreds of our young men who are languishing behind bars who might be subject to torture even as we speak,” he said.
Sentsov served five years of a 20-year sentence in a prison colony in Russia’s Arctic far-north, for conspiring to commit acts of terrorism. He was freed in a prisoner swap in September. He opposed Russia’s 2014 annexation from Ukraine of his native Crimea region, and staged a 144-day hunger strike to protest the jailing of dozens of Ukrainians in Russia.
Sentsov rejects the charges and has described his prosecution as a political vendetta. Prominent political and cultural figures around the world joined the campaign for his release.
He pleaded not guilty at the time and denounced his trial as politically motivated. He was among 35 Ukrainian detainees who were swapped on Sept. 7 in exchange for an equal number of prisoners that Russia wanted to bring home.
The prize, named after Soviet dissident and nuclear physicist Andrei Sakharov, is awarded annually by the European Parliament to people who "have dedicated their lives to the defense of human rights and freedom of thought."
Last Update: Dec 20, 2019 1:56 am
RELATED TOPICS