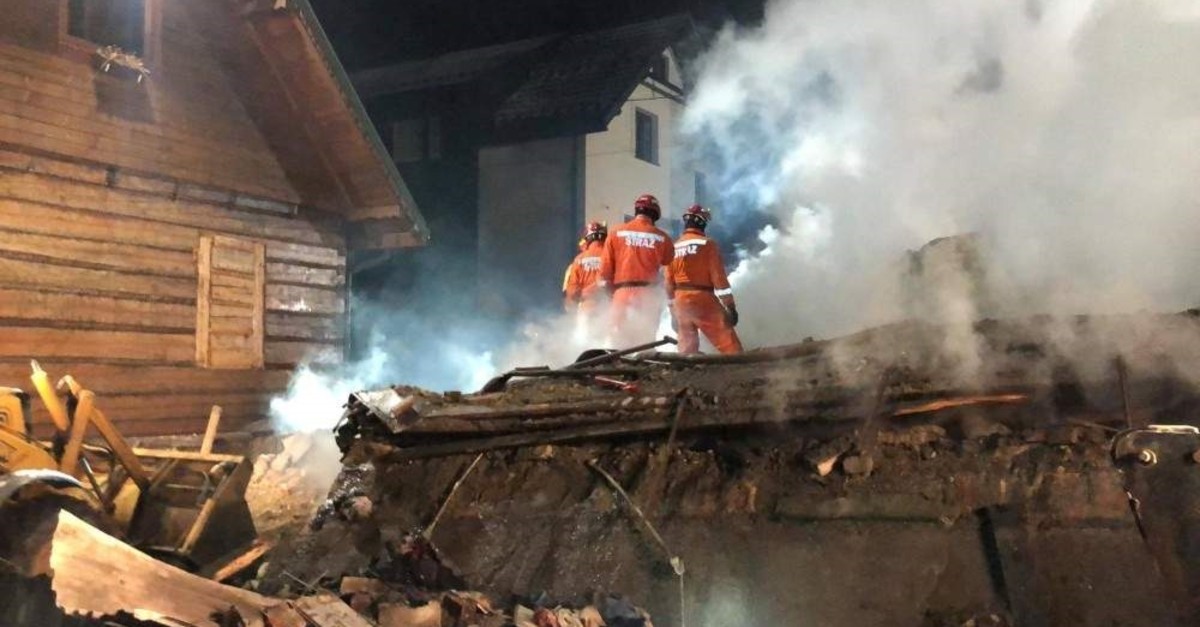 Firefighters work at the site of a building, leveled by a gas explosion, in the ski resort town of Szczyrk, Poland, Dec. 5, 2019, in this image obtained from social media. (Radio Bielsko via Reuters)
by Compiled from Wire Services Dec 05, 2019 9:45 am
Four people have died and four are missing after a three-story building in the southern Polish ski resort of Szczyrk collapsed on Wednesday following a gas explosion, officials said Thursday.
Silesia provincial Gov. Jaroslaw Wieczorek said the bodies of three adults and a child have been found in the rubble so far.
Rescuers continue to comb by hand through the debris in search of those missing, Wieczorek said.
Head of regional firefighters, Jacek Kleszczewski, said about a half of the debris had been checked and the action now focused on cutting through the collapsed ceiling structures.
Earlier Thursday, firefighters said that nine members of two families lived in the three-story building. One person was not at home at the time of the explosion Wednesday evening.
Up to 100 firemen and 50 police officers are on the scene, Polish state broadcaster TVP reported. Footage on TVN24 showed firefighters and rescuers working through a huge heap of bricks that remained of the house.
The temperature is sub-freezing and there is some snow in the southern mountain resort of Szczyrk where the explosion occurred.
Officials suspect a leak during work on a gas pipeline caused the explosion.
Prosecutors were on the site and are investigating.
A spokesman for Poland's gas company, Artur Michniewicz, said that after the blast, authorities cut off gas for a large part of the town for security reasons.
Last Update: Dec 20, 2019 2:09 am
RELATED TOPICS