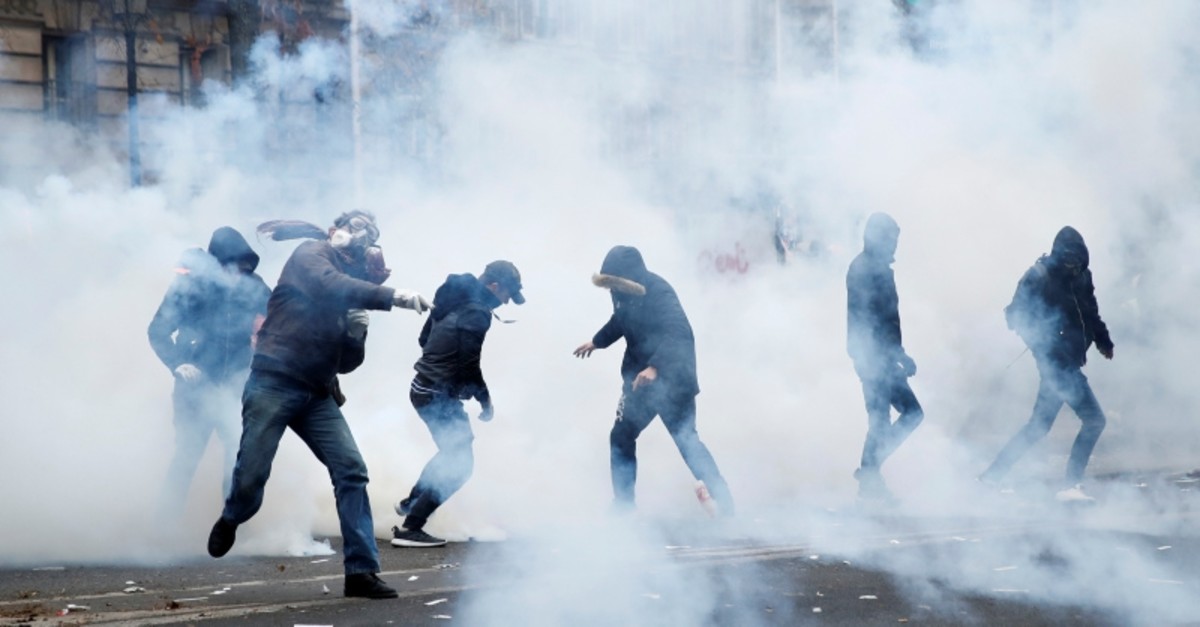 A nationwide strike brought much of France to a standstill on Thursday as tens of thousands hit the streets to protest a pension overhaul by President Emmanuel Macron, which unions say will force millions of people to work longer or face curtailed benefits.

Trains, metros and buses and some flights were canceled while most schools were closed or only assuring daycare services, forcing many parents to find alternatives or stay home from work.

Authorities said around 285,000 people had taken part in rallies across the country by midday, a figure that did not include the several thousand at a Paris march that began at 2 pm.

"We haven't seen such a turnout in a very long time," said Yves Veyrier, head of the Force Ouvriere union at the beginning of the Paris rally toward the Place de la Nation.

"We now expect the government to take the measure of this mobilization, and understand that its universal system is a bad idea," he said.

Police also fired tear gas in the western city of Nantes, where some protesters scuffled with firefighters and security forces.

Public transport unions said they would extend until at least Monday their open-ended strike, which saw 90% of TGV and regional trains canceled and nearly all lines on the Paris metro affected.

Rush-hour traffic was lighter than usual in the French capital as many people simply took the day off to avoid the travel chaos, with several stores and restaurants shuttered because employees could not get to work.

National newspapers were unable to publish their print editions, and the CGT union said workers had blocked seven of the country's eight oil refineries, raising the prospect of fuel shortages if the strike continues.

The SNCF rail operator said 90% of TGV trains would again be canceled Friday while warning of "very severe disruptions" for the Eurostar and Thalys trains serving London and Brussels.

Air France said it would again cancel 30% of its domestic flights, and 10% of its short-haul international routes.

'Not just about pensions'

Macron has faced a wave of opposition this year, from the yellow vest movement demanding improved living standards to more recent protests from police, firefighters, teachers, hospital workers and lawyers.

"I'm not just here about pensions, the health service is our business, public services and also the general drift of the government to the right in general," said Pierre Malige, a 42-year-old professor of mechanics at the University of Nantes, at a protest in the city.

But so far Macron, a former investment banker who came to power on the back of a promise to transform France, has largely succeeded in pushing through a series of controversial reforms, including loosening labor laws and cutting taxes for businesses.

Union leaders are demanding that Macron scrap his plan for a "universal" system that would do away with 42 "special regimes" for sectors ranging from rail and energy workers to lawyers and Paris Opera employees, which often grant workers higher pensions or early retirement.

Critics say the changes would effectively require millions of workers in both the public and private sectors to work beyond the legal retirement age of 62 if they want to receive the full pension they have been promised.

"This is going to concern everybody, not just part of the population," said Franck, a 46-year-old worker at the automaker PSA, makers of Peugeot and Citroen vehicles, during a demonstration in Rennes, western France.

"Nobody can imagine having to work until you're 70 years old," he said.

Travelers are facing the prospect of days of chaos, with the SNCF already halting all train ticket sales until Monday.

"I'm a bridesmaid for the wedding of my childhood friend, in Cologne (Germany) tomorrow afternoon, so obviously I can't cancel my trip but this is making me really nervous," said Nicole Schafhausen, who was waiting at the Gard du Nord station in the capital.

The Eiffel Tower and the Orsay museum were shut because of staff shortages, while the Louvre, the Pompidou Centre and other museums warned that some wings and exhibits were closed.

Meanwhile yellow vest protesters, who have staged weekly demonstrations since last year demanding improved living standards, blocked roads in several cities including Le Havre on the Atlantic coast, where the heavily used port was also shut according to the CGT.