Protest in Minsk as Belarus eyes closer integration with Russia 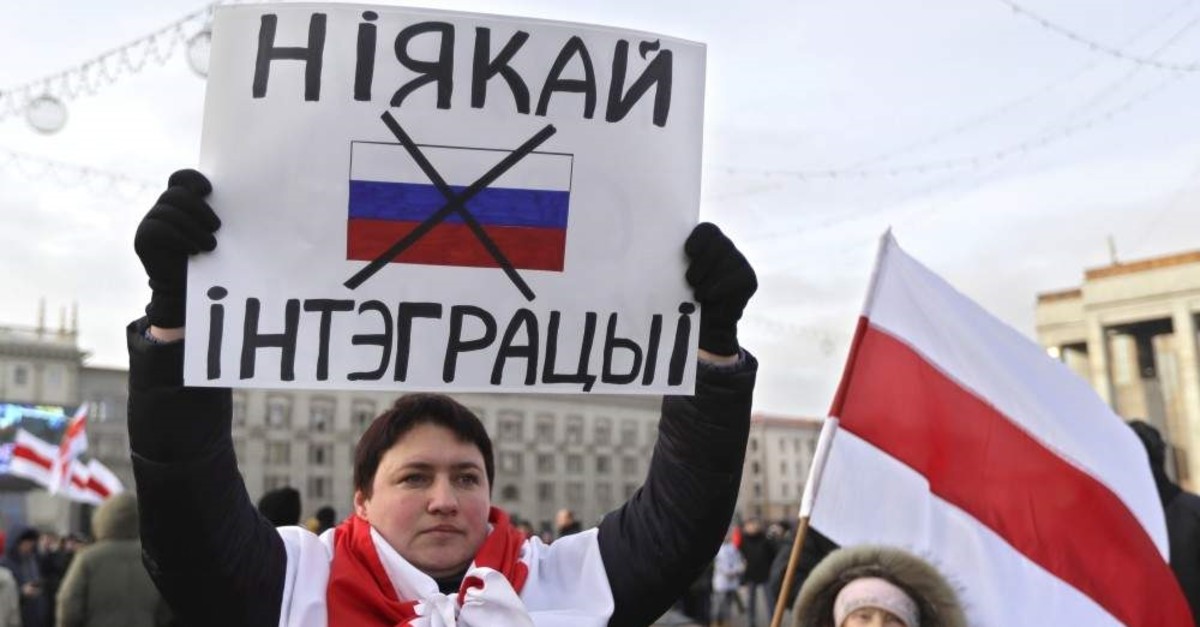 A protester holds a banner reading 'No to integration!' during a rally in downtown Minsk, Belarus, Saturday, Dec. 7, 2019. (AP Photo)
by Compiled from Wire Services Dec 07, 2019 7:17 pm
Leaders of Russia and Belarus sat down for talks Saturday on deepening ties between the two allies — a meeting that triggered a protest in the Belarusian capital.
Roughly 1,000 Belarusians joined an unauthorized demonstration Saturday against the prospect of a closer union with Russia.
Angered by the potential deal, crowds of mostly young people headed toward the government headquarters in capital Minsk carrying signs that read "it's not integration, it's an occupation" and "the president is selling our country." Many waved EU flags or those of the opposition. Police quickly intervened to oversee the demonstration but made no arrests.

Russian President Vladimir Putin hosted Belarusian President Alexander Lukashenko for talks in Sochi, on Russia's Black Sea coast, to discuss economic agreements intended to bring the two ex-Soviet neighbors and allies even closer. Lukashenko, who has ruled Belarus with an iron fist for more than a quarter-century, relies on cheap Russian energy and loans to maintain a Soviet-style economy.

Russia and Belarus signed a union agreement in 1997 that envisaged close political, economic and military ties, but stopped short of forming a single state

The Kremlin has recently cranked up pressure on Belarus, raising energy prices and cutting subsidies. Russian officials noted that Minsk should accept closer economic integration if it wants to benefit from lower energy prices.

Speaking at the start of talks in Sochi, Lukashenko urged Putin to continue fuel shipments at Russia's domestic prices.

“We just want equal conditions — nothing else,” Lukashenko said with a wry smile as he faced Putin across the table.

“We shall talk about future prospects. It's a landmark meeting,” Putin said.

Land-locked Belarus, sandwiched between Poland, Ukraine and Russia, is one of Moscow's main allies in Europe, although relations are often tense.

Some 49.9% of Belarusians want to remain completely independent of Moscow, according to a survey by the Minsk Academy of Sciences published this week. Those in favour of a union with shared political institutions numbered 36% and 7.7% wanted full unification, the poll suggested.

Some in Belarus fear that the new agreements could pave the way for a full merger — concerns fueled by Russia’s 2014 annexation of Ukraine’s Crimea.

There also has been speculation that Putin, who has been in power for nearly two decades, could contemplate a merger with Belarus as a way to stay at the helm of the union state of Russia and Belarus after his current presidential term expires in 2024.