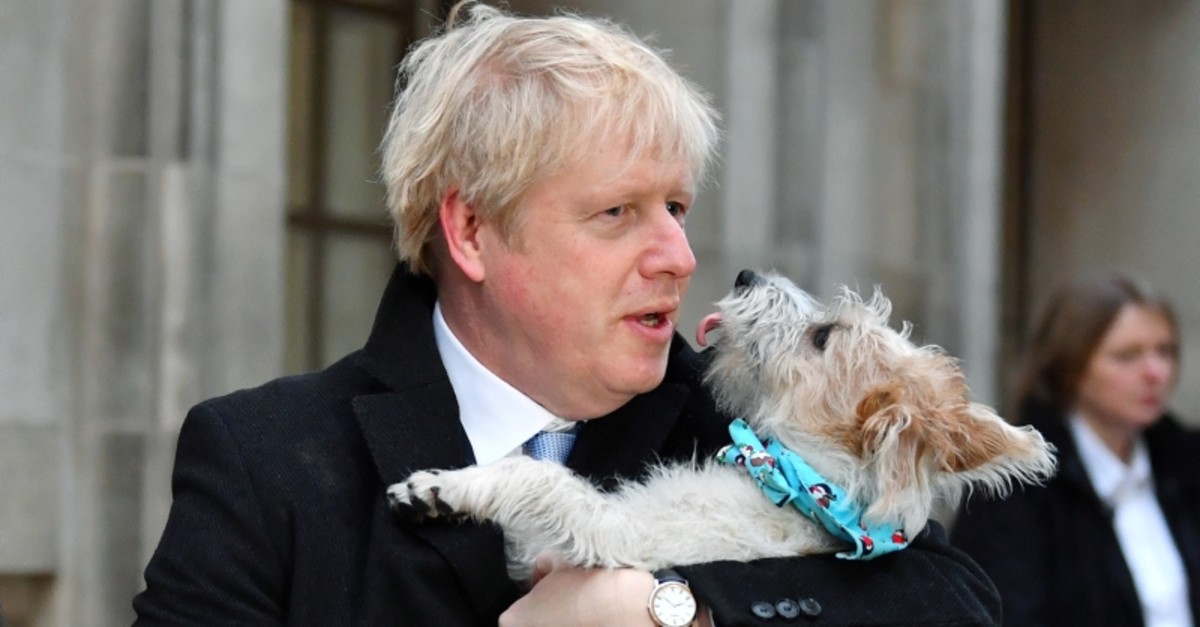 Britain's Prime Minister Boris Johnson holds his dog Dilyn as leaves a polling station, at the Methodist Central Hall, after voting in the general election in London, Britain, December 12, 2019. (Reuters Photo)
by Associated Press Dec 13, 2019 2:02 am

The "Brexit election" saw the Conservatives capture a bulk of the seats in Parliament and securing a comfortable majority. With the best election result in decades, Brexit in January now looks to be a realistic possibility. Of the 650 seats available, the Conservative Party secured 365 by amassing 43.6% of the votes, up by 47 seats from the 2017 election, while it needed a minimum of 326 seats to secure a majority. The main opposition Labour party got 203 seats after losing several dozens to the Conservatives in their traditional strongholds, mainly in northern and central England

Sticking to his narrative from the very start of his role as prime minister, Johnson, who campaigned largely on a pledge to "Get Brexit Done," proved to be very confident about his ability to push through with Brexit on Jan. 31. He declared on Friday that he would now look to "get on with Brexit," after emerging victorious from the single-most-important election that the U.K. has experienced in a generation.

Johnson claimed to have given his government "a powerful mandate" for Brexit as he secured a leading majority in Parliament under Britain's constituency-based, first-past-the-post system. "I will put an end to all that nonsense, and we will get Brexit done on time by Jan. 31, no ifs, no buts" announced the prime minister on Friday, following his victory.

Even though Johnson looks confident in his plan, there are still processes that he must first overcome. Whether there will be a second Brexit referendum will depend on the British Parliament's vote on the agreement. Johnson currently seems to ignore this fact, as he stated on Friday in his speech that a second Brexit referendum is not possible. "This election means that getting Brexit done is now the irrefutable, irresistible, unarguable decision of the British people," he said. "And with this election, I think we put an end to all those miserable threats of a second referendum," he added.

Charles Michel, the president of the European Council, along with other EU leaders urged Prime Minister Johnson to ensure clarity on Brexit as the EU expressed its willingness to protect their own economic interests in the possible trade talks ahead. The possibility of a failure in Parliament's vote on the agreement from Johnson's part currently looks to be the U.K.'s last chance for a Brexit alternative. Some British commentators suggested that a large majority meant Johnson was no longer tied to the extreme anti-EU members of his party, enabling him the ability to push for a softer Brexit, which is considered to be better for the economy.

Some EU leaders are confident that Johnson will follow through with his words as they will brace for new trade negotiations to take place with Britain leading to Jan. 31. The EU commissioner for internal markets, Thierry Breton, announced Friday that Johnson's Parliament would accept a withdraw deal, and that Britain's post-Brexit phase would start in February.

Labour, on the other hand, crumbled as it experienced a historic defeat under the leadership of Jeremy Corbyn. The results were partly blamed by the British media on Corbyn's ineffectiveness during the whole campaign and defended the idea that Labour has been its worst in decades.

The party experienced huge disappointment as they lost many seats in Parliament compared to the last election and allowed the Tory's to get a majority. Corbyn himself has been heavily criticized in his own party, and many of Labour's remaining centrists were pointing the finger of blame at him. Former Minister Ben Bradshaw described him as "overwhelmingly negative" on the doorstep.

After suffering two defeats in his bid to become Britain's prime minister, Corbyn has said he will not lead the party in the next election and will resign. Johnson will now look to secure a majority vote by Parliament and resume talks with the EU to get Brexit done by January.