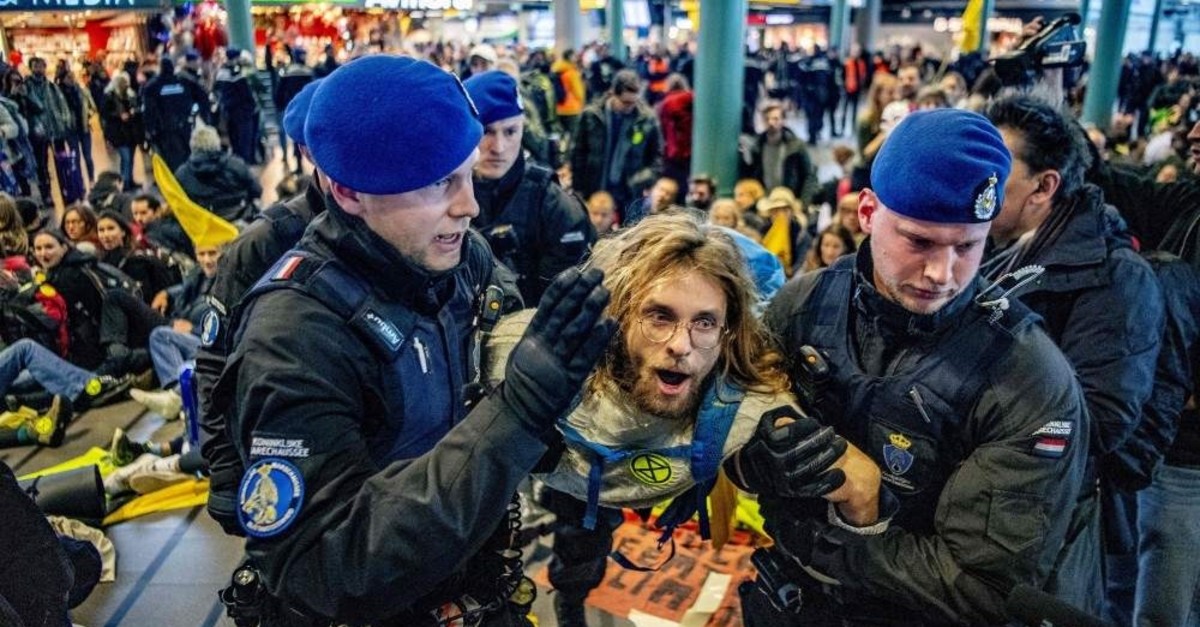 Royal Dutch police officers escort a Greenpeace activist during a protest to denounce airline pollution in the main hall of the Amsterdam Schiphol airport on December 14, 2019. (AFP Photo)
by Compiled from Wire Services Dec 14, 2019 6:53 pm

Hundreds of protesters had arrived for a demonstration against "the big polluter" Schiphol organized by Greenpeace, which had been granted a permit to protest outside the building only. The group rejected that condition, saying citizens' rights to peaceful protest should not be restricted.

A group of around 100 activists from Greenpeace and Extinction Rebellion gathered inside the airport's entrance hall, chanting slogans for "climate justice" and carrying signs including one that advised travelers to "take the train."

One protester chained himself to a pillar during the unauthorized rally inside the shopping mall that leads to the arrivals and departures section of the airport.

More than two dozen police officers had watched the demonstrators before arresting them and leading them outside to a waiting bus among clapping and cheers.

"After multiple warnings to leave Schiphol Plaza peacefully, the Marechausse has now begun arresting Greenpeace protesters," the Dutch security force said in a statement, stating that were "being relocated." Dutch media reported the group was being dropped off outside the Haarlemmermeer municipal boundary where Schiphol is located.

"The first bus with protesters has left," said the Royal Dutch Marechaussee, the paramilitary police responsible for airport and border safety.

Demonstrators were also gathering outside Schiphol airport for a legal protest under the eye of the Dutch police, some on horseback, Amsterdam's AT5 television news showed.

Activists from Greenpeace told the crowd: "Schiphol is one the biggest airports in Europe and yet they still want to expand it. That's not normal!"

"Schiphol must come with a climate plan," one of the Greenpeace organizers said, adding that activists planned to stage a 24-hour protest at the air hub.

In its call to activists to attend the protest, Greenpeace said on its website: "We're in the middle of a climate crisis, but the big polluter Schiphol is being allowed to keep growing and polluting even more."

The protesters want to force airport authorities to adopt urgent measures to reduce CO2 emissions in the aviation industry.

This included reducing flights, scrapping short-distance flights in favor of using trains and stopping the planned upgrade of an airport at nearby Lelystad to accommodate more holiday destination flights.

Schiphol spokesman Hans van Kastel said no flights were so far disrupted by the demonstration.

He told AFP that the airport – which saw 71 million passengers pass through its gates last year – already had a climate plan in place.

"We realize that more is needed," Van Kastel said. "This would involve more energy-efficient and cleaner aircraft, electrically-powered flight and the use of sustainable fuels."

The passenger figures in 2018 saw a 3.7% increase from the year before at Schiphol, which has flights to and from 326 destinations around the world.