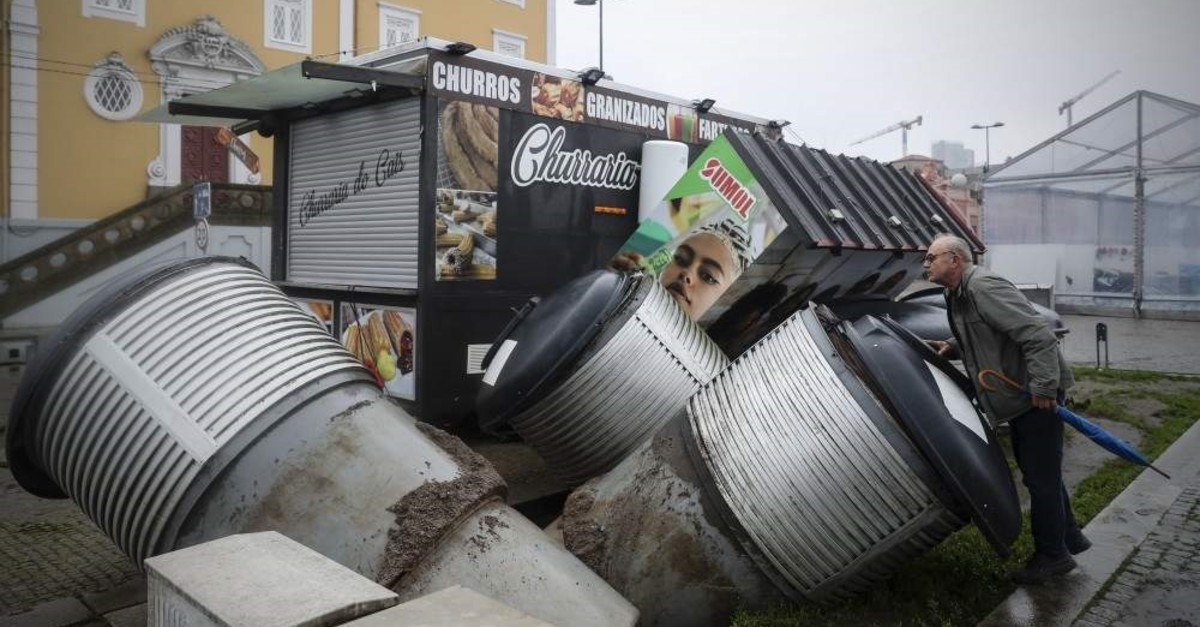 A man examines the damages caused by flooding at Gaia Quay in Vila Nova de Gaia, Portugal, Dec. 21, 2019. (EPA Photo)
by Dec 21, 2019 8:27 pm
The death toll from a storm that battered Spain, Portugal and France rose to eight on Saturday as the region braced for more violent winds and heavy rain.
A 32-year-old South Korean woman died Saturday, a day after being struck on the head by falling debris from a building in central Madrid, the Madrid region's interior minister said Saturday.
The building had passed an inspection in 2015 "but weather like this, with heavy rain and wind, causes these fateful cases," Enrique Lopez told reporters.
A man died Saturday after his car was swept away by a swollen river near the town of Huescar in the southern province of Granada, the regional government of Andalusia said in a statement.
Emergency services in the southwestern region of Andalusia said a 68-year-old Dutch man who went missing while windsurfing in rough weather in Huelva province Friday had drowned.
Those three deaths bring to eight to the number of fatalities from the storms that have battered Spain, Portugal and southern France overnight Thursday to Frida
Storm Elsa flooded rivers, brought down power lines and disrupted rail and air travel across the region.
Five of the deaths have been in Spain and two in Portugal, where the extreme weather interrupted train services between the capital Lisbon and the second city Porto after flooding on the rail tracks.
A weakened Storm Elsa was now over Britain, but the authorities in France, Portugal and Spain all warned of a fresh threat.
Storm Fabien has already brought winds of 170 kilometres (105 miles) per hour in Galicia in northwestern Spain.
Spain's national weather office has put the entire coast of Galicia and the neighbouring region of Asturias on red alert on Saturday – the highest in its four-scale alert scale – due to strong winds and high waves.
Eight Madrid city parks remained shut Saturday because of the strong winds.
Parks and cemeteries were also closed in Bordeaux in southwestern France on Saturday while the Arlette Gruss circus, which had set up in a big tent in the city's main square, canceled three performances.
France's weather office placed 14 regions in the southwest of the country on orange alert Saturday expecting winds of up to 140 kilometres an hour on the coast.
Officials on the French Mediterranean island of Corsica said all the island's airports would be closed Sunday because of the approaching storm. Ferry services to the mainline have already been suspended.
Last Update: Dec 21, 2019 9:57 pm
RELATED TOPICS