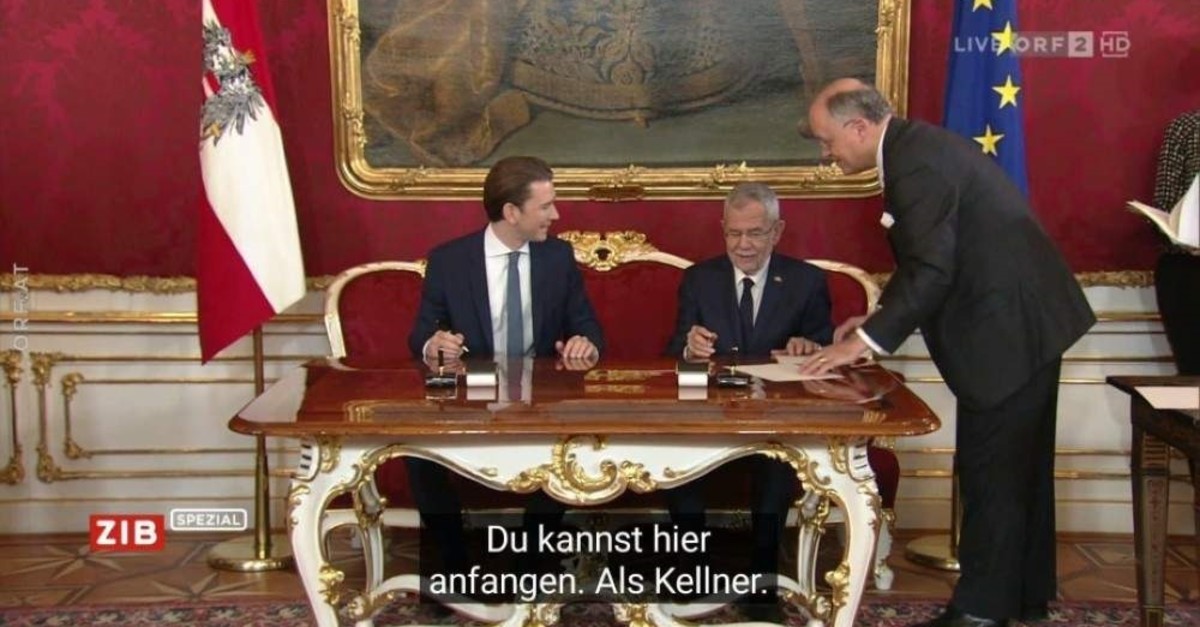 Austrian public broadcaster ORF added a bizarre touch to the swearing-in of the new conservative-Green coalition government when it mistakenly ran subtitles from a telenovela.

The incident went viral Wednesday after it mistakenly aired with soap opera subtitles of "Alisa – Follow Your Heart," suggesting he was offering the president a job as a cleaning lady.

Kurz was sworn in Tuesday as the world's youngest democratically elected leader at the head of an unlikely coalition with the Greens following the collapse of his Conservatives' previous alliance with the far-right.

The subtitles appeared on the ORF public television website in a rerun of the ceremony led by President Alexander Van der Bellen, lending a surreal air to the event in the luxurious Hofburg Palace in Vienna.

Excerpts of the broadcast, which carried text from the German soap opera that had run just before, went viral with the amusing words.

"What's up, you little chick?" Bellen seemed to be telling 33-year-old Kurz.

Under footage of Kurz with the president, the caption had a quote inquiring if he was "interested in a job as a cleaning lady."

When the new minister of defense shook the head of the state's hand, the subtitle said, "Thanks, Daddy."

With a frame of all the members of the new government assembled, the subtitle ran, "It's wonderful to have all the children under the same roof."

In an apparent commentary over a frame in which Kurz appeared in a corner with Van der Bellen, the words appeared, "Not him again."

Kurz had led the government from December 2017 until May 2019 before the eruption of a political crisis provoked by his then main far-right ally.

ORF acted quickly to fix the gaffe saying: "The wrong subtitles were immediately removed and replaced with the right ones," ORF said in a statement. "Steps will be taken to avoid a repeat of this kind of error."

The live broadcast Tuesday went off without a hitch.