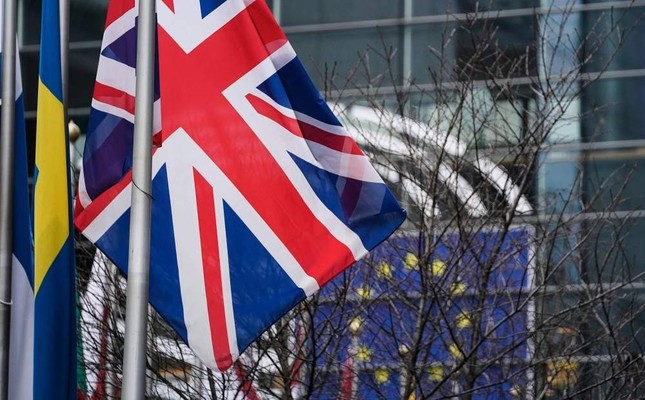 A picture taken on Jan. 23, 2020 shows the European Union flag and the British Union Jack waving in front of the European Parliament in Brussels. (Photo by AFP)

The Brexit Saga is officially set to finalize by the Jan. 31 deadline, as Brussels' top two officials signed it at a closed-door ceremony in the dead of night Thursday.

President of the EU Council Charles Michel confirmed on Twitter that he signed the agreement along with EU Commission President Ursula von der Leyen.

Thursday also saw Queen Elizabeth II giving her formal assent to the British withdrawal legislation and the European Union is now expected to complete the final formalities in the coming days.

The institutions of the union will be reduced to 27 member states after Britain officially exits the EU, however, the withdrawal agreement provides for an 11-month transition period until the end of the year.

During this time, Britain and the rest of the bloc will continue to apply the same rules of business to avoid economic disruption while officials try to negotiate a broader trade deal.

After the transition, Britain wants the right to set its own rules in areas such as workers' rights and environmental standards.

Brussels has warned that the more the U.K. diverges from EU standards, the less it will have unfettered access to Europe's huge single market.

As current things stand, the political deadlock that has captured Britain and caused increasing divisiveness in the region for the past three years looks to be nearing its end.

Share on Facebook Share on Twitter
Previous in Europe Six people have been killed and several were injured in a shooting... Next in Europe France's hard-left trade unions on Friday threatened industrial action...
DAILY SABAH RECOMMENDS