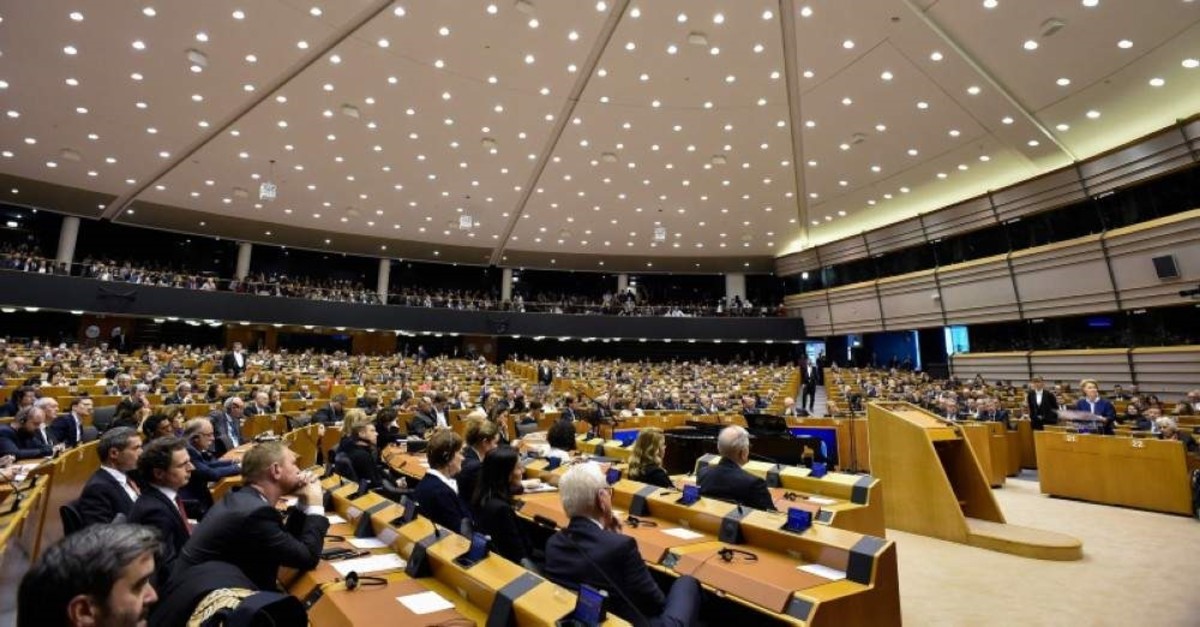 The European Parliament on Wednesday voted overwhelmingly to approve the Brexit deal with London, clearing the final hurdle for Britain's departure from the EU.

The vote at the parliament in Brussels, which came after an emotional debate, was passed by 621 to 49, prompting MEPs to burst into a chorus of "Auld Lang Syne," a traditional Scottish song of farewell.

The European Parliament was poised to overwhelmingly approve the departure of the U.K. from the EU – the final major decision in the four-year Brexit saga. Yet at the same time, EU nations are already preparing for the possibility that talks on a new trade deal with Britain could collapse by the end of the year, and no-deal contingency planning for a chaotic end to the transition period is necessary.

After Britain's departure on Friday, the U.K. will remain within the EU's economic arrangements until the end of the year though it won't have a say in policy as it will not be a member of the EU anymore.

"We will always love you and you will never be far," said EU Commission President Ursula von der Leyen on a day when some legislators were moved to tears.

Britain is the first country to leave the EU and for many in Europe its official departure at 11 p.m. London time on Friday, Jan. 31 is a moment of enormous sadness and reduces the number in the bloc to 27.

The parliament's chief Brexit official, Guy Verhofstadt, said that "this vote is not an adieu," adding that it is "only an au revoir."

With only two days to spare, legislators voted to approve the withdrawal agreement that will end the 47-year membership of Britain. At the same time, the vote will cut the 73 U.K. parliamentarians from the 751-seat legislature where die-hard Brexiteers have been a disruptive force for years.

"That's it. It's all over," said Nigel Farage, who has campaigned for Brexit for two decades.

On departing the scene, the man who arguably did more than anyone else to move the country to vote for Brexit waved Britain's Union Flag. Now, negotiations move on how to cooperate in the future.

Britain is seeking to thrash out a comprehensive trade deal within 11 months. That timetable is viewed as ambitious by many observers of trade discussions, which can often drag on for years.

"We will not yield to any pressure," French President Emmanuel Macron said. " The priority is to define, in the short, medium and long term the interests of the European Union and to preserve them.”

The EU has said such a timespan is far too short and fears remain that a chaotic exit, averted this week, might still happen at the end of the year if the transition ends without any agreement in place.

"The urgency of the 11 months of the calendar should in no way lead us to rush, to accept compromises that would hurt our interests," said Macron's Europe minister, Amelie de Monchalin. "A trade accord is an agreement that lasts for several decades and we should ensure that we always put fundamental issues of content before calendar issues.”

Even though the European Commission's task force, led by Michel Barnier, is negotiating on the EU's behalf, the impact of major nations like France and Germany on those talks is important. De Montchalin said that unless Britain asks to extend the transition period before the summer, both sides will be facing a cliff-edge scenario by the end of the year where borders could be closed, tariffs imposed and rules changed overnight, to the detriment of smooth trade. "That’s why we had long discussions this morning on the need to prepare for such a scenario, through contingency measures that we have to keep active to be ready for all eventual scenarios,” de Montchalin said in Paris.