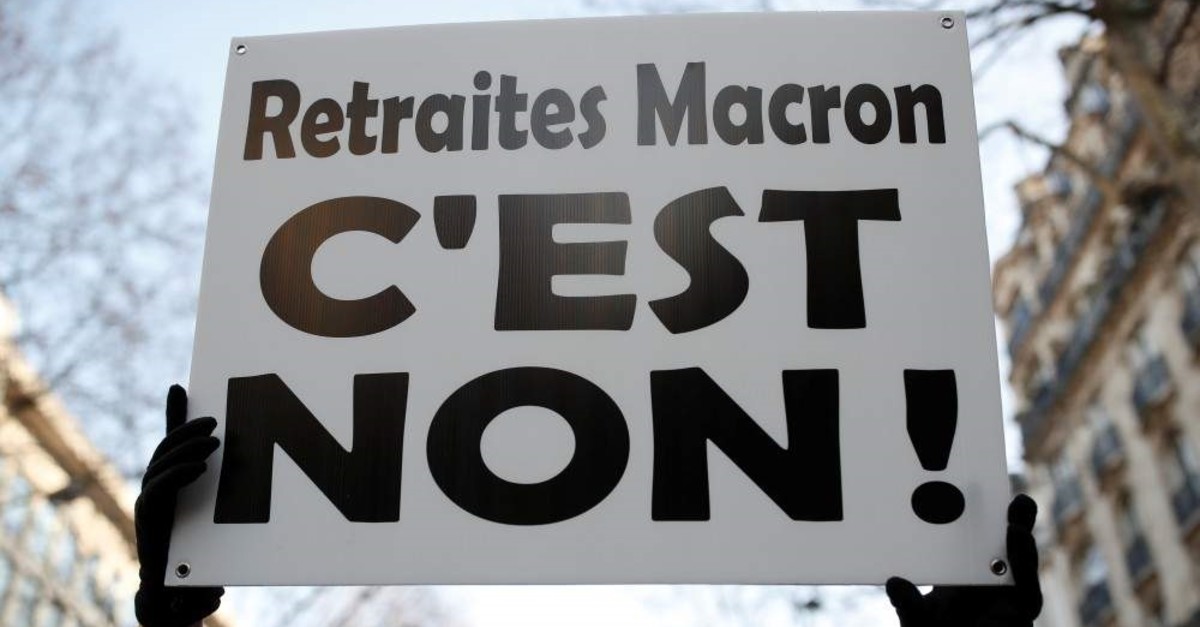 A demonstrator holds a placard which reads ,No to Macron's pensions reform, during a demonstration against French government's pensions reform plans in Paris as part of another day of nationwide strikes and protests in France, Jan. 24, 2020. (REUTERS)
by Daily Sabah with Agencies Jan 30, 2020 5:34 pm

France has been engulfed in chaos, protests for the last 14 months as President Emmanuel Macron's concessions, so far, have proved unsuccessful in calming down anger on French streets

The footage coming out of French cities in recent days has revealed unabating anger, violence and terror on the streets as French President Emmanuel Macron has been unsuccessful to appease citizens for the past one and a half year, starting from the anti-establishment Yellow Vests protests.

Lately, there have been instances of protesting firefighters setting themselves on fire and a large group of riot police, in uniform, squaring up before piling onto each other for a mass brawl. This ongoing unrest in France underscores the sheer level of violence and fury that is directed toward its political establishment and police who enforce their will. The protests are in danger of spiraling out of control.

Defying weeks of nationwide protests against pension reforms, President Macron, while keen to make progress in talks with unions, is still determined to push through with his pension reform plans. Unions have also refused to back down on Macron's reforms. The outcome appears to depend on who gives in first.

This week saw clashes between firefighters and police on the streets of Paris. Violent scenes were shared across social media, showing police using tear gas and batons against the protesters. The protest by firefighters, who in France also respond to general emergency calls, was the latest to hit Paris in recent weeks as unions battle controversial government pension reforms. The firefighters are demanding a special salary premium that acknowledges the risks of their job to be brought in line with that of the police, staff levels maintained, and the preservation of their existing pension system.

France has been gripped by protests and strikes since Dec. 5 over President Macron's controversial pension reform plans. The French government's deepest concern seems to be the possibility of these events snowballing into a continuation of the Yellow Vest Movement by reigniting it.

France's far-right leader, Marine Le Pen, decried the chaos and violence that has engulfed her country in the last 14 months under President Macron's rule, saying that she is "the only candidate to beat an out-of-touch and elitist president," in an interview with the Financial Times Thursday.

"Emmanuel Macron is the last gasp of the old system," she said. "He was presented as a new broom, and look what we've got. France has been mired in violence for 14 months. He said in 2017, 'It's me or chaos,' and we've had uninterrupted chaos since he took power." After her defeat in France's 2017 general election, Le Pen's resurrection in the next election seems highly possible as she has tapped into the anger of France's anti-establishment yellow vest protesters, many of whom share her views, especially on the dangers of mass immigration to the dominance of Paris over the rest of France.

Despite a series of concessions, including a pledge to police, pilots and many transport workers that they will still be able to stop working before the official retirement age, the Macron government has largely held firm with a reform promised by Macron during his 2017 presidential campaign. He says the new system will be more transparent and fairer, in particular to women and low-income workers such as farmers. Macron also appears determined to succeed where previous governments have failed when tackling France's sprawling pension system. So far, the strikes appear to have only mildly dented France's economy overall, though many businesses reported steep revenue declines over the crucial holiday shopping season, especially in Paris.

The worst of the strikes on the Paris public transport system has now petered out, but the hard-line unions have vowed not to give in. The rallies were marred by vandalism and clashes with security forces, often by far-left "black bloc" protesters, leading to dozens of injuries and arrests. But the government has faced accusations of condoning heavy-handed police tactics after a series of videos showing officers striking detained marchers or firing rubber bullets at point-blank range drew outrage on social media.