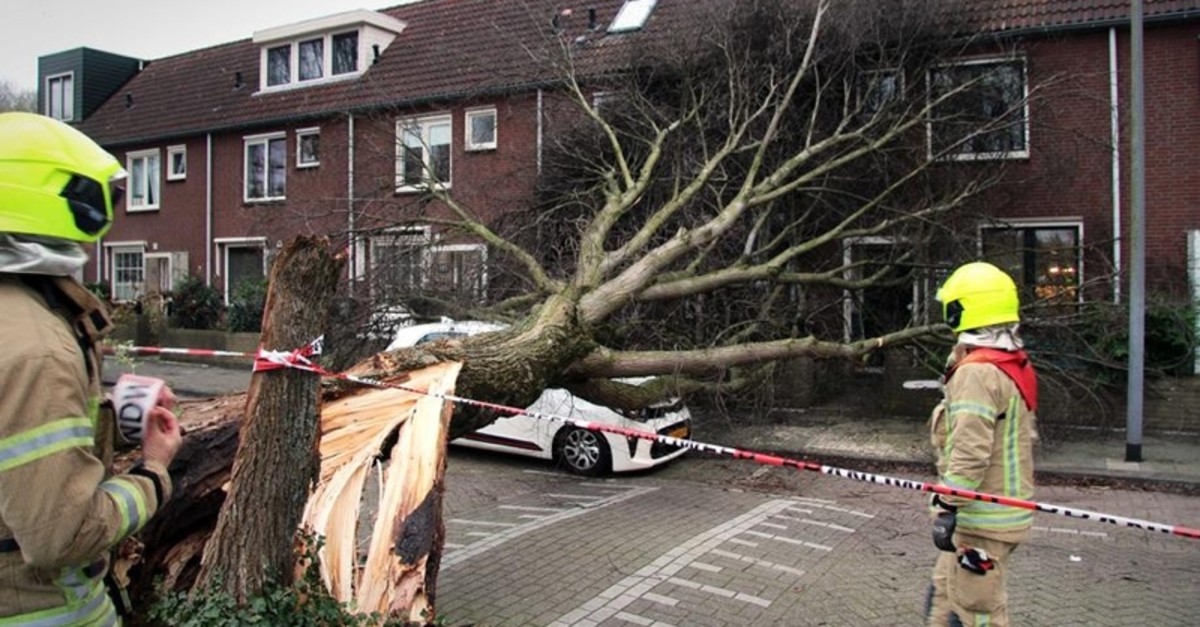 Hundreds of flights and train services were canceled across northwest Europe on Monday as Storm Ciara swept in, packing powerful winds after lashing Britain and Ireland, where tens of thousands of homes were left without power.

Swathes of northern France were put on orange alert, and 130,000 homes had electricity cut off amid fears of coastal storm surges.

Ciara was heading south through France on Monday with the electricity network company Enedis reporting outages from Brittany in the west to the country's center and east.

Meteo-France noted wind speeds of 130 kilometers per hour along the coast and predicted highs of 200 kph.

Trees and electricity poles were blown over and roofs ripped off homes across 31 departments, fire and rescue services said.

Britain, which bore the brunt of the storm Sunday with widespread flooding across the north, remained on alert with the Meteorological Office warning of strong winds, heavy rain and snow.

"It's going to stay very unsettled," he said, warning "blizzards aren't out of the question."

Transport was disrupted across the country with planes, trains and ferries canceled or delayed after Ciara brought torrential rains and hurricane-force winds.

The highest wind speed recorded was 150 kph in the northwest Welsh village of Aberdaron.

More than 170 flood warnings remained in place early Monday, mostly across northern England and along the southern coast.

The West Yorkshire towns of Hebden Bridge and neighboring Mytholmroyd were among the worst hit by the storm, with streets inundated and cars submerged in the floodwaters.

As of Sunday evening, 62,000 homes across Britain were still without electricity, the Energy Networks Association said.

Dozens of flights have been canceled or delayed, and rail companies have urged passengers not to travel and operated reduced timetables and speed restrictions.

Channel ferry services between Dover and the French port of Calais resumed Monday morning after being halted Sunday.

In Ireland, which was on orange alert for the risk of flooding in coastal regions, 10,000 homes, farms and businesses were left without power.

Belgium was also on orange alert and around 60 flights to and from Brussels had been canceled. In the capital, trees and scaffolding were toppled and some buildings damaged, but there were no injuries.

The whole Belgian offshore wind farm was shut down as powerful gusts caused the turbines to stop automatically for safety reasons.

The storm was so violent that "we are forced to completely stop mainline train traffic in Germany this Sunday evening," Deutsche Bahn spokesman Achim Stauss told Agence France-Presse (AFP).

Several airports in Germany had to cancel flights as the storm swept in from the north. Frankfurt, Berlin, Munich, Cologne and Hanover were among those affected, while at Dusseldorf, 120 flights were scrapped on Sunday.

About 240 flights to and from Amsterdam Schiphol, the third-busiest airport in Europe, were also canceled, largely affecting KLM, British Airways, easyJet and Lufthansa services.

Sunday's English Premier League fixture between Manchester City and West Ham was called off due to "extreme and escalating weather conditions", City said in a statement.

The entire Women's Super League football program was also called off, as was Sunday's Scotland-England clash in the Women's Six Nations rugby tournament.

And for British Airways there was one upside to Storm Ciara -- the airline recorded its fastest-ever flight between New York and London, thanks to tailwinds from the storm.

According to flight-tracking website Flightradar24, it completed the transatlantic crossing in a mere four hours 56 minutes, the fastest sub-sonic crossing.