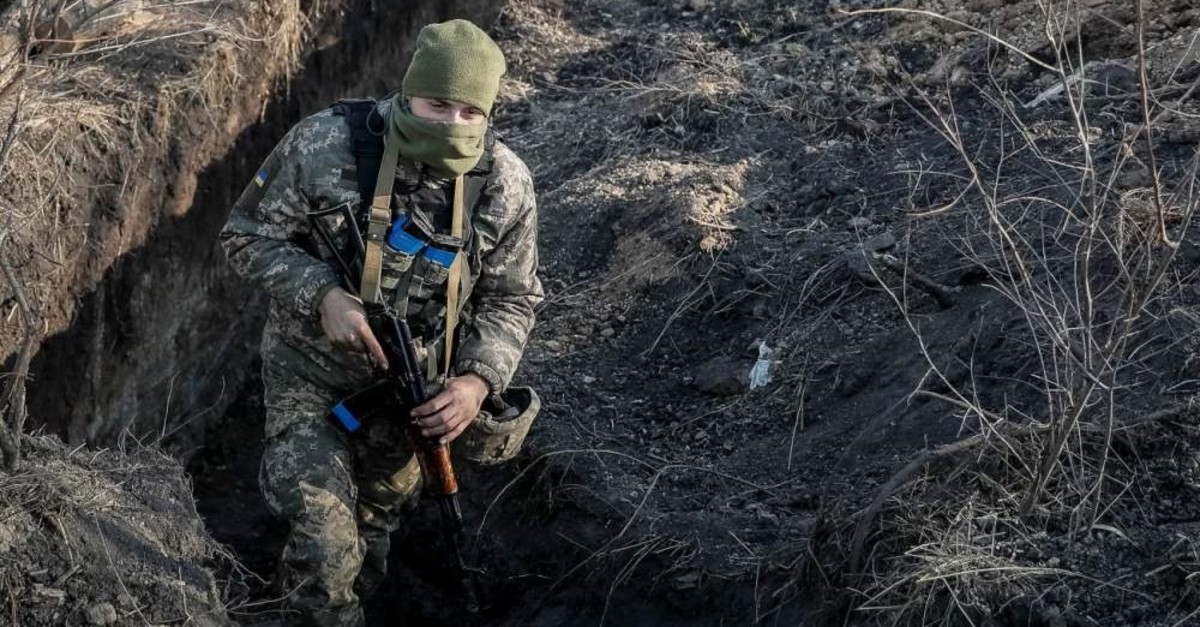 A serviceman is seen in a trench at a position on the front line near the village of Zolote in the eastern Ukrainian region of Luhansk, Nov. 2, 2019. (REUTERS)
by Compiled from Wire Services Feb 18, 2020 3:35 pm

One Ukrainian soldier was killed and four injured on Tuesday as Kyiv accused Russian forces of using heavy shelling to try to breach Ukrainian lines in the eastern Donbass region.

Ukraine's military said in a statement that separatists attempted to advance into the Ukrainian-controlled territory but were repelled. It said one Ukrainian soldier was killed and four others were wounded. Ukrainian President Volodymyr Zelenskiy announced he would convene a Ukrainian security council meeting to discuss the fighting, calling it a "cynical provocation" and an attempt to disrupt the peace process. The separatist authorities in the Luhansk region, however, blamed Ukraine for initiating the fight. They said the Ukrainian shelling damaged civilian infrastructure in the villages of Kirovsk and Donetskiy.

The exchange of gunfire marks the latest spike in hostilities in the separatist conflict in eastern Ukraine that has killed over 14,000 people since 2014.

The skirmishes came as Ukraine and Russia geared up for another summit, alongside the leaders of France and Germany, to try to end the conflict. Zelenskiy came to power last year promising to end the war. Ukraine and Russia have implemented some confidence-building measures, including prisoner swaps and phased troop withdrawals in designated areas. Zelenskiy and Russian President Vladimir Putin spoke on the phone last week, Zelenskiy's office said.

Ties between Ukraine and Russia deteriorated after Russia annexed the Crimean Peninsula in 2014 and backed separatist fighters in eastern Ukraine. Ukraine says Russia then engineered quasi-separatist uprisings, which later escalated into a full-scale conflict. Russia denies doing so. Two so-called "people's republics" have formed in the Donetsk and Luhansk industrial regions of eastern Ukraine, also known as Donbass.

The December 2019 summit in Paris was the first time the leaders of Russia, Ukraine, France and Germany met under the so-called Normandy format since 2016. The group takes its name from a meeting of the countries' leaders in Normandy in 2014. The February 2015 Minsk Agreements, agreed to by the leaders of Russia, Ukraine, France and Germany, set out the necessary steps to stop violence against civilians in eastern Ukraine. Putin represented the separatists at peace talks with German Chancellor Angela Merkel in 2015 in Belarus, resulting in a package of peace agreements known as the Minsk II accords; however, the U.N. warned last year that the agreements have remained "largely unimplemented."