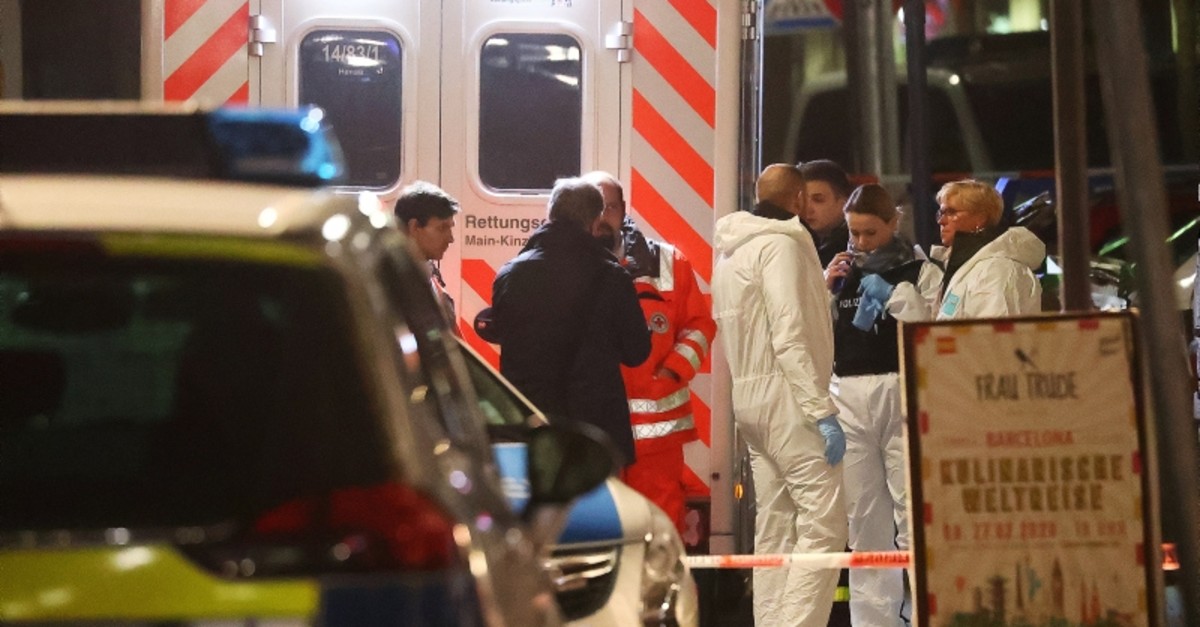 Five Turkish citizens were among nine people fatally shot in the central German city of Hanau, Turkey's Ambassador to Berlin Ali Kemal Aydın said Thursday, in attacks that appear to have been motivated by far-right beliefs.

A 43-year-old German man first attacked a hookah bar and a neighboring cafe in central Hanau at about 10 p.m. Wednesday, killing several people, before heading about 2.5 kilometers (1.5 miles) west and opening fire again, first on a car and then a sports bar, claiming more victims.

"I am confident the German authorities will make every effort to shed light on all aspects (of the attacks)," Erdoğan said.

Chancellor Angela Merkel said that while the circumstances of the attack still needed to be fully investigated, the shootings exposed the “poison” of racism in German society and pledged to stand up against those who seek to divide the country.

Merkel pledged that “everything will be done to investigate the circumstances of these terrible murders."

"This hatred exists in our society and it is responsible for far too many crimes," she added, citing the killings committed by a far-right gang known as the NSU, the shooting of a regional politician from her party last year and the attack on a synagogue in Halle in October.

Hanau is about 20 kilometers (12 miles) east of Frankfurt. It has about 100,000 inhabitants. Hookah lounges are places where people gather to smoke flavored tobacco from Middle Eastern water pipes also known as shishas.

Witness Kadir Köse ran over from a cafe he runs nearby after he heard the first shots, initially assuming there was an altercation between family members.

“But when I heard the second shots I thought it was a terror attack,” Köse said.

He said he was shocked at the extent of the violence, saying that while fights or stabbing aren’t unheard of, “this is a whole other level, something we hear about from America.”

Ali Kemal Aydın, the Turkish ambassador in Berlin, told TRT Haber that the latest shooting increased the number of Turkish victims from racist attacks in Germany to over 30 in the last three decades.
Aydın identified one of the victims as Gökhan Gültekin, a 37-year-old man whose family is from the eastern Turkish province of Ağrı. Aydın said he met Gültekin’s father Behçet and found out harrowing details about the victim. He said the young man was preparing to get engaged to his girlfriend.
Aydın called the Turkish community in Germany to act in unity and solidarity against such attacks. “German politicians have a great responsibility too,” he said, for reacting to the far-right attacks. “Taking necessary, strongest, the most strict measures are important for Germany’s security and future,” he said.

One of the injured victims, identified as Muhammet, spoke to Turkish media outlets Thursday and were in recounting the moments of the attack. “I heard some five or six gunshots outside and then saw the man (the assailant) entering in. I was eating there along with other customers, some 12 people. He killed everyone in the other place,” said Muhammet, who was at the Arena cafe.
“He was shooting people in the head and then walked towards us and started firing. I was trying to hide behind a wall, but he shot me on my arm. I fell on the ground, and someone else fell on me. I saw I was lying on top of someone else, and I saw a hole in his neck. He told me, ‘Brother, I can’t feel my tongue.’ I told him to recite shahada (an Islamic creed a dying Muslim ought to say as last words). We shouted and asked everyone to say shahada but everyone was quiet,” he said.
Witnesses and surveillance videos of the suspect's getaway car led authorities quickly to his home, near the scene of the second attack, where he was found dead near the body of his 72-year-old mother, said Peter Beuth, the interior minister for the state of Hesse. Both the suspect and his mother had gunshot wounds, and the weapon was found on the suspect, Beuth said.

A website believed to be the suspect's is being evaluated, Beuth said.

“Initial analysis of the web page of the suspect indicates a xenophobic motivation,” he said. It does not appear, however, that the suspect was known either to police or Germany's domestic intelligence agency, he added.

Following a conference call with Germany's state interior ministers, Bavarian Interior Minister Joachim Herrmann said on the basis of the investigation so far, “it was a right-radical xenophobic” attack, dpa news agency reported.

The suspect expressed extreme right-wing views in a letter of confession he left behind, newspaper Bild reported Thursday. Bild identified the shooter as Tobias R.

In his letter he wrote about the "need to destroy certain peoples whose expulsion from Germany can no longer be achieved," the newspaper said. It added, without citing its source, that the man left a video claiming responsibility too.

German news agency dpa reported that police are examining a video the suspect may have posted online several days earlier in which he details a conspiracy theory about child abuse in the United States. The authenticity of the video couldn't immediately be verified.

In the video, the dark-haired speaker wearing a white button-down shirt under a suit jacket, said he was delivering a “personal message to all Americans” that “your country is under control of invisible secret societies.”

In a slow and deliberate voice, in accented English, he says there are “deep underground military bases” in which “they abuse, torture and kill little children.”

He makes no reference to the far-right fringe QAnon movement in the U.S., but the missive is similar to the movement's central, but baseless belief that U.S. President Donald Trump is waging a secret campaign against enemies in the “deep state” and a child sex trafficking ring run by satanic pedophiles and cannibals.

On a website registered by someone with the same name as the man in the video, Tobias R., the owner says he was born in Hanau in 1977 and grew up in the city, later training with a bank and completing a business degree in 2007.

The attack comes amid growing concerns about far-right violence in Germany, where people of immigrant background, especially Muslims and Turkish, are subject to frequent attacks and harassment of racist anti-Islamic nature. Despite strict monitoring stemming from the country's troubled past, anti-Semitic attacks also frequently occur. With the mass influx of refugees from Middle East, Africa and Asia in 2015, especially from Syria and Libya, xenophobic rhetoric has reached a peak in the country.

Halle was the site of The latest deadly far-right attack last year on the Jewish holiday of Yom Kippur. A heavily armed man expressing anti-Jewish views tried to shoot his way into a synagogue, failed and killed two passers-by before being arrested. He later admitted that he acted out of extremist and anti-Semitic motives.

The shooting in Halle came months after the killing of Walter Luebcke, the regional politician from Merkel's party. The suspect had a long history of neo-Nazi activity and convictions for violent crime.

In July 2016, an 18-year-old shot and killed nine at the Olympia shopping center in the Bavarian capital Munich before turning the gun on himself. Most of his victims were young people of Southern European origin. The motives behind the shootings by the assailant, who held German and Iranian citizenship, were apparently bullying, psychological problems and right-wing views.

Perhaps in the deadliest and most shocking incidents in latest years, the National Socialist Underground (NSU) terrorist cell was uncovered in 2011 following a bank robbery in Eisenach. Beate Zschaepe and her friends Uwe Boehnhardt and Uwe Mundlos were linked to 10 murders between 2000 and 2007, along with other crimes. Most of the dead were of Turkish or Greek origin. Mundlos and Boehnhardt shot themselves, and Zschaepe was handed a life sentence.

In July 2000, ten were injured and an unborn baby died in a bomb attack on migrants from Eastern Europe. The explosive device had been placed in a suburban railway station in the city. One suspect with contacts to right-wing extremists was acquitted of the crime in 2018 for lack of evidence. The culprit has still not been found.

Five women and girls from a Turkish extended family die in an arson attack and 14 others in the house were injured in Solingen in May 1993. Four men from the neo-Nazi scene in the city are found guilty of murder. The victims are remembered each year by the country's 3.5 million Turkish community,

Neo-Nazis firebombed a house inhabited by Turks in the northern city of Moelln in November 1992, resulting in the deaths of three women in the ensuing blaze. One of the culprits was handed a life sentence, while his youthful accomplice was sentenced to 10 years.

In February 1970, seven died in a nighttime attack on a home for the elderly of the Israelite Cultural Community. Burning fuel blocked their escape route. Those behind the attack on the Jewish residents have never been identified.

TURKEY: STAND FIRM AGAINST RACISM
European countries must stand together in firm opposition to xenophobia and racism, Turkey urged Thursday following the attack. "It is now time for all European countries to unite against racism and xenophobia and speak with one voice," the Foreign Ministry said in a statement.
"The heinous attack last night in Hanau, Germany is a grave new manifestation of rising racism and hostility to Islam," it added. Such racist attacks should not be considered as mere individual incidents, said the ministry, adding that the insensitivity shown in the fight against rising xenophobia in Europe is fueling new attacks.
"It is now time to put an end to these attacks. Otherwise, racism and xenophobia will reach more serious levels and lead us to a dangerous place," said the ministry. The ministry stated that the way to effectively fight racism, xenophobia and Islamophobia "lies first and foremost in avoiding this approach encouraging (prejudice) and taking effective measures against it."
Turkey is ready to show the necessary bilateral and international cooperation in the fight against all kinds of racism, and "we will continue our sincere efforts in this direction," said the statement.