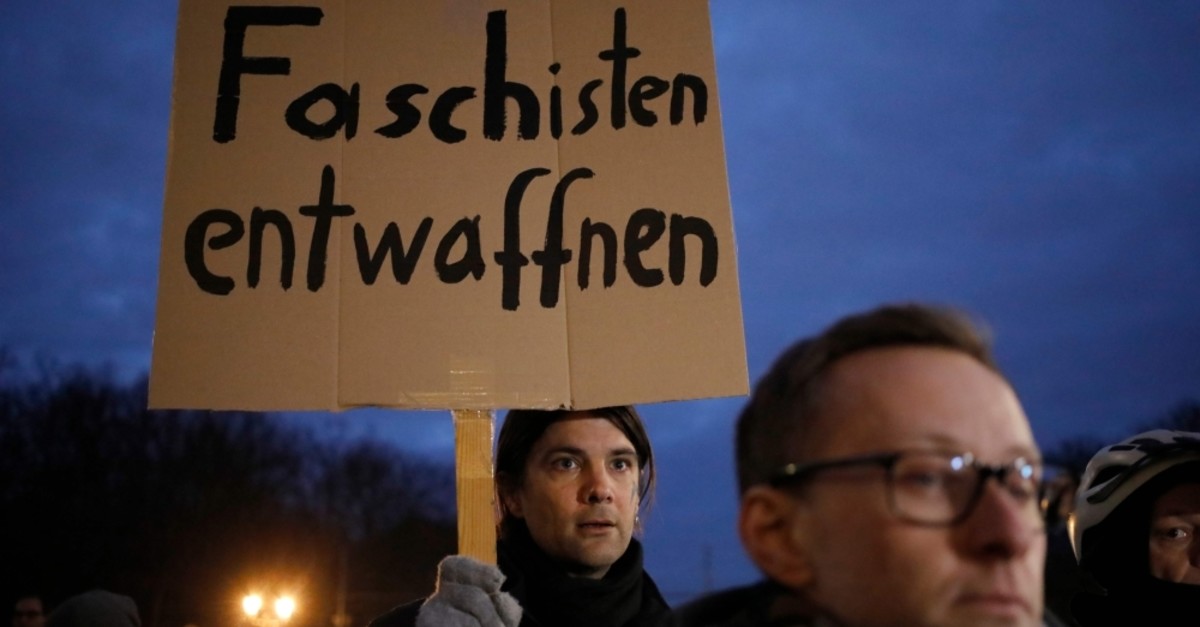 A man holds a poster reading ,Disarm fascists, during a vigil in solidarity with the victims and their families of the Hanau killings in front of the Brandenburg Gate in Berlin, Feb. 20, 2020. (AFP Photo)
by German Press Agency - DPA Feb 22, 2020 10:59 pm

A torch vigil of right-wing extremists planned for Sunday in southwestern Germany may take place, a court announced late Saturday.

The city has not set out any concrete threats to public security and it also did not recognize the potential dangers emanated from the registered meeting, the court ruled.

The court also rejected an immediate threat to public order.

According to the case-law of the Federal Constitutional Court, an immediate threat to public order requires special accompanying circumstances to a demonstration that have an intimidating effect or create a climate of violence and potential willingness to use violence.

The upper court's decision from Saturday is final.

A group from the extreme right regularly uses the anniversary of the main bombing of Pforzheim in World War II by Britain's Royal Air Force on Feb. 23, 1945, to gather with torches.

The city had banned the gathering on Friday after the racist attack in the western town of Hanau – which it said had changed the situation.

"Against the background of this risk assessment, it is unacceptable for right-wing extremists to gather in our city on Sunday," Pforzheim Mayor Peter Boch said.

On Wednesday, a 43-year-old German, Tobias Rathjen, shot to death nine people with immigrant backgrounds in the Frankfurt suburb of Hanau before apparently killing his mother and himself. Five of the victims were reported to be Turkish citizens. Rathjen left rambling texts and videos in which he espoused racist views, calling for genocide and claiming to have been under surveillance since birth.

Germany's top security official, Interior Minister Horst Seehofer, said security would increase across the country at mosques and other "sensitive sites" in the wake of the attack.

"The threat posed by far-right extremism, anti-Semitism and racism is very high in Germany," Seehofer said in Berlin.