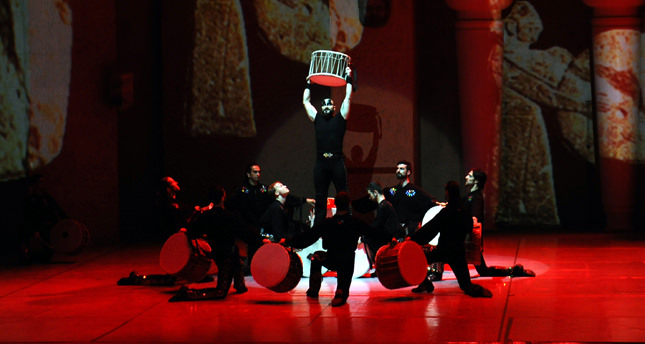 by daily sabah
Apr 25, 2014 12:00 am
ISTANBUL — After a two-hour performance, "Fire of Anatolia" received a standing ovation in Antalya for its season-opening performance under General Director Mustafa Erdogan.

The eye-catching performance was held at the Gloria Aspendos Arena and attracted almost 5,000 people, including foreign tourists.
Apart from their well-known dance routines, "Fire of Anatolia" made additions to a number of their dances. Erdogan said, "We tried a new strategy called 'flight system' that we brought from the U.S. There were very thrilling scenes toward the closing.

Our audience watched an enthusiastic show. We are planning to perform 85 more shows this year. There are upcoming performances in Antalya."

Synthesizing Turkish folkdance figures with ballet and modern dance and music from different regions of Anatolia, "Fire of Anatolia" is a unique project reflecting Anatolia's ancient myths, folklore and cultural history. Erdogan back in 1999 started working on the project intensively to make his lifetime dream come true. The project, originally called "Sultans of the Dance," involved 90 dancers selected out of 750 candidates.

Dancers were given special training, including stretching and yoga and worked under the very strict supervision of dieticians, estheticians and massage specialists. They also took theoretical instructions on the notation of Anatolian rhythms. The group started touring the world in 2002 and reached out to thousands of dance lovers in many countries including Albania, Algeria, Austria, Azerbaijan, Belarus, Bahrain, Belgium, Bosnia & Herzegovina, Bulgaria, China, Croatia, the Czech Republic, Denmark, Egypt, France, Germany, Greece, Georgia, Hungary, Israel, Italy, Japan, Jordan, Kazakhistan, Latvia, Lebanon, Macedonia, Malaysia, Mexico, the Netherlands, Palestine, Poland, Portugal, Qatar, Romania, Russia, Serbia, Siberia, Slovakia, Slovenia, Spain, Sweden, Switzerland, Syria, Tunusia, Ukraine, the United Arab Emirates and the U.S. "Fire of Anatolia" is regarded as one of the best dance groups of the world and hopes to introduce global audiences to the fire that rises from ancient Anatolia, the land that combines history, culture, peace and love with countless performances at great venues.