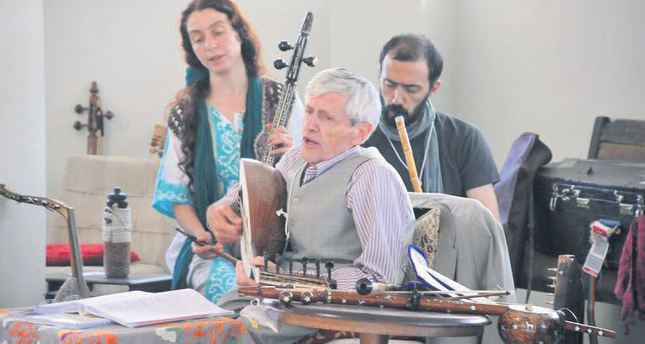 by Daily Sabah May 19, 2014 12:00 am
The Traditional Turkish Music Research and Promotion Society (TÜMATA) is putting on the event "99 Days 99 Nights Sema," at the Rasim Mutlu Culture Center in the district of Termal, Yalova.

The event kicked off on May 16 and will continue until Aug. 18, welcoming participants from many countries such as the U.S., England, Germany, Austria, Italy, Belgium, Spain, Iran, Israel and Bulgaria. To experience a unique spiritual awakening, the audience can join the Sema, a ritual dance of whirling dervishes, at their own pace, accompanied by eulogies and qasidas, poems praising the Prophet Muhammad. Speaking during a press meeting, TÜMATA Founder and Associate Professor Rahmi Oruç Güvenç said "Ariflerin Menkıbeleri" (Legends of the Wisemen) by Ahmed Eflaki offers detailed accounts on how often and how long Mevlana practiced the Sema. "Mevlana was said to have performed it, sometimes continuously for three days and nights, sometimes seven days and nights, sometimes 16 days and nights, and three times for 40 days and nights," said Oruç. The first of TÜMATA's Sema events was held in Switzerland 14 years ago. At least two whirling dervishes were continuously performing throughout the event. "The music never stopped, only the musicians changed. It was ended with great success," he added.

The organization has held Sema events in Sweden, Germany, Austria, Spain and Turkey since then. Recently, a group of participants from 63 countries practiced Sema for 66 days and nights. This is because the name "Allah" by itself has the value 66 according to the Abjad numeral system, in which the 28 letters of the Arabic alphabet are assigned numerical values. Afterward, the participants counted 33 Islamic prayer beads to reach the number 99, the total number of names by which God is referred to in Islam.

There are currently 90 people taking part in the event in Termal. The national flags of foreign participants have been hung on the walls to demonstrate the universal values of Mevlana. "Israeli and Arab people are whirling and praying side-by-side here. This is what humanity longs for," he highlighted. On account of the fact that tourists can only obtain a threemonth residence permit in Turkey, some participants will be coming a few weeks later to attend the final performance.

More participants are expected to attend later in the festival due to the upcoming summer holiday. TÜMATA is looking forward to hosting more than 400 people.
Last Update: May 19, 2014 2:05 am
RELATED TOPICS