You are kindly invited to Festival in Iftar! 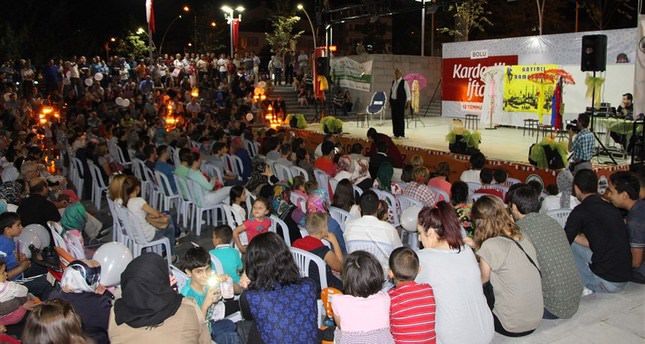 by Daily Sabah Jul 18, 2014 12:00 am
Theater Play "İftarda şenlik var!" (Festival at Iftar) will be performed at the İzmir Bostanlı Suat Taşer Open Air Stage on July 21. Ahmet Çevik Theater artists are here with a program that will spice up Ramadan evenings. Sponsored by Yeditepe Organization, "İftarda Şenlik Var!" will be an unforgettable evening for the audience.

The play opens with a live piano performance by Aras Deniz Sipahi and Ahmet Çevik, Ortans Kıvanç, Şehnaz Dilan, Esin Gündoğdu, Ender Gülçiçek and Sümer Tilmaç's manis (short Turkish poem in quatrain) to salute the audience. The opening is followed by Sümer Tilmaç and Ahment Çevik's quarrel with manis and Şehnaz Dilan's canto. "We will bring to you the Ramadans that you have been longing for with Pişekar, Kavuklu, Arap Bacı (characters from Turkish folklore), cantos and theatre companies. By performing the old theater companies of Ramadan to the new generation, we will show how much everything has degenerated today.

For example, there used to be a meaning and respect for family privacy and marriage. There were no fighting spouses on the streets let alone family fights in homes. Through the current television shows, everything has been normalized for people. Moreover, people have started to get on television shows and tell everyone about their private family matters. In short, we try to tell that we are longing not only for the old Ramadans but also for the times when Turkish culture had still importance and value in our play. We aim to show everyone that we should protect our values through an entertaining language," the group declares.