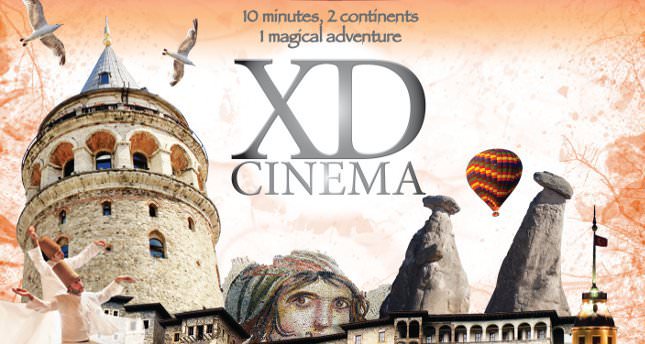 by Daily Sabah Aug 18, 2014 12:00 am
"Dream of Turkey" is a 3-D film that is transferred into a simulator. The film is an exciting journey that offers the wonders of Turkey with the best possible sense of reality and supports this visually with sound effects. This multi-dimensional film is shown with moving seats. In the cinevision system, the seats are synchronized with the images and the five senses of the audience members stimulated in parallel with the action.
The system creates a virtual sense of reality with effects like rain, snow, fog, wind, smoke, scents and foam.

Animating history, natural wonders, religious motifs, outdoor sports and mythological stories, the film captures the audience. While watching the city from above, the audience suddenly enters through a window, travels under the sea and feels the wind as well as the water. The unique beauty of the Bosporus, the gladiator fights of ancient Ephesus, the incredible white of Pamukkale, the mystic brown of Cappadocia, the turquoise of the Mediterranean, the red sunset of Mount Nemrut, the divine love of whirling dervishes, the Requiem of Belkıs in Aspendos and the colorful world of flamingos are some of the scenes in "Dream of Turkey".