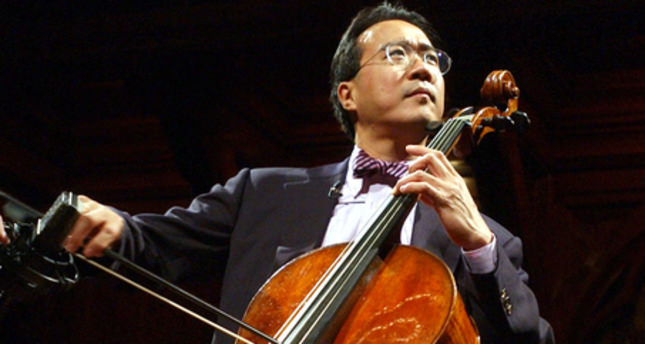 by Daily Sabah Aug 21, 2014 12:00 am
French-born American cellist Yo-Yo Ma will take the stage with his orchestra, The Silk Road Ensemble, which promotes artistic exchange along the Silk Road, on Sept. 4 in Istanbul. Born to Chinese parents, Yo-Yo Ma started to play cello at the age of five. Known for his prodigal skills, he performed for late U.S. presidents Dwight D. Eisenhower and John F. Kennedy when he was seven. The talented cellist appeared on American televisions in a concert at age eight. He attended the Professional Children's School from which he graduated at the age of 15.

The acclaimed cellist appeared as a soloist with the Harvard Radcliffe Orchestra and has won 17 Grammys and released 75 albums during his career. In 2009, U.S. President Barack Obama appointed him to serve on the President's Committee on the Arts and Humanities. Yo-Yo Ma has received a number of awards, including the Avery Fisher Prize (1978), Glenn Gould Prize (1999), National Medal of the Arts (2001), Dan David Prize (2006) and Sonning Prize (2007). Ma was named Peace Ambassador by then-U.N. Secretary-General Kofi Annan in 2006 and was presented with a Presidential Medal of Freedom, the most prestigious award in the U.S., by Obama in 2010. Ma will perform the world premiere of his latest composition at the Zorlu Center PSM Main Theater.

Founded back in 1998, the Silk Road Ensemble harmonizes Asian and European cultures under the artistic direction of Yo-Yo Ma. The famous orchestra draws together distinguished performers and composers from more than 20 countries in Asia, Europe and the U.S.The innovative artists explore contemporary musical crossroads, developing a new repertoire that reflects the world's cultural diversity. This special evening will feature the renowned composer and Persian kemenche virtuoso Kayhan Kalhor, who will present the world premiere of his latest composition "Layers of Loneliness." Born to a Kurdish family, Kalhor is a master of Persian and Kurdish music. Aynur Doğan, the leading name in Kurdish folk music, will also perform as a guest.