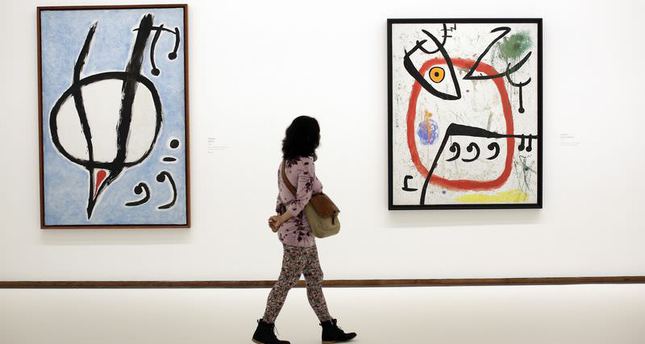 by AA Sep 23, 2014 12:00 am
A three-year struggle to bring artworks by one of Europe's most extraordinary talents to Istanbul has been successful, with a new exhibition of Catalan artist Joan Miro being unveiled this week.

Around 125 works by Miro will be exhibited at Sakip Sabancı Museum until 1 February 2015.

The exhibition titled J'oan Miro: Women, Birds and Stars' focuses on the artist's mature period and is partly organized by Joan Miro Foundation in Barcelona.

Creations including oil and acrylic paintings, lithographs, etchings and assemblages with relevant models and drawings as well as his textiles and ceramic works will be exhibited.

Speaking at a press conference at Sabancı Museum, director Nazan Olcer said that preparation for the exhibition took three years.

"Our dream was to add the third link with this great Catalan master to the trilogy of Spain's great masters," Olcer said, referring to the museum's earlier exhibitions of Pablo Picasso and Salvador Dali.

"Some of his art in different techniques and some of his personal belongings will be exhibited for the first time in Turkey," she added.

"A series of documentaries will also be shown at the exhibition thus giving us the chance to observe the artist's life, inner world, his transformations, friends, anger and reaction to the political events in his country and in the world," she said.

Miro's grandson Joan Punyet Miro was also at the launch. Speaking to the Turkish press agency AA, Punyet Miro said that one of the objects displayed at the exhibition had a special meaning for him as it reminded him of his childhood.

Posing along with a water tap he said: "When I was a child I was using the water tap to fill a tank where I was swimming in Catalonia. One day the water tank disappeared and it was used in one of his sculptures."

Punyet Miro described the exhibition as "complete" as there are paintings, drawings, sculptures and tapestries.

Rosa Maria Malet, director of the Joan Miro Foundation, said that Miro defined himself as 'painter' but a painter who tries to work with all kind of material that he finds. "He was a big explorer and a big teacher; Miro tried to explore new techniques," Malet said.

Both an artist and sculptor, Miro was born in 1893 in Barcelona. He died in Mallorca in 1983. His works have been closely associated with the Surrealism movement, manifesting his subconscious mind and Catalan pride.