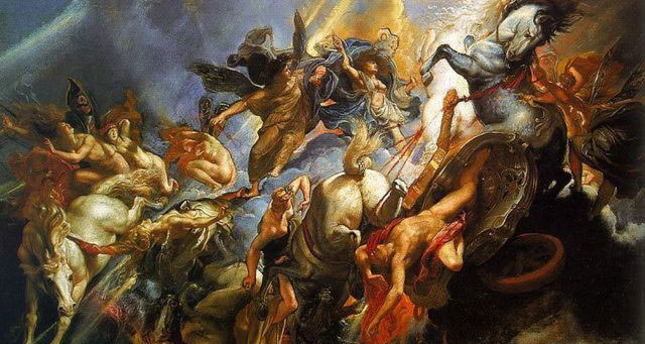 by Daily Sabah Sep 27, 2014 12:00 am
Key issues in ancient Greek mythology including the creation of the universe, the lineage of the Pantheon, the generation of Zeus, the titans, the generation of Heros (Perseus, Theseus, Heracles) and Homer's epics "The Iliad" and "The Odyssey" will be discussed during the seminars from Oct. 9-17. Furthermore, the seminars will explain the influence Greek mythology had on ancient and modern mediums of art such as paintings, sculptures, architecture, photos and cinema. The seminar will also cover how mythological topics became the subjects of Greek and Roman art starting with Greek vase artwork and their effect on paintings and sculptures from the Renaissance and Baroque eras to 20th century art. The seminar will also clarify how mythology is reproduced in the art of cinema from the invention of motion picture to the present day through a comprehensive reading accompanied by images and film trailers. The events are free of charge.

The origins of art and mythology and its psychological and socio-cultural effect, especially of Greek and Roman art until the end of the Classical Age, on contemporary visual culture and Renaissance and Baroque art will also be covered.

Introduction to Greek mythology, the creation of the universe, the lineage of the Pantheon, the generation of Zeus including the titans and the power struggle as well as the descriptions of these identities, their representative symbols, works and actions will be the topics of this session.

The creation of mankind, Hesiod's history of the gods and humans (golden age, silver age, bronze age etcetera), the tale of Prometheus, the story of Pandora, the metamorphoses and lineages of heroes (Perseus, Theseus and Hercules) will be also discussed in this session.