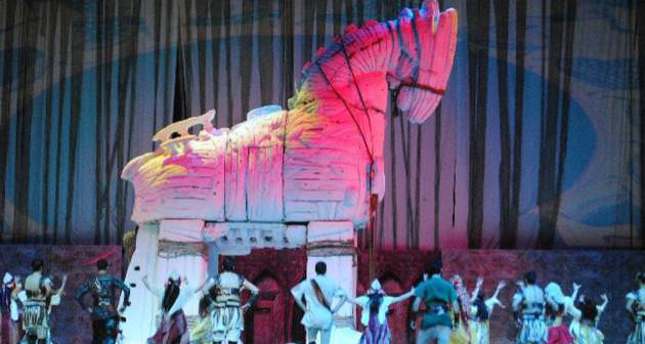 by AA Oct 22, 2014 12:00 am
The legend of Troy, which is believed to have taken place in 1180 B.C., will continue its journey on the stage with a tour of Anatolia. Mentioned by Homer in his epics "Iliad" and "Odyssey," "Troy" is one of the oldest and most well known stories of humankind, which erases the borders between dream and reality, science and utopia. The dance group, Fire of Anatolia, will stage the legend-inspired performance in Trabzon on Oct. 30 before embarking on a tour around Turkey. Fire of Anatolia Art director, Mustafa Erdoğan, in his statement to Anadolu Agency (AA), said the dance group is seen as a "national team" in its own field in Turkey and said that Fire of Anatolia has broken all the country's existing performance art records. He claimed that the project satisfies Turkish peoples' need for their own culture, as well as putting Turkish culture in the spotlight in countries around the world. So far, the performances of the dance group have been watched by 37 million people around the world and have performed in nearly 280 cities in 96 countries. Fire of Anatolia tours China, Russia and Europe every year, and this season, they will tour the Netherlands for two months, where the group will give performances in some of the country's biggest venues. Erdoğan said that Fire of Anatolia has helped make up for the lack of success Turkey has had in the performing arts, emphasizing that Turks living abroad are proud to see them on stages around the world.

Fire of Anatolia performed "Troy" six years ago for the first time and they will perform the show once again with new choreography. Performed mostly abroad and in the Turkish province of Antalya, the performance has evolved thanks to the six years of experience gained by the dance group. "We renewed the costumes and added a few more dances," Erdoğan said, adding that some of the dances featured in the show have been accelerated making the performance more dynamic and faster. Although "Troy" has gained attention around the world, it has rarely been staged in Turkey, due to a lack of suitable venues for the show. "Istanbul especially used to lack these kinds of stages," Erdoğan said. With its new adjustments, "Troy" will be staged throughout Anatolia. The dance group's Anatolian tour will commence with its performance in Trabzon at the end of the month.

"The Black Sea region's stage is the most magnificent and acclaimed stage in Anatolia," Erdoğan said, adding that Trabzon has a special place for him even though he loves every part of Turkey. He continued, "The audience of Trabzon is wild and they love us. We went there as a part of the Fire of Anatolian tour last year, but we will perform "Troy" for the first time. We owe so much to Trabzon, which is why we chose to start our tour there." The dance group will perform in various cities around Anatolia including cities in which they have never performed before. The group will hit the road with 150 people, 95 of which are dancers, and five trucks. With next year being the 100th year anniversary of the Battle of Gallipoli, Erdoğan says the troupe is now working on a project combining "Troy" with The Battle of Gallipoli. "2015 will be the year of Troy and Çanakkale (Gallipoli) for us. We will perform the renewed 'Troy,' but we are also working on new choreography that we will illustrate the stories of Troy and the Battle of Gallipoli together," he said. Erdoğan emphasized that "Troy" and the Battle of Gallipoli, which took place during World War I, have much in common. The show will be performed in Çanakkale as well as five cities in Australia. The dancers in the group rehearsed 7,200 hours for Troy and 12,000 meters of fabric were used for the Trojan Horse and costumes. "Troy," named after the city that was embellished by world leaders throughout the ages including Hittite King Tuthalia, Persian King Xerces I, Alexander the Great, Julius Caesar of Rome, Constantine of the Byzantine Empire, Sultan Mehmet the Conqueror and Mustafa Kemal Atatürk, will be performed at Samsun, Ankara, Gaziantep, Mersin, Istanbul and İzmir following Trabzon.