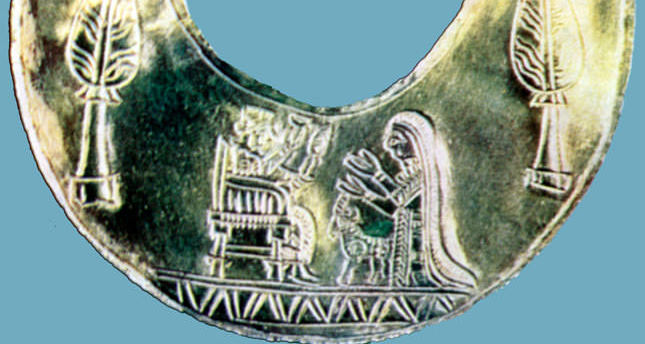 by Daily Sabah Oct 28, 2014 12:00 am
An Urartian period jewelry exhibition displaying 1,100 recently-restored pieces of jewelry opened Thursday at the established art and culture center, Rezan Has Museum in Istanbul. Urartu was an Iron Age civilization that reigned in eastern Anatolia in the mid-ninth century B.C. for 250 years. The show, which is one of the most comprehensive Urartu exhibitions in the world, showcases a broad variety of jewelry such as rings, earrings, bracelets, belts, collars and armbands. "We are very happy to share with you our Urartian jewelry collection," Ahu Has, advisory board president of the museum said: "Our greatest duty is to protect and hand down this jewelry collection to the next generation." Urartians used jewelry widely in their daily life and engraved jewelry, especially metal belts, for personal protection against evil. "Lion, bull, eagle and snake are the main figures depicted on Urartian jewelry. They used them as symbols of power," explained Associate Professor Rafet Cavuşoğlu, the head of Archaeology Department at Yüzüncü Yıl University in Turkey's eastern Van province. The majority of the pieces at the exhibition were removed from mausoleums in eastern Anatolia at different periods and have been restored for the exhibition. The preparation of the collection for the exhibition took one year. "Many of the belts in particular were broken when they were removed. We think Urartians broke them on purpose to prevent them from being reused," Çavuşoğlu said. The ancient exhibition, which gives visitors a chance to see ancient Urartian art up close is on show until July 31, 2015.

Where: Rezan Has Museum