Fire of Anatolia to be lit in Istanbul 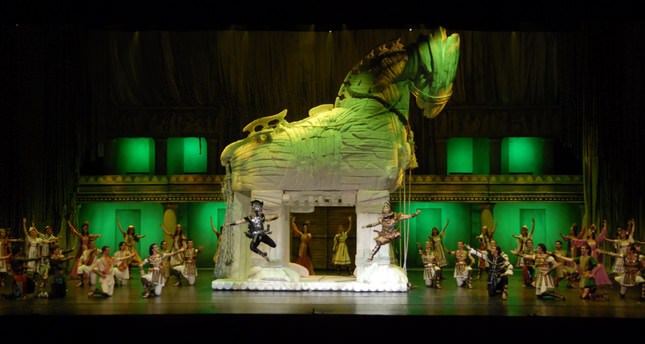 by AA
Nov 15, 2014 12:00 am
Fire of Anatolia, which continues its Anatolian Tour, will perform "Troy" on Nov. 21 at Ülker Arena in Istanbul, according to a statement released by the group. So far, performances by the dance group have been watched by 45 million people around the world in nearly 280 cities in 96 countries. The legend of Troy, which is believed to have taken place in 1180 B.C., was written by Homer in his immortal works "The Iliad" and "The Odyssey." Until this season, Fire of Anatolia presented their performance based on the legend mostly abroad and in Antalya for six years.

Fire of Anatolia General Art Director Mustafa Erdoğan said several parts of "Troy" have evolved thanks to the six years of experience. He stated that they are stronger in the musical sense and added, "According to me, 'Troy' is the richest art work in terms of music.

Contributing to "Troy" this season are 80 violinists and a vocalist from the Prague Philharmonic Orchestra, the local sounds of Kardeş Türküler, well-known virtuosos of Turkey and world-renowned artists Vassilis Saleas, Gheorghe Zamfir and Jivan Gasparyan. "We have made new collages from their works, and they are magnificent," Erdoğan said. Even though the dance group has been performing the show for six years, new choreographies, dances and costumes have been included for the group's Anatolian Tour. Erdoğan added, "In particular, we use new martial art techniques for the war scenes." "Troy" mostly focuses on female dance, as the performance and the legend is a woman's tale. The new edition of the performance also has new scenes to highlight this feature of the story.