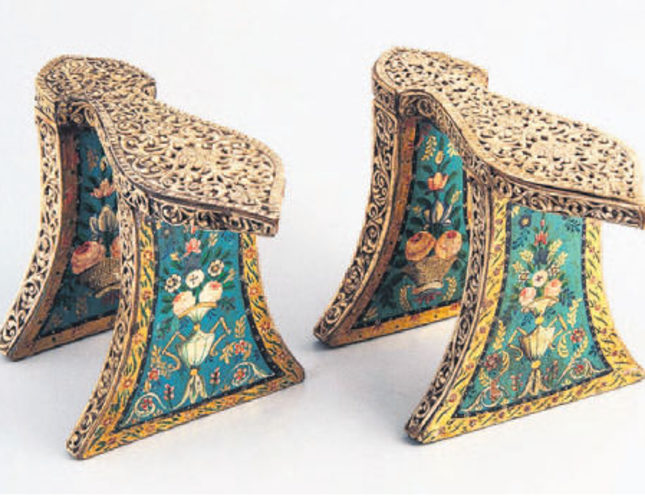 by daily sabah
Nov 24, 2014 12:00 am
The Sadberk Hanım Museum will open its doors to a gorgeous exhibition featuring a collection of Ottoman women's shoes dating from the 19th and early 20th centuries from Nov. 27, 2014 to May 31, 2015 in Istanbul. The thematic exhibition, "Pabuç, Sadberk Hanım Müzesi Koleksiyonundan" (Shoes from the Sadberk Hanım Museum Collection), contains 127 examples of footwear mainly worn by Ottoman women with a limited number of pairs made in Central Asia, India, North America, Iran and European countries. Visitors will see late Ottoman shoes and slippers along with other embroidered footwear from the early years of the Turkish Republic. Aside from the traditional Ottoman style, the extensive collection represents boots, shoes, clogs and slippers with the influence of European fashion. A large portion of leather and fabric shoes are embroidered with various decorations such as silk thread, beads, sequins and other similar materials. Some examples of footwear are decorated with gold thread or metal wrapped thread and wire.

Ottoman-style clogs - "nalın" in Turkish - will presumably be the heart of the collection. Carved from wood, they were once an indispensable daily garment for Ottoman women. Clogs were worn during bathing ceremonies and rituals and were crafted with high heels to protect feet from dirty water on the ground. Interestingly, the different heights of clogs represented the socio-economic hierarchy in society. The upcoming exhibition will display a selection of traditional clogs adorned with silver, ivory and mother-of-pearl, all of which were the most common embroidery materials in the Ottoman Era. Visitors can learn about late Ottoman shoemakers and retailers while reading the information on certain labeled shoes. They will take a journey to older times with the bridal shoes of Princess Atiye Hilmi Hanım, a member of a royal Egyptian family, and the children's boots of Memduha Hanım, who was the daughter of Ottoman statesman Ahmet Münir Pasha and his wife Pervin Hanım.

Born into a reputable family in 1908, Sadberk Koç had a special interest in Ottoman attire and accessories. Recognized as Turkey's first private museum, the Sadberk Hanım Museum was founded by the Vehbi Koç Foundation in 1980. The museum's inventory has reached more than 18,000 items including a rich collection of late Ottoman era women's wear, silk fabrics, calligraphy, İznik tiles and ceramics and various Islamic, Far Eastern, Near Eastern and European artifacts. All pieces belonged to Sadberk Hanım's private collection. The temporary exhibition will be open to visitors from 10:00 a.m. to 5:00 p.m. every day except Wednesdays.
Last Update: Dec 27, 2014 3:27 pm