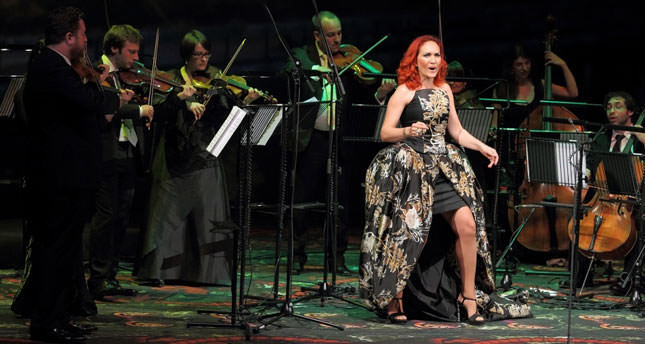 by Daily Sabah Dec 05, 2014 12:00 am
German coloratura soprano Simone Kermes will share the stage with Concerto Köln, one of Europe's oldest music ensembles at the Cemal Reşit Rey Concert Hall (CRR) next week. These two prestigious names will perform well-known arias and overtures by Handel and Vivaldi. As well as playing the best melodies of baroque music, Grammy-winner Concerto Köln will perform concerto grossos by Evaristo Felice Dall'Abaco and Francesco Saverio Geminiani. Simone Kermes is known as one of the most in-demand dramatic coloratura sopranos, who interprets baroque music beautifully. Aside from sopranos, she performs virtuosos by Handel and Vivaldi, and Mozart's concerto arias in her own unique style. Kermes was awarded the title of "Best Female Singer" in 2011 by Echo Klassik. She has taken to the stage with global stars such as Daniel Harding, Emmanuelle Haim and Max Emanuel Cencic, and attracts large audiences around the world. Kermes has collaborated with prestigious orchestras such as the Leipzig Gewandhaus and Staatskapelle Dresden. In 2006 and 2007, she received numerous international awards with her album "Griselda" featuring the works of Vivaldi.

When: Dec. 9
Where: CRR Concert Hall