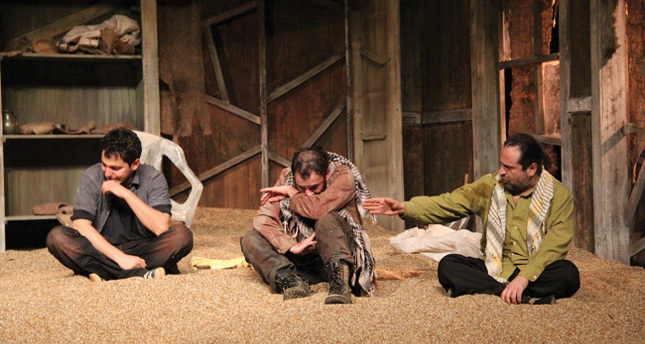 by AA Dec 17, 2014 12:00 am
Prior to the recent performance of the play "Masked" that was held in Ankara, the IDs of audience members were checked to draw attention to the sufferings of Palestinians under the Israeli occupation. Written by Jewish author Ilan Hatsor in 1990, the play is an intense drama about three Palestinian brothers during the First Intifada.

Mehmet Tahir İkiler, both the general artistic manager of Başkent Theaters and the play's director, spoke to Anadolu Agency and said that the drama notably attracts a young audience. The single-act play departs from the conflict between the brothers who bear different perspectives on the war. "While witnessing their internal conflicts, viewers understand that the war in Palestine is intentionally taking place. If you compare the situation now with the early days of the war, you can see Palestinians still endure the same sufferings," İkiler said, and reminded that Israeli police limited access to Al-Aqsa mosque for women and Muslim men between the ages of 40 and 50. He added that the playwright sends a clear message to Palestinians, which is that "you fell into the trap of the Israelis and consider anything from them a blessing, but the soil belongs to you."

Although the play was performed in Turkey before, İkiler wanted to attract interest with experiential activities before the performance so that the audience can feel the violence inflicted by Israeli soldiers to a limited extent first-hand. "We check IDs before the audience enters the hall. When I visited Al-Aqsa, soldiers checked my ID at least four times. They asked me whether I am Muslim, but none of them asked me anything when I visited the Western Wall or the Church of the Holy Sepulcher," İkiler said.

Audience members react differently to the ID checking. İkiler said that one viewer tore up his ticket and left the hall while he was waiting. "My assistant told him that this is what we are trying to demonstrate. Palestinians are unable to respond to the frustrations and pain caused by the occupation by going home. The audience can feel Israel's despotism," İkiler emphasized. Actors also continue despotic behaviors on stage and directly tell audience members to stop talking.

Nebil Tarhan translated Hatsor's play into Turkish, Kemal Günüç composed the music and costume and stage design was done by Sinem Özdemir, Zeki Gürgen and Volkan Soylu. The drama has won many international awards and its cast features Kadir Çöklü, Serkan Yaşar, Serkan Kaya, Şahset Berber, Hasan Erten, Burak Hatipoğlu, Mehtap Maman and Banu Dilmen. As of January, the play will be on stage until the end of the theater season, and İkiler invites all to experience the play. "Come and see my play. You will feel the oppression in every second," İkiler concluded.