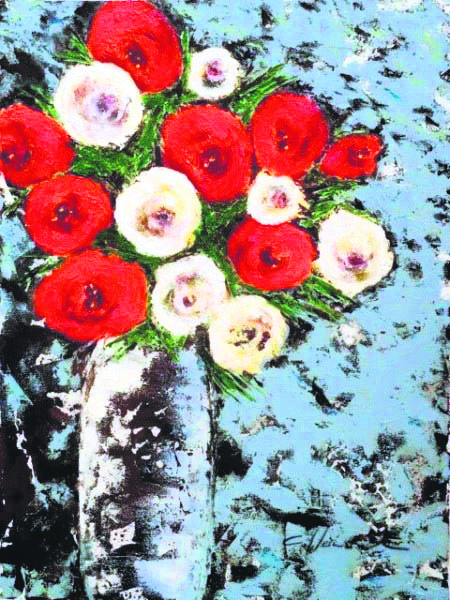 by Daily Sabah Mar 05, 2015 12:00 am
In recent times, there have been efforts to neutralize art and artists. It is in such an environment that Galeri Eksen in Istanbul opens its doors to an exhibition with the theme of "Kırmızı" (Red). The artists taking part in the exhibition seek to liven themselves up with the dynamic color of red - to shake themselves out of a state of slothfulness and stagnant thinking. While bringing their individual creativity to the forefront, they adopt an opposing position with a critical approach. They say painting covers more than merely a canvas. The exhibition departs from the fact that art exists by rebelling against taboos. Being well aware of the fine line between "coming into existence" and "existence" itself, the artists display their own existence without fear by painting their works in red. Reflecting their own visions, they draw attention to global problems through color. Red generally symbolizes power. When it is applied to canvas, art turns into power as well. And if these two powers come together, they roll over anything in their path. The exhibition aims to show the transformative power of art and artists to those who disregard and disrespect them. The theme "red" is used as a stimulus to call out to people who do not want to wake up. The artists are confident that the color red by itself will start an uproar. They argue that art does not exist merely to entertain people, but instead urge viewers to face reality. To illustrate, coal is associated with fire and heat - fire also evokes the concept of red in the mind - the recent tragic mining accidents in Turkey are recalled in red by the artists. The struggle for petroleum is the next issue that is reflected on canvas. Many people have been the victims of this black liquid, the artists point out. The displayed paintings also criticize the red lines in international relations. For the artists, the limits of the red lines are settled by national powers and there is innocent people's blood on them.

When: Until March 16
Where: Galeri Eksen
RELATED TOPICS