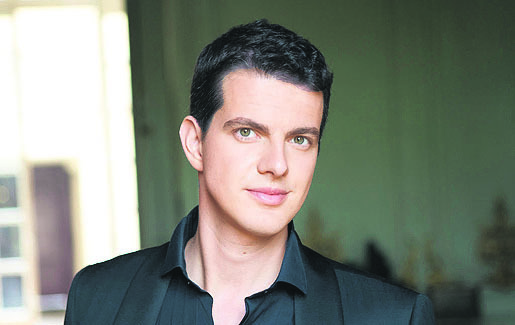 by Daily Sabah May 14, 2015 12:00 am
French countertenor Philippe Jaroussky will perform opera arias of the legendary composer George Frideric Handel during his Istanbul concert at Cemal Reşit Rey Concert Hall on Saturday. Jaroussky will be accompanied by the baroque orchestra Orfeo 55 under the baton of Nathalie Stutzmann, according to the statement by the Istanbul Metropolitan Municipality's General Directorate of Culture and Social Affairs. Jaroussky will perform "Teseo" and "Deidamia," Handel's last Italian opera, "Parnasso in Festa," composed for the wedding ceremony of English Princess Anne and Prince William III of Orange, and the dramatic cantata "Aci, Galatea e Poliferno." Jaroussky became famous after he delivered successful performances at festivals in France in 1999, and in 2007, he won the Best Lyrical Artist award in France. Jaroussky also received the Year's Best Singer award at the Echo Klassik 2012 award ceremony at Konzerthaus Berlin. He will enliven the Istanbul stage with a virtuosic coloratura technique.