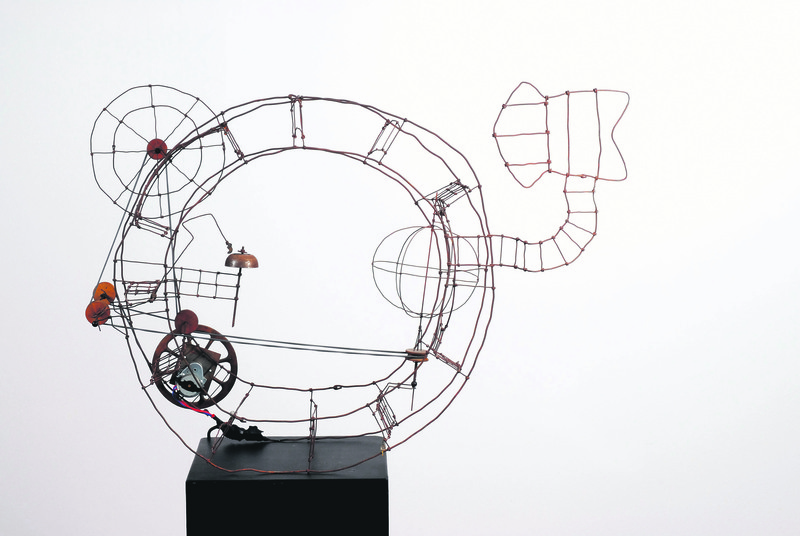 Have you seen the massive yellow line that pierces the front façade of the Arter gallery's building on İstiklal Avenue? It offers an excellent introduction to Arter's new "Spaceliner" exhibition, which continues until Aug 2. The yellow line, a sculpture by Hans Peter Kuhn, is titled "cut along the dotted line." Both striking and understated, it shows the impact a line, a single yellow line, can have on the viewer.

"Spaceliner" is a great summer show. It makes you want to go home and draw. Curated by Barbara Heinrich, the exhibition features works by Peter Anders, Sandra Boeschenstein, Pip Culbert, I·nci Eviner, Monika Grzymala, Nic Hess, Go¨zde I·lkin, Harry Kramer, Pauline Kraneis, Hans Peter Kuhn, Zilla Leutenegger, Pia Linz, Christiane Lo¨hr, Ulrike Mohr, Jong Oh, Nadja Scho¨llhammer and Heike Weber. For Heinrich, the starting point of the exhibition was a single question. What happens when one of the fundamental elements of drawing, the line, detaches itself from the material support of the sheet and enters into space? She explained that the title is a kind of wordplay with the exhibition's two central topics, the line and space.

Heinrich describes Kuhn's dotted line as an introduction to the exhibition's concept. "When drawing spreads out into actual space, the lines create volume, the drawing becomes three-dimensional, which makes it possible to perceive what is there from different perspectives and visual angles. With spatial drawings, they become transmuted into process and the aspect of movement gains central significance. The subject-object relationship radically changes, since now the observer moves within the work - always still perceiving it as a counterpart, while simultaneously being a part of it."

"Spaceliner" features some works so fragile that you may be excused for not quite knowing how to approach them. Materials used in works include horsehair, charcoaled wood and clotheslines. Jong Oh's work particularly impressed me with its fragile, delicate structure. It also worried me - I wonder how people will interact with it.

"Jong Oh creates filigreed lines at the verge of visibility and the structural elements are fine and precisely balanced with each other," Heinrich explained

"It is stunning how he creates open and closed geometric forms with minimal means. In this respect, the work will surely be a surprise. The outlined surfaces constitute an absence that is present, a form in self-repose, an imaginary sculptural presence that the observer has to 'draw in'. One can immediately feel the work´s fragility while entering the space, and this fragility at the same time makes you move carefully and be aware. I am sure that visitors will treat the work with respect."

Another work I found interesting was Pia Linz's "Gehausegravuren" (Enclosure Engravings). For this series, the artist has built temporary constructions of Plexiglas in private and public spaces including her studio, a pizzeria, a shopping center and the Berlin television tower. Sitting inside these specially-constructed "forms" Linz drew all that she saw around her - a process that often took weeks - in a 360 degrees perspective on the inside of the Plexiglas windows with the fine lines of a felt-tip pen.

"As soon as her graphic process is completed, the lines are fixed in black engraving and the transparent enclosure is sealed," Heinrich explained. "And so Linz instigates a vexing game: during the drawing, the artist's gaze moves from inside to outside, whereby the outside is transformed into an inside. Yet for the observer, entry into the inside of this panorama is denied, his or her gaze can only fall from the outside on that which the artist had seen from within. Beyond that, at least two surfaces of the work are always perceptible, that's to say, two overlapping layers of drawings simultaneously and, through the enclosure's transparency, the surrounding space as well."

Those works which so strongly focus on the line and the drawing come as a breath of fresh air in today's super high-tech modern art scene. I asked Heinrich whether her interest in those fundamental components of visual arts reflects her take on the current state of arts.

"It is interesting that you see these works as a breath of fresh air because this implies that drawing is usually understood as a somewhat traditional or even an old-fashioned medium," Heinrich said.

"Since the 1960s the idea of drawing has expanded. Drawing entered into crossovers with other genres and mediums. Since then it developed various affinities with installation and sculpture, with video, film and photography, as well as with environmental art. And the options in artistic materials and media have also expanded tremendously. Drawings are created using needle and thread, masking tape and wire, clotheslines, horsehair and charcoaled wood; by folding and by cutting, by light. ... Drawing is a contemporary means of expression and has the potential to push ahead the development of new visual ideas by means of extraordinary methods and materials."

Some works in the show, including Ulrike Mohr's "Anthrakothek," made of cherry wood charcoal, lilac charcoal, maple charcoal, hazel charcoal, willow charcoal, ivy charcoal, strips of wood, nylon thread and carbonized bush, have a local aspect as their materials were collected from, or processed in Turkey.

"Some of the works here relate to the local, but more important are the subjects that the artists in the show address in their works," Heinrich said. Social relations, private and public, stability and instability, the manifold spatial and temporal dimensions that make up our perception, the process of the construction of identity, subjective and collective realms of memory and the function of images, the tension between individuality and conformity, are among the themes explored in the show.

"In conceiving this exhibition I was very much interested in the transmutation of drawing into a process and the aspect of movement as a linking element between line and space," Heinrich said.
Last Update: May 15, 2015 10:06 pm
RELATED TOPICS