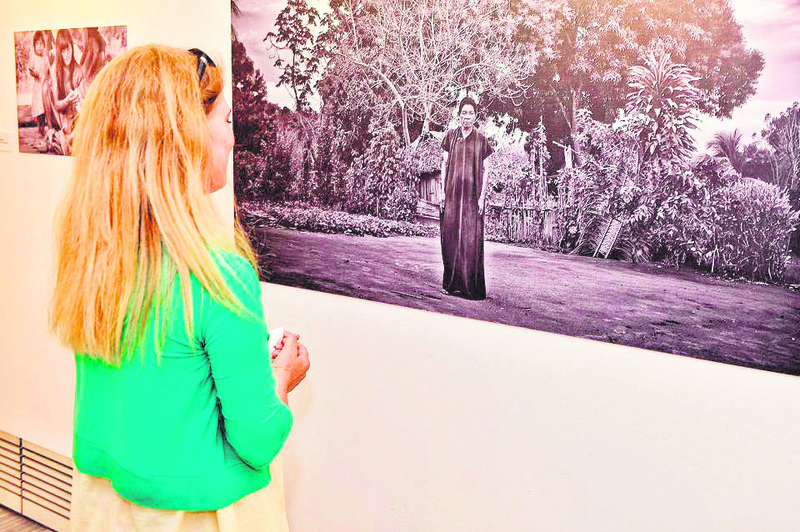 by Daily Sabah Jun 12, 2015 12:00 am
Displaying the work of Peru's top 18 photographers, the photo exhibition "Peru Amazonları" (Peruvian Amazons) opened this week as part of the Beyoğlu Municipality's sixth annual Intercultural Art Dialogues program at the Beyoğlu Municipal Art Gallery. It will run until June 20. Organized in collaboration with the Embassy of Peru in Ankara, the Istanbul Cervantes Institute and the Beyoğlu Municipality, the exhibition introduces the Peruvian Amazon's anthropological and environmental richness as well as its rare mix of modern and traditional lifestyles. All photos witness a deep and coherent relationship between forests and humans in a way that most modern people cannot easily imagine. Beyoğlu Mayor Ahmet Misbah Demircan, Counsellor of the Embassy of Peru, Jose Zapata, Honorary Consul of Peru, Jak Hakim, Cervantes Institute Manager Pablo Martin Asuero, General Consul of Spain, Pablo Benavides, Trade Commissioner of Peru, Fernando Albareda and art lovers participated in its opening ceremony. Demircan, who opened the exhibition, thanked all staff members that took part in the event's planning and preparations. Albareda said the event was the first embassy-organized photography exhibition in Turkey and thanked the Cervantes Institute for their support. He highlighted the different geographic regions in Peru, such as its coasts, mountains and Amazon rainforest. The photographs present the lives, traditional beliefs and living conditions of the local Peruvian people. Albareda said the people who live around the Amazon River are surrounded by nature, and stressed there is no environmental pollution in Peru. "The exhibition portrays how humans live in harmony with nature around the Amazon region; they feel the nature that surrounds them," he said. Albareda emphasized that this relationship has been preserved for centuries. "Some local people live in protected areas. For years, these people have been living as tribes in different regions. They adopt old shamanic beliefs and earn their living through fishing and agriculture," he said.