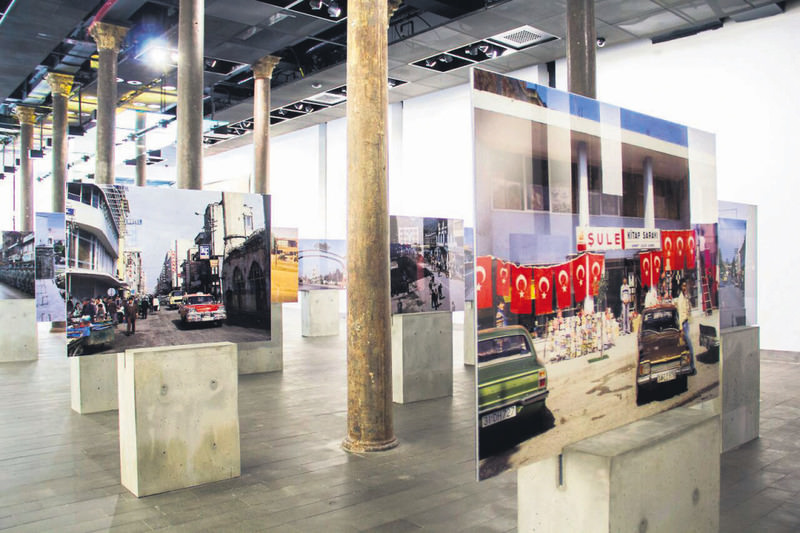 by Daily Sabah Aug 13, 2015 12:00 am
"Lost Shadows" consists of 50 photographs selected by Vahap Avşar from among thousands of images found in the AND Publishing Company archive. The artist has been working on imagery and issues of representation in print materials such as posters, postcards and advertisements for 25 years. In 2010, Avşar procured the rights to AND's exhaustive inventory. The works in the exhibition comprise of images that have never made it into print circulation. In "Lost Shadows" they are printed in rather large but identical dimensions and stand wedged in self-supporting concrete bases. Forming a "forest of imagery," the overall installation brings back the open and democratic exhibition approach of the architect Lina Bo Bardi in the São Paulo Art Museum in 1968.

"Lost Shadows" speaks of an era when there was neither direct calling nor the Internet; a time when it was common practice to send postcards with panoramas of faraway landscapes from a holiday, exile, or compulsory military service, to family members, friends and lovers.

The AND collection delivers a photographic journey initiated by photography safaris all around Anatolia beginning in the late 1970s. Wandering from village to village, the photographers, commissioned by AND, documented the streets, squares, buildings and the region's distinctive geography to be used as postcards and posters. The images capture a specific time of the geography. Signs and symbols, customs, gestures and body language, economics and even the politics of the era can be traced in the photographs. The most enigmatic aspects of the collection are those that have never been used, or have been excluded from the set of attentively manipulated and exposed arrangements. Unexpected moments, things that are not supposed to be in the frame, as well as inimitable poses, allow the photographs to unfold utterly different stories. There is nevertheless an oddity in treating the geography as if it were an "open studio" during the tense political environment of the late 1970s, which was then followed by the fearful period brought by the 1980 military dictatorship.