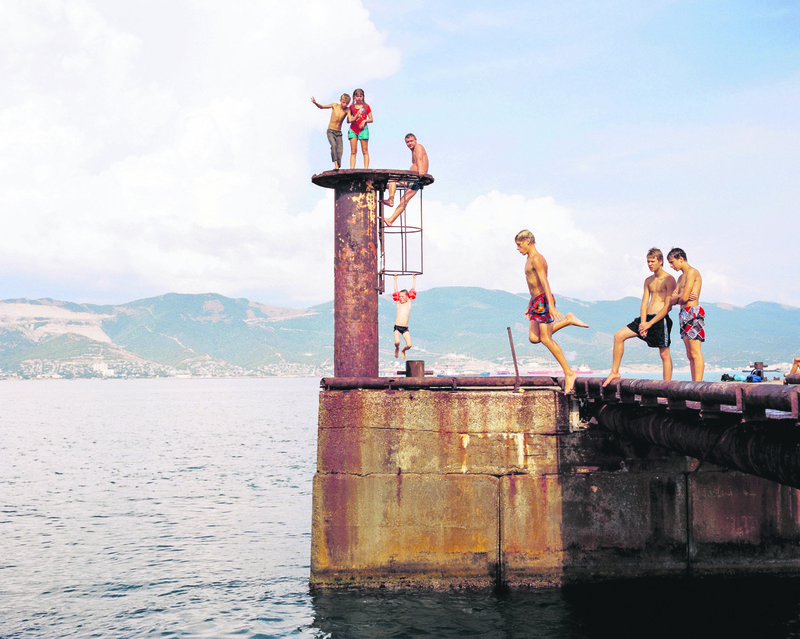 by Zeynep Esra İstanbullu Sep 24, 2015 12:00 am
The French Culture Center brings the photos of French photographer Mathis Depardon for an exhibition "Postcards from the Black Sea" running until Nov. 12. Started on Sept. 17, the exhibition gathers his photos taken in 5 countries - Bulgaria, Georgia, Russia, Turkey and Ukraine. His photos show the realities of a complex region. Here is critic Laurence Cornet's review on his work:

"Following a turbulent year reminiscent of harsh windy seas when he reported the uprisings in the Middle East in 2011, French photographer Mathias Depardon set off a tour in the Black Sea for a more poetical photography project. The visual poetry emerged from his travels in 5 countries for 2 months is full of difficulties like the region where Depardon strode along jagged rocky coasts. Although the sky is clear, the horizon looks smoky. The sea sparkles as well as is sui generis. The Black Sea takes its name from its state of mind. Depardon left current conflicts behind and led himself to dig into the lesser-known ones. He documents a region in conflict, where has been the center of different tensions and threatening storms for centuries. This region's resilient people have suffered from an economy full of burdens. Depardon's postcards shows a route with many stages. They are accompanied with detailed captions. Although the region has left alone, it has been the center of political incidents contributing the formation of different cultures. With his sorrowful photos and harsh words, Depardon brings audience a complex reality."

Born in 1980 in Nice, Derpardon studied communication and journalism in Brussels before working as independent photographer. Following his first project on illegal migration, he took interest in international agenda for years. He then settled in Turkey and dealt with the country's different problems. He is the Laureate of the Bourse du Talent in 2011 for his reportage "Beyond the Borders," which was displayed at the French Cultural Center as exhibition in 2013. Mathias has work published in Le Monde Magazine, Monocle, Elle, Internazionale, The Sunday and Times Magazine. His photographs have recently been included in the collection of the Bibliotheque Nationale de France.
RELATED TOPICS