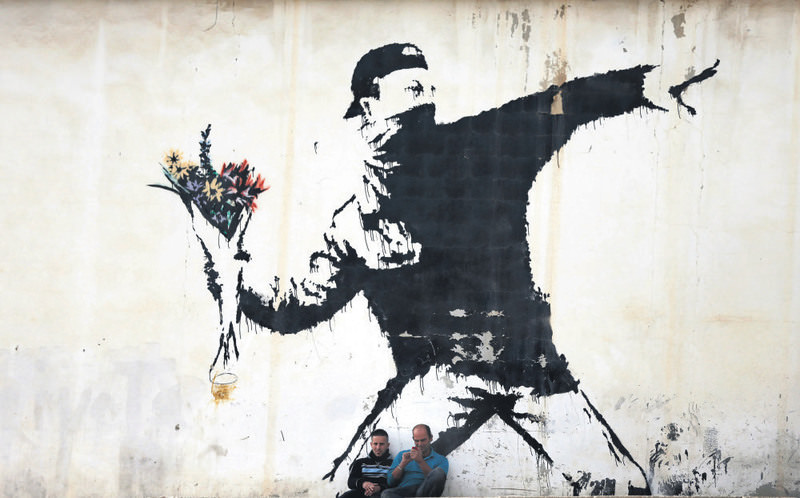 Famous graffiti of British street artist Banksy, painted on a wall of a gas station in the West Bank city of Bethlehem. (AFP Photo)
by Zeynep Esra İstanbullu Jan 09, 2016 12:00 am

Having garnered global attention with the striking themes of his unique street art created on walls in various countries, British artist Banksy's work will now be exhibited in Istanbul's Global Karaköy art gallery for four months beginning on Jan. 14

"The Art of Banksy," the biggest collection, which brings the mysterious street artist Banksy's works together, will make its world premiere on Jan. 13 in Istanbul. The exclusive exhibition will be inaugurated with a ceremony on Jan. 13 and will open to the public on Jan. 14 at Global Karaköy. The exhibition will take the viewer on a journey to the streets of London and other locals, and will also mark the grand opening of the art gallery, Global Karaköy, which is the cultural initiative of Global Investment Holding.

Curated by Steve Lazarides, the exhibition showcases special collections and installations of the artist that were produced in different periods of Banksy's artistic development, along with artworks borrowed from various collectors from around the world. Considered as the biggest Banksy collection in the world so far, the exhibition displays a total of 100 works by the street artist including "Girl with a Red Balloon," "Laugh Now" and "Maid in London," whose total estimated values are 20 million pounds ($29,193,500).

The exhibition, "The Art of Banksy," will get the Istanbul audience out of their normal routine, and offers an artistic experience that has never been seen before. Each part of the exhibition animates a different setting: The viewers may suddenly find themselves in the living room of an ordinary London house or on the rainy London streets. "Art of Banksy" promises an extraordinary artistic experience that will stimulate the viewer's five senses.

Banksy's works have been avidly discussed ever since 2011 when Stephan Keszler, a New York City gallery owner, cut some of the artist's works off building walls and attempted to sell them to high-end buyers at prices ranging from $40,000 to $750,000. Banksy made a statement about the sale, criticizing Keszler for ruining the originality of his works by removing them from their contextual surroundings. Subsequently, none of the paintings were sold, and the gallery owner accused the artist of sabotaging his business. The following year, Keszler sent the murals to Miami to exhibit the artist's works at the 2012 Art Miami Fair. Here, Banksy's works were placed on display for the first time together as a part of a major contemporary art fair. The display fueled the debate about the meaning and nature of street art. Although some art lovers boycotted the fair, Art Miami welcomed record numbers of visitors that year. The executives of the fair also supported their exhibition, and claimed that the exhibition was designed to draw attention to the "growing debate about the ethics and importance of showing 'site-specific' street art outside its original context."

Held with the contributions of the Culture and Tourism Ministry, "Art of Banksy" will take place under the sponsorship of Global Investment Holding, Istanbul Entertainment Group and Piu Entertainment. The exhibition, which will open its doors to art lovers on Jan. 14, will bring together street art enthusiasts from around the world.
RELATED TOPICS