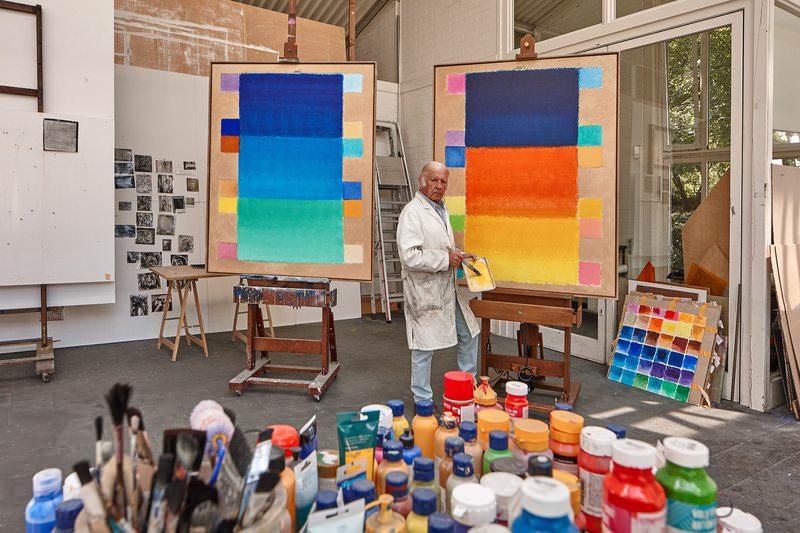 The Sakıp Sabancı Museum (SSM) is currently presenting the solo exhibition "MACK. Just Light and Color" by the co-founder of the ZERO movement, German painter and sculptor Heinz Mack. The ZERO movement was co-founded in 1957 by Mack and Otto Piene, and it depicts the new design principles and aesthetic ideas developed in the mid-20th century.

Speaking to Anadolu Agency (AA) during the exhibition's opening ceremony, Mack said: "My pieces, like all of us, require light and shadow. That's why my works are intertwined with light."

Emphasizing that the art academies were destroyed in Germany following WWII and the first ZERO exhibition took place in a demolished art gallery in Düsseldorf, Mack said: "We first started by cleaning that ruined place in the cold weather. However, there was staggering depression and melancholy in the air. We experienced the post-war void in the 1960s. It was not only an artistic void but also an intellectual one. We were mainly interested in the movements such as structuralism in France, Bauhaus and expressionism in Germany, as well as suprematism in Russia. We started questioning ourselves, asking, 'Where are we headed?' The artists of my generation tried to work on humble canvases with only one color just like monograms."

While explaining that he wanted to move forward with his art step-by-step and the ZERO movement was a part of this progress, Mack said: "The 1950s was a period where I could paint however I wanted. We were even painting by throwing the brush at the canvas. I sometimes thought that I had chosen the wrong line of work. Everything was tried and experienced already; I, on the other hand, wanted to try something new."

Mack also said he worked on black-and-white paintings from 1957 to 1967. "In my art while the compositions are denied, the structures find themselves – I mean the paintings without colors. I was later interested in artistic monuments like large-scale sculptures. I again started using colors in 1991 and went back to painting," Mack said.

"I visited Maghreb countries and realized that all the great civilizations were built around the Mediterranean basin," he said. "These places have a light and clear atmosphere. While the thought of the people living in the West and London are hazy, people living in the East have different ideas under the bright sun. Eastern art has its own bright, artistic understanding without abiding by any figurative rules. The ornaments are formed with only one motif, when an abstract form of constant motifs are repeated by constituting a rhythmic and arabesque movement." Mack added that during his artistic career, he was greatly affected by Eastern and Islamic art. He also said ZERO exhibitions have been visited by 700,000 people so far from around the world. The exhibition at SSM can be visited until July 17. The exhibition presents a rich anthology of paintings, sculptures and kinetic art pieces that Mack created throughout his long and productive career, originating from the early period pieces forming the backbone of the ZERO movement. Curated by Sabancı University SSM Manager Dr. Nazan Ölçer and Royal Academy of Arts London exhibitions director and art historian Sir Norman Rosenthal, the exhibition is of vital importance as it corresponds to Mack's celebration of his 85th birthday and 60th anniversary of his long career along with a series of exhibitions taking place in the Far East, Europe and Turkey.
Last Update: Feb 20, 2016 1:17 am
RELATED TOPICS