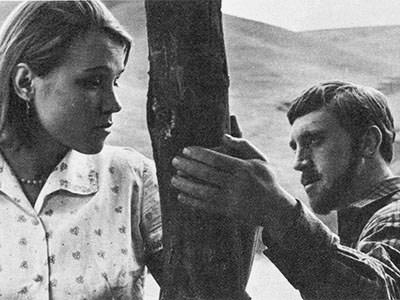 by Daily Sabah Mar 01, 2016 12:00 am
For this grabbing debut film, Kira Muratova both directed and starred as Victoria who works as the head of a local housing office in a Soviet-era town. Valentina has been having an affair with Maxim, a free spirit who occasionally passes through town during his research trips. Valentina takes a village girl named Nadia in as a housekeeper, but has no idea that she also had an affair with Maxim during one of his trips. The lives, memories and desires of these characters are woven together through Muratova's subtle and detailed montage, and the flashbacks show us how these two women idealize Maxim. Depicted as that period's "Russian Bob Dylan" and singing anthemic underground songs, Vladimir Vysotsky stars as Maxim. Banned and shelved until the Glasnost period, "Brief Encounters" upset censor officials with its fearless perspective toward everyday Soviet life and free moral understanding. In this film, Muratova decidedly features the horrible housing conditions, lack of public facilities and the growing desperation of young workers who left the town to try their luck in the city.