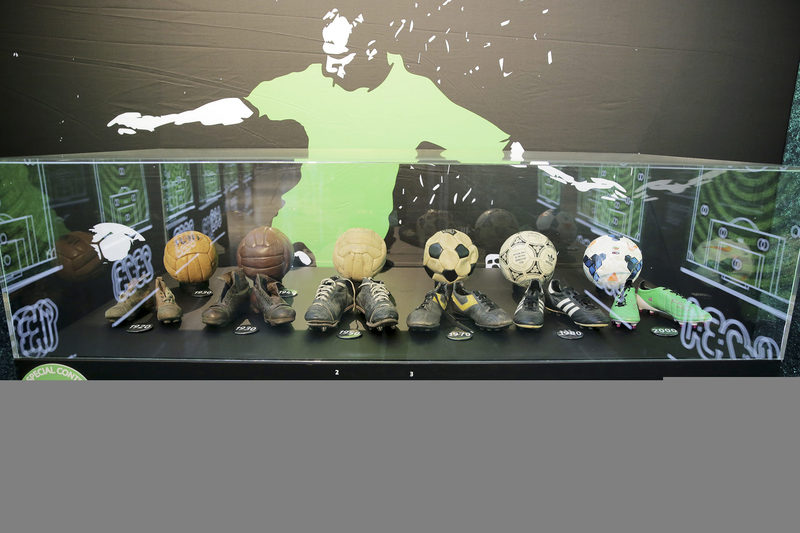 My knowledge of football equals my knowledge of chemical science: I am one of those unlucky souls who have always preferred less fashionable sports like swimming, tennis and handball to our national obsession with football. So I was not expecting to be entertained this much when I entered the Istanbul subway to visit Zorlu Performing Arts Center where a new exhibition entitled "Goal! The football experience" is on display until June 5.

The exhibition, according to its website, offers "a journey through the legendary moments of world football, which the visitors will be able to experience first-hand, by following an exhibition path full of materials, items and interactive contents."

"From the trophies and the historic medals of the champions down to the symbolic objects that made the history of football, from the first soccer balls to the historic kits and football uniforms including those worn by Pele and Maradona, down to Leo Messi's and Thuram's shoes... A mind-blowing collection of original items and sports memorabilia set within a unique experiential and interactive exhibition: that's what 'Goal! The football experience' is all about."

Two historical objects attracted my interest the most: a football from the 19th century described here as "the world's first soccer ball" has been placed near the entrance, serving the role of Mona Lisa of this exhibition. It is a British football, I learned. Visitors are not allowed to touch it, and the only exception to this had been the manager of Turkey's National Football Team, Fatih Terim, who asked to hold the world's first football in his hands.

Another fascinating object on display here is the Jules Rimet Trophy, a trophy that was awarded to the winners of the FIFA World Cup Association football tournament from 1930 to 1970. Trophies on display in the show include the FIFA World Cup and the Intercontinental Cup - always useful to use in your selfies I guess, judging from the visitors who were busy taking pictures with them on the day of my visit.

The exhibition has no catalogue, and visitors should get ready for a complete lack of informative texts throughout the show. Curators decided to hand every visitor a tablet computer at the entrance instead. Visitors are expected to navigate the exhibition with those. 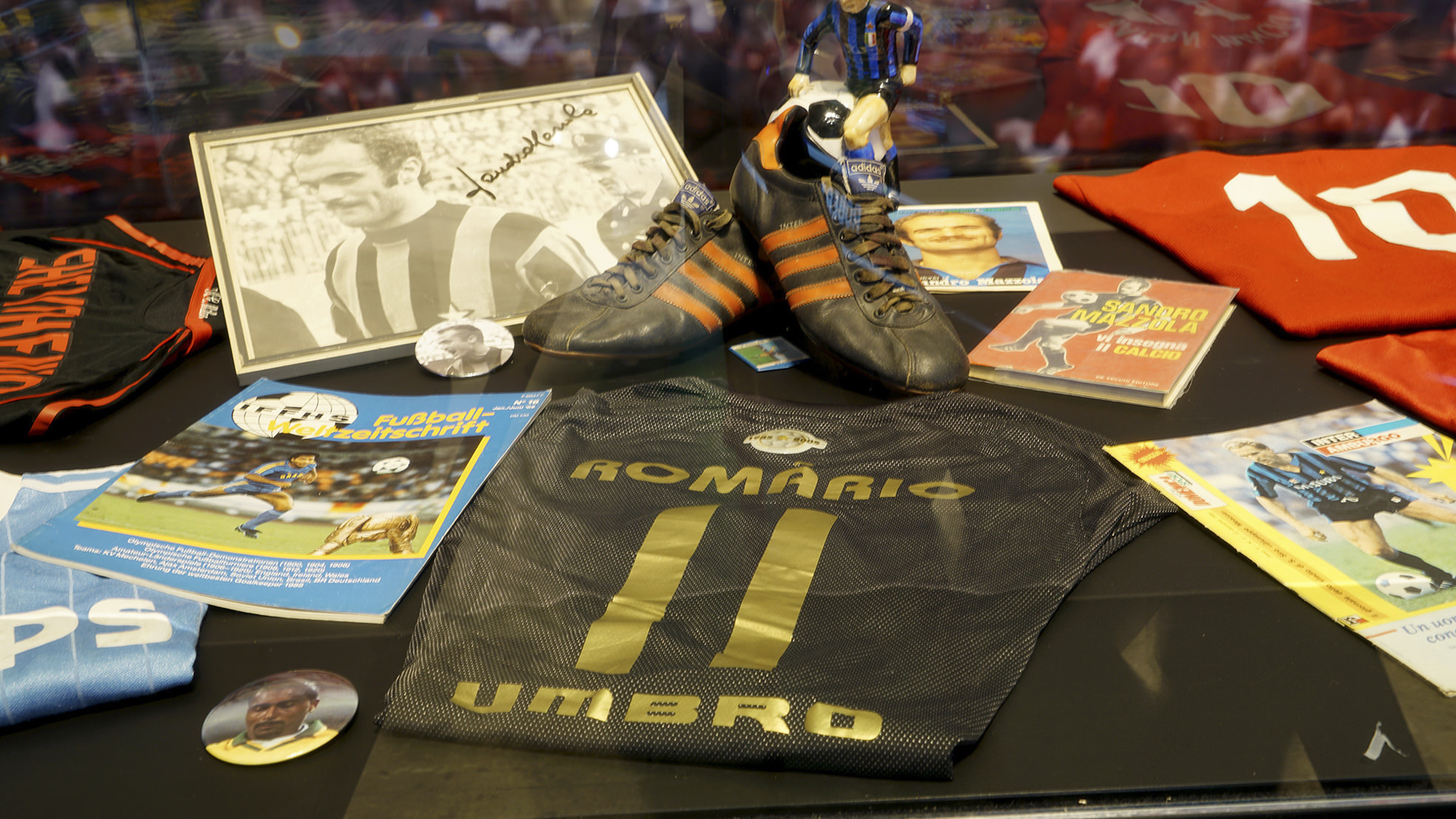 "Goal! The football experience" is divided into sections in the manner of a football pitch. We begin with the goal and the goalie where the most famous goalies are introduced to the viewer. We then move to the center spot. Jerseys and crampons belonging to Pele, Diego Armando Maradona, Eusebio, Cristiano Ronaldo, Frank Rijkaard, Arjen Robben, Lionel Messi, Luis Figo, Nilton Santos, Garrincha, Marco Van Basten, Michel Platini and Zinedine Zidane among many others are on display for fans of the world's football legends. 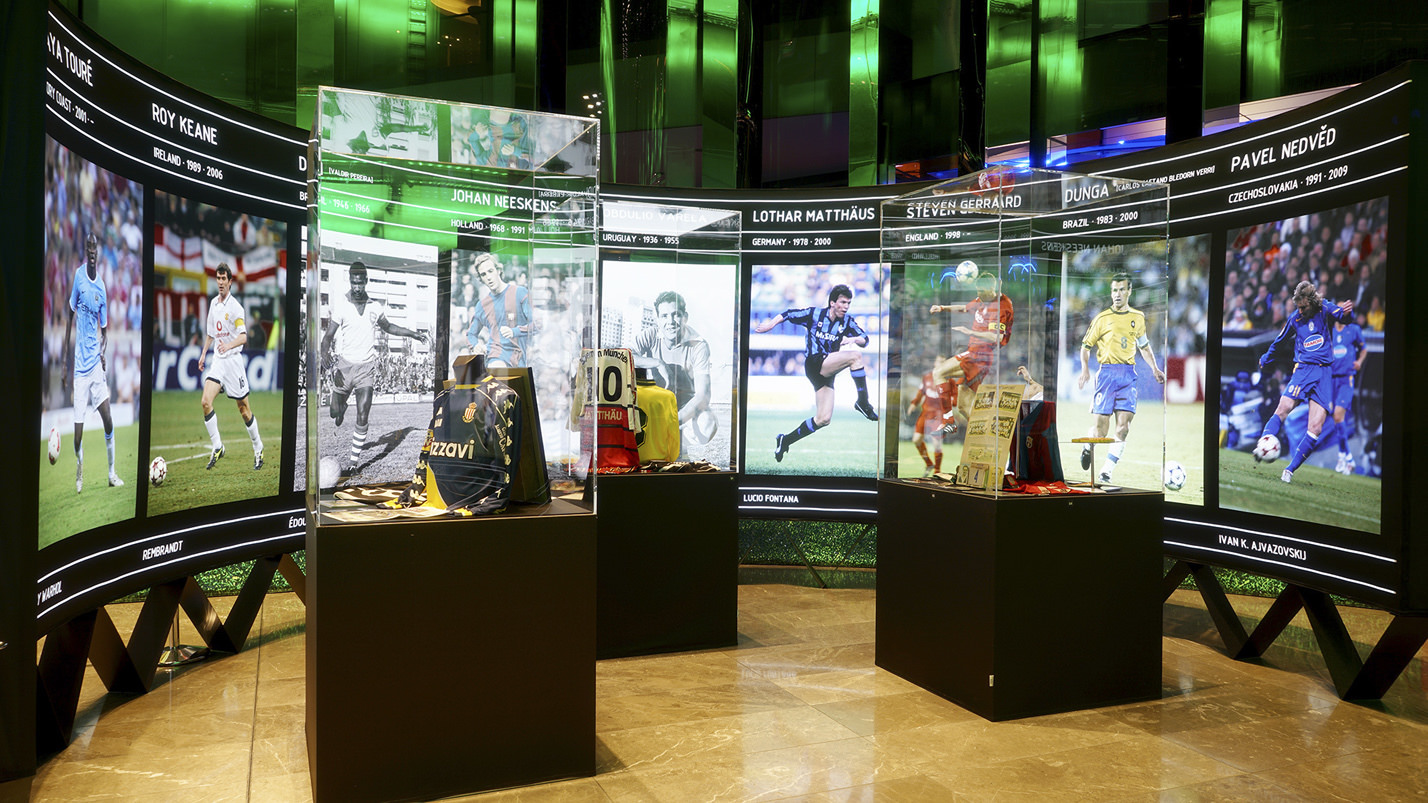 Tablets not only provide information about the objects exhibited in the show; they also help visitors form their dream teams and then play football games with each other. "Another unique aspect of the exhibition is the interactive experience. Tablets will be handed out to interested visitors and make sure they get the best out of this exhibition," according to the exhibition website. "You will be able to pick your dream team via your given tablet and reach all kind of information about the players and the rest of the show." Plasma screens placed at the exhibition hall display results of these interactive football games. Located in an 800-square-meter area, the exhibition resembles a massive playground. Open to public from 11 a.m. to 9:30 p.m. everyday, it offers visitors long hours of game play.

The show features 600 objects that have been meticulously picked from the world's most comprehensive football collection, the "World Football Collection," which has more than 300,000 objects and is valued at over 30 million euros. Organized by the promotion company Barley Arts in a partnership with Sefada Entertainment, the show's co-producer is Claudio Trotta. First inaugurated at the Park Exhibition Center in Moscow in 2016, Istanbul is the second destination of the show. After Istanbul, "Goal! The football experience" moves to Brussels, London, Lisbon and Budapest.

One of the fascinating figures behind the project is Umberto Paolucci Pierandrei, CEO of the World Football Collection and a football professional who worked with teams like Inter Milan and Real Madrid. Pierandrei also worked for the world's leading opera house, La Scala.

Born in 1973, Pierandrei started his career working for the NBA and Upper Deck in the U.S. He then moved to Milan where he worked in the marketing offices of Inter Milan. He was marketing and new business director there when he resigned in 2002. Pierandrei worked as international business director at the La Scala Theater. After two years at this cultural temple, he moved to publishing and wrote for La Gazetta dello Sport. Pierandrei also served as curator of the San Siro Museum of Inter and AC Milano and worked for Wembley Stadium, Real Madrid and the Italian Player Association as a sport-marketing professional.

Thanks to Pierandrei's career, which bridges the worlds of art and football, the exhibition devotes lots of space to visual arts, featuring posters of famous artworks that curators have linked to legendary football players. For example, Piet Mondrian's 1944 work "Victory Boogie-Woogie" is displayed as an artistic parallel to Andrea Pirlo's gifts as footballer. Joan Miro's "The Harlequin's Carnival" is associated with Andres Iniesta. Giannia Rivera, meanwhile, is presented as a football player reincarnation of Sandro Botticelli's "The Birth of Venus."

The curators also matched football players with artists. The Vincent van Gogh of football, in their view, is Omar Sivori. Roberto Baggio is the Paul Gaugin of football pitches. Laszlo Kubala is not so different from Peter Paul Rubens, and Michel Platini resembles Marc Chagal. And what about the late Johan Cruyff? According to the curators, Cruyff, who died on March 24, was the Gustav Klimt of football. In the exhibition they show their gratitude to the legendary player by placing a rose next to Cruyff's jersey.
RELATED TOPICS