At an Istanbul gallery, an ‘Almanac' of past exhibitions 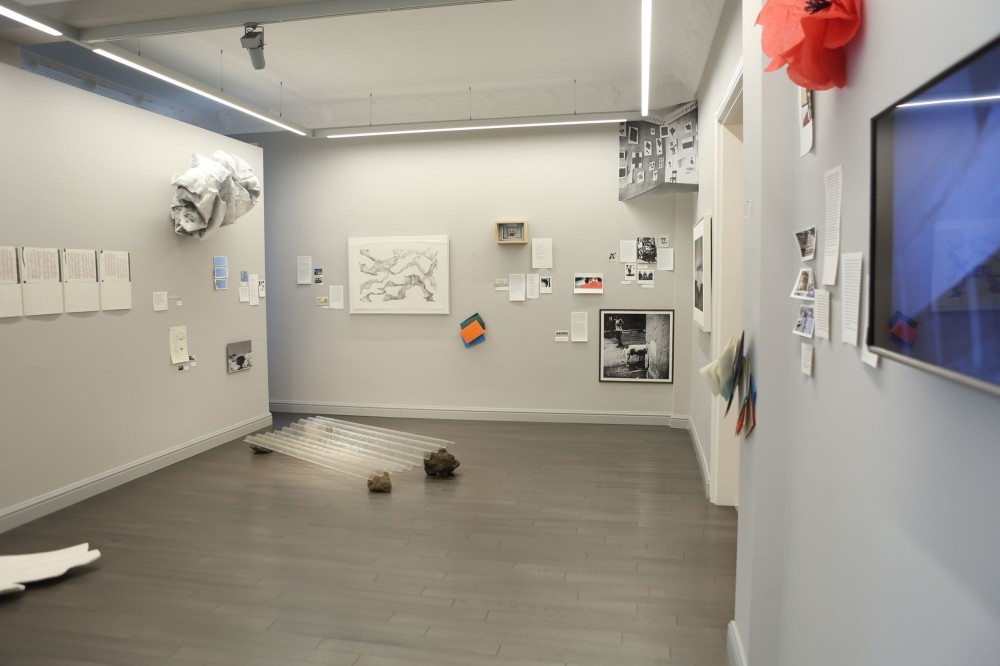 Located on Istanbul's Maçka Street, Ariel Art Gallery is one of the city's most exciting art spaces. This summer, Ariel is hosting ‘Almanac 01,' featuring works by some of Turkey's best young contemporary artists, including Deniz Gül and Sibel Horada

Last Thursday, when temperatures in Istanbul started rising again and the locals seemed fed up with the humid weather, I found myself in Narmanlı, a historic building at the intersection of Maçka Street and Teşvikiye. On the second floor of this exquisite Istanbul apartment, I approached the doors of Ariel, an art gallery that offered visitors a few hours of refuge.

Inside the gallery I was surprised to come across an exhibition with the curious title "Almanac 01." As readers, we are accustomed to see almanacs from magazines and newspapers at the end of the calendar year. But it is not every day one sees an almanac prepared by an art gallery.

"Almanac 01 gathers six exhibitions realized in the season of 2015-16 at Ariel," according to the exhibition program. "Certain works from the exhibitions, posters, videos, images from the panels, texts, quotes, books, booklets and all the documentation come together to compose a polyphonic music this time." 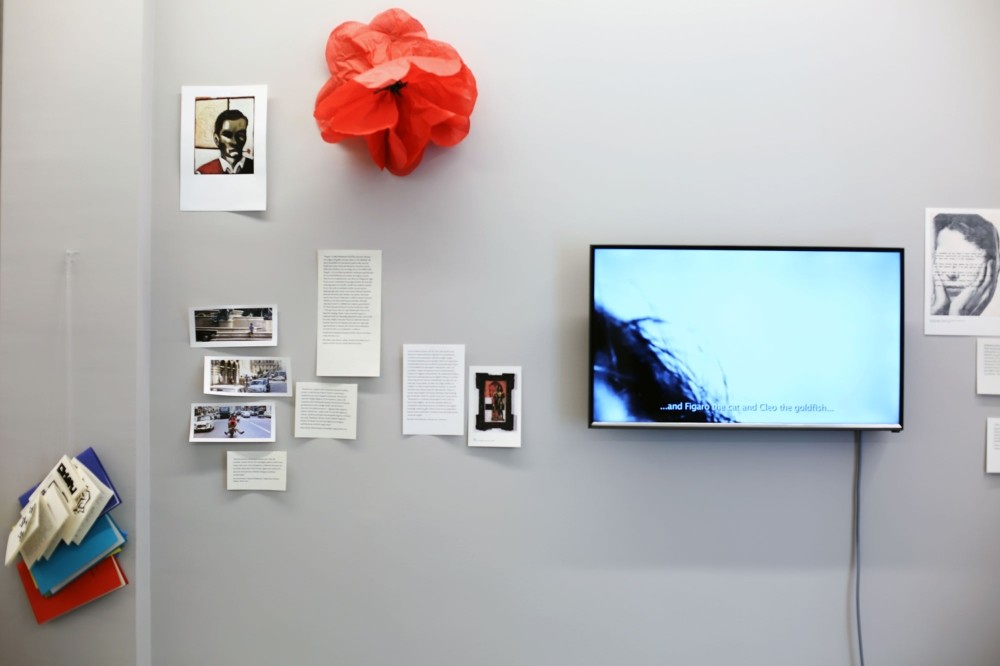 To my mind, the word almanac implies a certain type of commitment: one for those who produce the almanac and another one for those whose works are brought together in it. "As in the definition of the word 'almanac,' we aim to see and show the annual accumulation of our exhibiting practice, which also shaped the identity of Ariel," Ayşe Orhun Gültekin, one of the curators of the show, told Daily Sabah. "The selected works shown in previous exhibitions came together in an unusual and almost excessive way with each other as well as with the documents that we collect for each show. We select the works by considering the relation between them and the potential behind their coexistence to reflect a balanced sense of the concepts we have been working on."

All the posters for Ariel Gallery are designed by Turkey's legendary graphic designer Bülent Erkmen, I learned. The curators briefly inform him about the conceptual framework and discuss the details; then Erkmen comes up with a sign, a poster and an invitation that represent the concept of the exhibition.

Derya Yıldız, who curated the show with Gültekin, talked about some of the shared features of the works on display. "We determine themes for the exhibitions we organize during the year," she said. "A line from a Mallarme poem, a film by Pier Paolo Pasolini, the idea behind the work of Aby Warburg have formed some of our previous themes. We produce video-interviews with the participating artists, prepare hand-made booklets from the writings by and about them, collect books to build a library about the theme. In this one we put everything that has been produced so far together. The works and the subsidiary materials are being exhibited side by side in 'Almanac 01.'"

A gallery's relationship with artworks inescapably changes when the curators display the same works in different configurations, as is the case in this exhibition. "We have a small exhibition space, so we tend to keep exhibitions minimal and organize them with a limited number of works to maintain the balance between them and the themes," Gültekin said.

"In 'Almanac 01,' we don't have one but six themes. This change of procedure led us to use space different than before. We didn't place the works where they were originally installed, instead we placed them where they can enrich each other and the space in order to create 'a polyphonic music.'"

One of the highlights of the exhibition is Deniz Gül's "Ç," a work that features a playful approach to language, reflecting one of the key themes of the show. 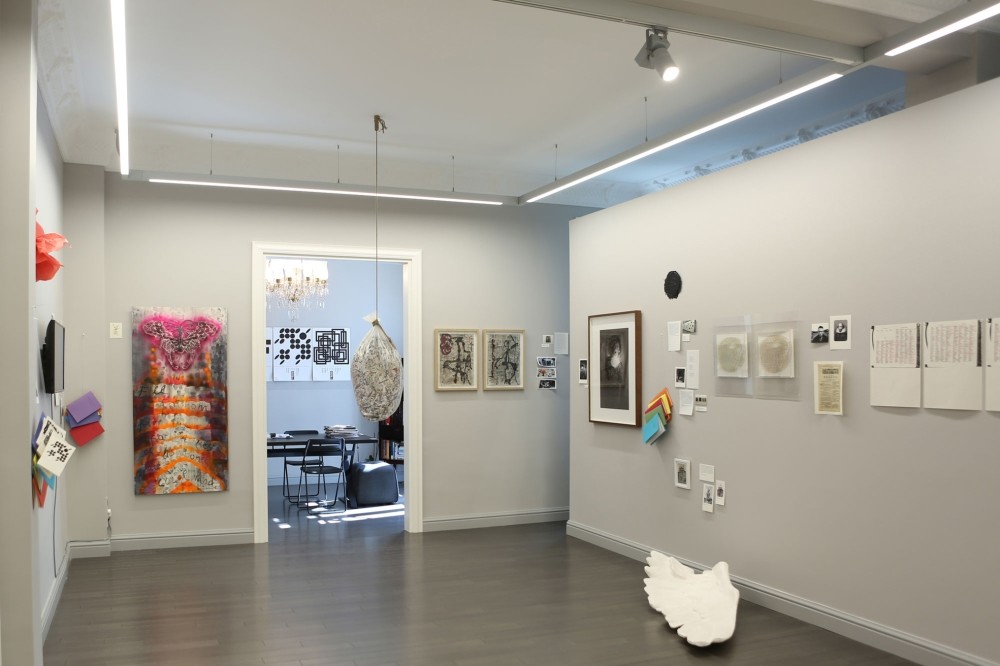 "Deniz Gül's 'Ç' took place in 'Almanac 01', as 'A' did in 'Space Antelope Space Air,'" Yıldız explained. "In these works Gül intervenes in a spelling book by 'correcting' the words. The power the artist has, of rejecting imposed reality and declaring her own, reveals itself through Gül's work in a very subtle yet daring way. We believe this adds an important layer to the approach of both this exhibition and Ariel."

Another highlight, Sibel Horada's "A Fall," features text fragments from a project where wings and a certain fall play key roles. "Sibel Horada's 'A Fall' (A 1:3 Scale Copy of the Gigantic Stone Wing) was one of the works first shown in the 'Conference of the Birds,' which was shaped around Ferid ud-Din Attar's Sufic work 'Mantiq ut-Tayr,'" Gültekin said.

"The exhibition explored the dichotomies of everyday life as in the journey to the Simurgh in Attar's book. Because of this superposition with Horada's own journey, this framework enabled other interpretations for 'A Fall' other than it has, when it was shown in a broader exhibition in Daire Gallery."

Yıldız added: "The thing we wanted to achieve with 'Almanac 01' was to prevent works from taking precedence over each other, over the space and documentation. To us, the highlight of this exhibition is having 'The Tempest' by Selim Birsel positioned under the 'Sky Spotting Stop' by Seyhun Topuz and film stills from Pier Paolo Pasolini's movie, seeing Silva Bingaz's photograph 'Vartuhi 2' next to a part of Ayşe Erkmen's installation 'According to its Color,' being able to watch Pelin Kırca's animation 'One Moonless Night' right after IRWIN's video 'Black Square on the Red Square,' reading the poems Fernando Pessoa's 'Iniciacao' and Ruken Kaplan's 'A Bed of Roses Nothingness Cover' on the same wall, observing the image of the exhibition '0,10. The Last Futurist Exhibition of Painting,' which is hung in the corner where walls and the ceiling intersect as Kazimir Malevich installed his 'Black Square' like an icon."
RELATED TOPICS