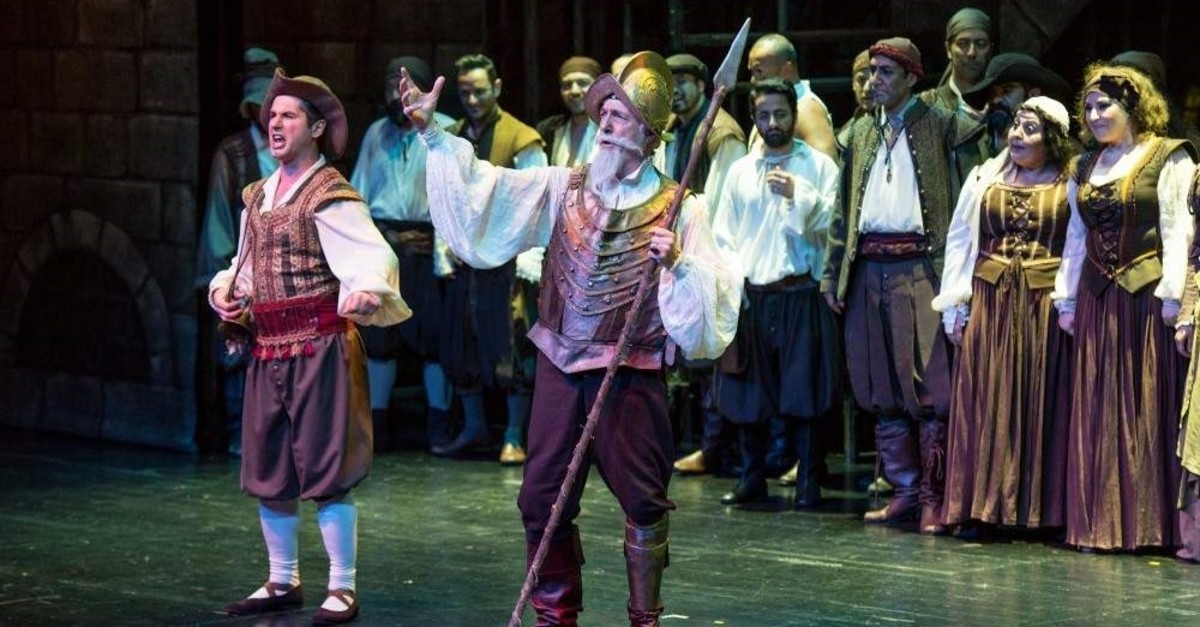 A scene from ,Man of la Mancha.,
by Daily Sabah Oct 27, 2019 1:59 pm
This season the Istanbul State Opera and Ballet will stage the musical "Man of La Mancha," which premiered last season.
The musical was composed by Mitch Leigh, with text and lyrics by Dale Wasserman and Joe Darion, translated into Turkish by Güngör Dilmen and directed by Murat Göksu.
Hüseyin Kaya, who will also lead the orchestra, is responsible for the music, while the set decor was done by Ferhat Karakaya, the costume designer was Gizem Betil and light design was done by Taner Aydın.
The world premiere of the work was in Connecticut, U.S. in 1965, the same year as its Broadway premiere. The story takes place in the late 16th century. The tax collector, soldier and writer Miguel de Cervantes and his aide Sancho are imprisoned by the Spanish Inquisition on the grounds that they oppose the monastery. The prisoners here confiscate all of Cervantes' belongings. Cervantes, however, persuades them to return the handwritten texts to him and makes a dramatic defense by reviving the story of Don Quixote from Mancha. So, the touching and passionate story of the honorable knight Don Quixote, who does not want to believe that knighthood is dead and lives in his own crazy world, begins.
The musical will be performed at the Süreyya Opera, Kadıköy, in March and April.
Suat Arıkan, Hakan Aysev and Murat Göksu will play Don Quixote; Çağrı Köktekin, Yücel Özeke and Onur Turan will play Sancho; Şebnem Ağrıdağ Kışlalı and S. Ürben will play Aldonza; Gökçe Şenyüz and Barbaros Taştan will play the innkeeper; Serkan Bodur and Ufuk Toker will play the priest and Can Reha Gün will play Dr. Carrasco; Begüm Karacasu and Ayşegül Karkıner will play Antonia.
Last Update: Dec 20, 2019 1:15 am
RELATED TOPICS