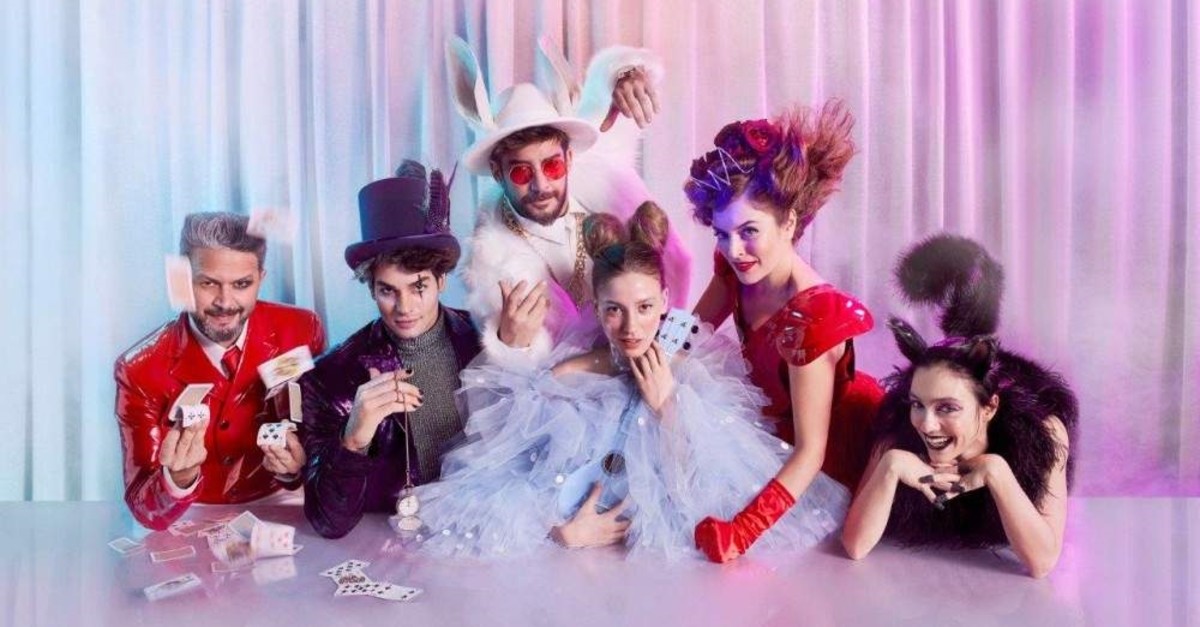 The ,Alice, musical stands out with its magnificent stage designs, music and costumes.
by Daily Sabah Nov 01, 2019 4:26 pm

As a landmark venue for art events in Istanbul, Zorlu PSM is once again primed to offer an exciting program for music enthusiasts this November

The Zorlu Performing Arts Center (PSM) in Istanbul will be hosting a series of events to give its audience unforgettable moments this week. Claptone, who hides the most beautiful sounds of deep house under signature his golden mask, Mahmut Orhan, who draws inspiration from genres such as indie dance and nu disco, Saturnus, the most successful name of melancholic doom, and Ayşe Sicimoğlu, who creates her own music because she thinks she cannot fit into any category, will be performing at the PSM to take their audience on an unforgettable adventure.
Claptone will perform on the Turkcell Stage, taking stage at 10 p.m. on Thursday, Nov. 7. Berliner producer and DJ Claptone, who hides the finest timbres of deep house under his golden mask, is back at Zorlu PSM! The mysterious DJ, who usually has boundless energy and dance-filled melodies, does not neglect to touch on solitude and heartbreak though, and he does it so deeply. The artist, who came into our lives with his solos incorporating familiar melodies, will be taking his audience on a sonic adventure with a costume resembling a mystical creature.
Mahmut Orhan will also be performing on the Turkcell Stage ready to get the crowd going at 11.00 p.m. on Friday, Nov. 8. Inspired by genres such as deep house, indie dance and nu disco, which he believes has helped developed his creativity and imagination to create a name for himself in a very short time, the successful producer and DJ Mahmut Orhan will offer his audience an unforgettable night with his special performance for the closing night of Brand Week Istanbul.
Saturnus will perform at %100 Studio at 9 p.m. on Saturday, Nov. 9. As the successful figure of melancholic doom, Danish band Saturnus, co-founded by Thomas A.G. Jensen and Brian Hansen in 1991, managed to expand its scope to Russia, Moldova, Ukraine, Belarus, Italy, the Netherlands, Armenia and Georgia over the years.
The Ayşe Sicimoğlu Quartet will perform at touché at 9:30 p.m. on Nov. 9. Ayşe Sicimoğlu, who creates her own music because she thinks she doesn't fit into any box, combines classical music with the pop and rock sounds of the 1980s and 90s with a retro vibe, and performs jazz and Turkish rock covers at times.
The "Alice" musical will be ready to perform on the Turkcell Stage at 9 p.m on Saturday, Nov. 9 and 4 p.m. on Sunday, Nov. 10. “Alice,” a contemporary musical adaptation of Alice in Wonderland, one of the unique works of world literature written by Lewis Carroll, will be greeting its audience for the first time in the new season after being staged for the first time last season. Co-producted by BKM, Zorlu PSM and id İletişim, and the first big production musical in Turkey, stands out with its magnificent stage designs, music and costumes. The show features the thrilling growth story of a young girl who is blown away in today's virtual world where she is isolated by real-life communication. Serenay Sarıkaya, who took to the stage for the first time as “Alice” and earned brownie points from the audience, will be accompanied by experienced players Ezgi Mola, Enis Arıkan, Merve Dizdar, İbrahim Selim and Şükrü Özyıldız in the lead roles.
The Zorlu Children’s Theatre's “Cardboard City” will put on a show at the Turkcell Platinum stage at 12 p.m. on Nov. 9-10. The Zorlu Children's Theater, founded to mark the 50th anniversary of Zorlu Holding under the roof of the Mehmet Zorlu Foundation and introducing more than 800,000 children to theater since 2003, continues to promote theater's educational, instructive and entertaining aspect in its 15th year. Written by Serdar Saatman and directed by Gaye Cankaya, “Cardboard City" continues to offer a fun and enthusiastic time for children. As a unique children's musical, it introduces the beauties of art to children with its colorful atmosphere and educational messages.
Last Update: Dec 20, 2019 1:22 am
RELATED TOPICS