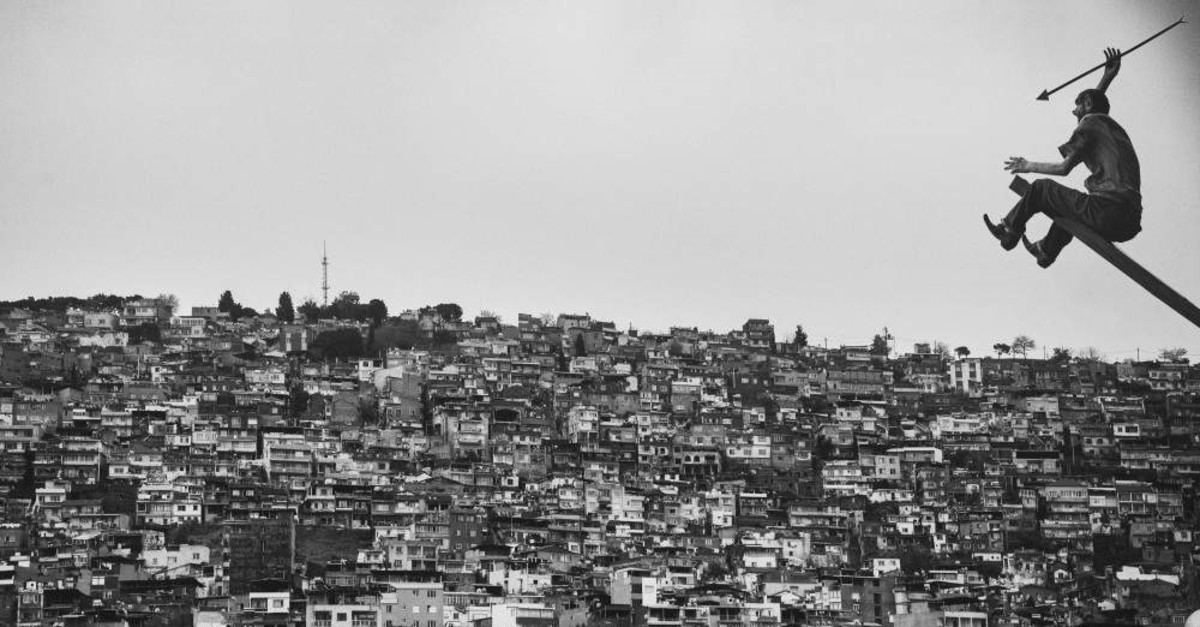 ,Kadifekale, by Cem Turgay in ?zmir.
by Daily Sabah Dec 05, 2019 2:55 pm
Pera Museum in Istanbul’s Beyoğlu district takes visitors on a journey through the art of photography, from the Cyclades to Mount Sinai. Inspired by the first photography expedition in 1839, the “A Road Story: 180 Years of Photography” exhibit explores the route of this trip from west to east. In the show, curated by Engin Özendes, 10 photographers from Turkey interpret more than 30 historical cities from Marseilles to Damascus again 180 years later using today’s techniques and current perspectives.
“A Road Story: 180 Years of Photography” opened on Dec. 5 and will continue until March 1, 2020.
This very new exhibit is the unique successor of Pera Museum’s various photography-themed exhibitions ranging from photojournalism to photo art. Özendes explained: “While planning this visual trip, we never thought taking photographs in certain locations could be more difficult today than 180 years ago, given today’s superior means of transportation and communication. This great project took two and a half years to complete and turned into a true road story from the first to the last traveler.”
The exhibit features photographers Coşkun Aral, Laleper Aytek, Ali Borovalı, Murat Germen, Sinan Koçaslan, Yusuf Sevinçli, Alp Sime, Lale Tara, Serkan Taycan and Cem Turgay.
Interpreting the artists featured in the exhibit, Özendes said, “Serkan Taycan introduces us to Marseille, Livorno, Malta and Rome with his photographs reflecting a critical and contemporary approach. Laleper Aytek traces unrelated details and moments of people, places and situations on the island of Syros. Ali Borovalı photographed Paros, Naxos and Santorini islands in his series focusing on nature and local culture and interprets the islands with his simple yet realistic, artistic style. Murat Germen uses photography as a means of expression and study instead of conveying directly what he saw in Alexandria, Cairo, Luxor and Suez. Knowing the Middle East and its constant turmoil well, Coşkun Aral transfers his experiences in Mount Sinai, Gaza, Bethlehem, Jerusalem, Nablus, Saida, Deir al-Qamar, Damascus and Tripoli from the perspective of a photojournalist. While Sinan Koçaslan tries to introduce Baalbek and Beirut with a modern approach, Yusuf Sevinçli prefers to depict Larnaca and Rhodes through daily experiences, interactions and the environment. Lale Tara went to Kos and took photographs on the island like a visual storyteller and an experimental player, creating a different atmosphere for her story by preparing for her shoots like one would create a movie set, complete with costumes, location scouting and lighting. Cem Turgay employes his experimental style to photograph İzmir, based on pastel-colored lights, hazy shadows, and critical details. Alp Sime photographed the daily life in Çanakkale and Istanbul, using a modern language and an aesthetical and powerful expression in his realistic black and whites.”
The invention of photography and a trip to the East
Those interested in photography all recognize 1839 as a special year. The invention of photography was announced on Aug. 19, 1839. Oct. 21, 1839, marks the beginning of the first journey of photography. French painter Emile Jean Horace Vernet, painter Charles Marie Bouton, who is among the inventors of the Diorama technique, and daguerreotypist Frederic Auguste Antoine Goupil-Fesquet departed from the Port of Marseille in October 1839 to take photographs. The team passed through Livorno, Malta, Syros, Paros, Naxos, Santorini, Alexandria, Cairo, Luxor, Suez, Mount Sinai, Gaza, Bethlehem, Jerusalem, Nablus, Sayda, Deir al-Qamar, Damascus, Tripoli, Baalbek, Beirut, Larnaca, Rhodes, Kos, İzmir, Dardanelles, Istanbul and Rome and returned to Marseille six months later in April 1840. Even, Frederic Auguste Antoine Goupil-Fesquet conveyed his impressions about this journey in his book, “Voyage d’Horace Vernet en Orient,” published in 1843.
Last Update: Dec 20, 2019 2:10 am
RELATED TOPICS